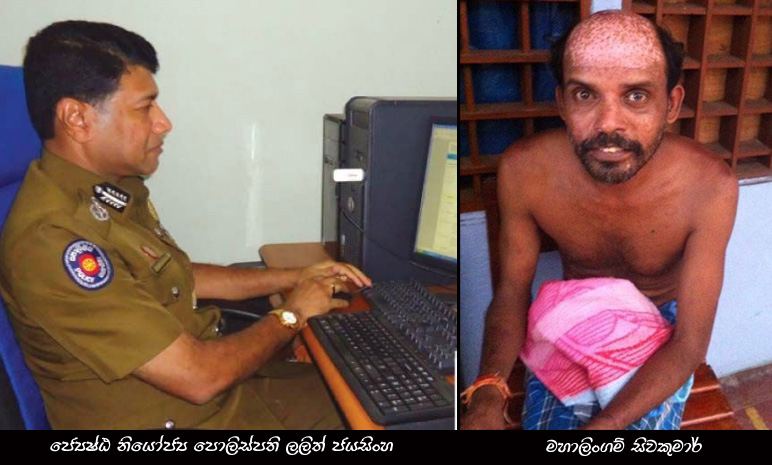 (Lanka-e-News- 24.May.2015, 7.15PM) The senior DIG Lalith Jayasinghe in charge of the north had reportedly taken a bribe of Rs. 4 million to release the prime suspect Mahalingam Sivakumar alias Kumar who was apprehended by the residents in the north and handed over to the police in connection with the brutal rape and murder committed on the schoolgirl Vidya , according to information seeping from within the police itself , and according to stories doing the rounds  across the whole of north.

The main suspect who was  handed over to the police was arranged to make good his escape when he was being transferred to the hospital for treatment to his wounds , on the instructions of DIG Jayasinghe .

Sivakumar who fled to Colombo had taken lodging at Wellawatte in a lodge. The lodge owner noticing the bruises ( the result of attacks launched by the people who apprehended him) on Sivakumar’s body had informed the Wellawatte police , whereupon the latter had arrested him again. It is to be noted that Sivakumar was arrested by accident the second time , and not through the police efforts .Hence , if the lodge owner had not informed the police , Sivakumar would have bolted from the country.

For all these arrangements made and assistance extended to the criminal to escape , it is the senior DIG Jayasinghe who is responsible.

This is the same DIG who was in charge of the south during the ex president Mahinda Rajapakse’s reign and used by Mahinda to cover up all the crimes and illegal activities committed by  the last regime in the south. Now , after Jayasinghe moved into north as senior DIG in charge  , owing to his corrupt and criminal activities in the performance of his official duties, the whole of north was plunged into  a state of anarchy over the rape and murder of school girl Vidya incident recently. It is most deplorable that a senior DIG who is responsible to maintain law and order, had on the contrary fomented unrest and lawlessness among the people.

IGP Ilangakoon who toured the north twice in connection with this incident ,  instead of taking stern action against this criminal senior DIG and interdicting him which punishment he richly deserves ,transferred  a group of subordinate officers and suppressed the whole criminal episode .

The action of the IGP is  clear proof that his secret   aim was to  sabotage  the sublime goals  of the government of good governance  ( the same IGP earlier on said, prohibition of full face helmet was  unnecessary at an  unnecessary time and inopportune moment).

It is a question on the lips of the police personnel and the people of Jaffna , whether the IGP also pocketed a share of the bribe of Rs. 4 million collected by Lalith Jayasinghe? for , there is no other explanation that can be offered to justify the action of the IGP who transferred the subordinate officers without interdicting the senior DIG who is the  biggest culprit.

Based on information reaching Lanka e news inside information division ,the next conspiracy of Ilangakoon is:

In the face of the mounting protests and opposition of the people against Lalith Jayasinghe , it is Ilangakoon’s ploy to transfer senior DIG Pujitha Jayasundara stationed in Colombo to the north , and get down Jayasinghe to Colombo. Ilangakoon may be trying to justify his move on the ground that Pujitha who maintained an untarnished reputation while in the East will bring the situation under control in the north. But this is in fact a plot hatched by Mahinda Rajapakse and Ilangakoon conjointly .

The special financial crimes investigation division (FCID) probing into financial frauds is now under Pujitha Jayasundara who is efficiently and effectively discharging his duties. If Lalith Jayasinghe  replaces Jayasundara, it will render possible to manipulate the investigations which are currently in progress against the Rajapakses, their hidden crooks and cronies   who are being flushed out from their nooks and crannies where they are hiding. This plan  is also to enable Rajapakse to collect information secretly in regard to the investigations through Jayasinghe.

What is being urged by the people  from the government of good governance  is : without  converting  the police into a pavement circus of clowns , take appropriate action duly, seriously  and lawfully , meaning that the senior DIG Lalith Jayasinghe who was at the bottom of the murder , rape and mayhem in Jaffna be immediately interdicted  ,and hold an investigation pertaining to him , without which no inquiry will be availing , because Jayasinghe being  at the top is so resourceful he  can certainly foil and muck them  up .