Defeated dejected MaRa lies about his security to win public sympathy - even president or P.M. haven’t such massive security 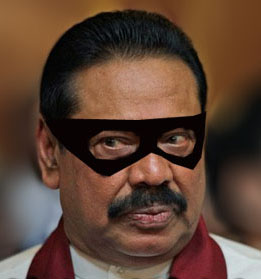 (Lanka-e-News- 26.June.2015, 3.30PM)  While the deposed president Mahinda Rajapakse is griping and grumbling that his security detail is inadequate, prime minister Ranil Wickremesinghe on the other hand revealed  in parliament yesterday (25) the security contingent provided to Mahinda is well in excess of those provided to the incumbent president and the prime minister (P.M.)

The P.M. made this comment in response to the statement made by opposition M.P. Dinesh Gunawardena that the security detail made available to ex president is unsatisfactory.

The P.M. pointed out , a security detail comprising 105 police officers and 104 members of the three forces has been lavished upon the ex president !  In addition ,the P.M. making a special statement  disclosed , the  defeated president who is on pension is provided with the following :
3 motor bicycles of the armed forces
A cab vehicle
3 Land Rovers
3 Double cabs
2 large buses
2 Benz cars
BMW heavy security jeep

Besides , 750 liters of fuel for the BMW jeep , and a further  1200 liters fuel for the two buses are also supplied .

The P.M. explaining further said , an ambulance is also provided to him , and among the special security accoutrements  there are ambulances, bomb disposal devices, explosive device equipments and  claymore mine detectors , and they  are of the most modern kind.

While this huge  security detail with the latest security equipments are provided to the deposed president which massive security even the president or the P.M. of the country do not have  , the security contingent of Kumaran Pathmanathan alias K.P. of the  former LLTE cadre who joined with Rajapakse has also not been curtailed in any way , the P.M. highlighted.

The P.M. questioned while all this massive security detail has been supplied to the defeated president , is it the futile  hope  of the opposition to win over the sympathy of the public by making false allegations that Mahinda Rajapakse’s security had been whittled down?

By T. Jayakumar
Translated by Jeff