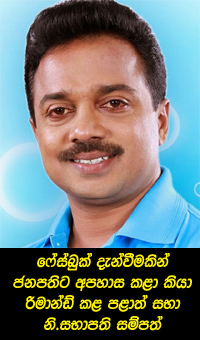 (Lanka-e-News -01.Oct.2015, 11.30PM) Even before 72 hours had elapsed after the Prime minister gave away awards in connection with  media freedom , the Vice chairman of Southern provincial council (PC) , Sampath Athukorale was arrested by the CID and remanded on the orders of the chief magistrate after being produced before court . Athukorale was  charged with vilifying  president Maithripala Sirisena via the face book.

The CID told court that during investigations it has come to light that during the last presidential elections, Athukorale  posted a notice  that was defamatory of the incumbent president who was then the common opposition  presidential candidate via the face book .The mobile phone of the suspect was taken into custody and sent to the University , Colombo for investigation , the CID further revealed to court. The CID also requested court not to enlarge the suspect on bail , since , that could hamper the investigations.

The most strange and rudely shocking part of this melodramatic  law enforcement is  , the suspect had been subjected to all this harassment without a complaint being lodged by the president who is supposed to have been maligned.

The face book is a social media through which personal information can be exchanged with those who communicate after opening  a face book account. That contains private information regarding one another’s personal opinions and these are exchanged freely.

It is an acknowledged fact that nobody in the whole wide world gets ruffled by those opinions and views. There are rules and regulations governing the face book social media to prevent vilification via it. If anybody is vilified , he/she can make a complaint to the face book social media , which will probe whether its rules or regulations have been violated , and such transgressions are then eliminated from it. In the event of any account holder persisting  in  this habit of committing this violation several times deliberately , his account is permanently  cancelled.

When the actual legal position is this , arresting an individual by the CID and remanding him merely on an allegation that the suspect  indulged in such a violation even without the president himself making a complaint , only constitutes demonstrable proof  of  wanton erosion of the right to  freedom of  expression.

It is being doubted whether these are efforts to purposely tarnish the image  of the government of good governance among the people , because nobody of the government has given approbation to these sabotage , stupid and eccentric  moves.

In a country where the police and the Attorney General (AG) allow a  Supreme court judge Sarath Abrew against whom there are complaints after  complaints made by women  of rape charges,  to  mount the sacrosanct judicial  bench and hear cases without let or hindrance  even  without being arrested; and where the same police and AG  say there  are no charges whatsoever against KP the notorious LTTE leader , but deem it right to chase after a people’s representative who is a suspect merely  in a face book social media accusation, and then  to arrest and remand him  just because he made some adverse comments allegedly via the face book , portends grave danger to the whole country , and is to cruelly muffle and gag  the precious  freedom of expression of the people.

It is the consensus such treacherous actions of these scoundrels and saboteurs which run counter to good  governance must be resisted and opposed unconditionally.