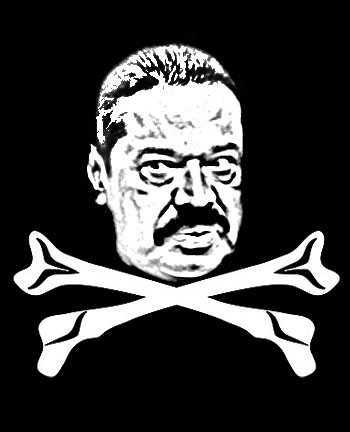 (Lanka-e-News- 23.Oct.2014, 11.55PM) After Basil Rajapakse summoning the electoral organizers of the SLFP to Temple Trees and announcing officially that the Presidential election is in the offing , and Medamulana MaRa is going to contest for the third time , monumental conflicts and controversies have erupted within the SLFP party. Although a huge applause was expected immediately following the announcement , not one SLFP er present cared even to clap hands. The methods and measures to be adopted to win the election was also not discussed by anyone.

In this connection something important happened at the SLFP Polonnaruwa district convention yesterday, that is the resolution adopted at the convention.

On this occasion , the name of Health Minister Maithripala Sirisena, the SLFP gen. secretary was proposed as the next Prime Minister to be appointed prior to the Presidential elections ,by Thamankaduwa local body chairman , and was seconded by another .When the proposer explained that without that appointment , the victory at Presidential elections is impossible , the entire crowd present concurred in it.

Meanwhile at the Kandy district SLFP convention held on the 18 th , because of the stormy situation that prevailed the meeting had to be abruptly terminated. The convention was organized by the chief Minister Sarath Ekanayake , a blindfolded pro MaRa stooge in a tuition classroom. The chief guest on that occasion was DiMu Jayaratne the Prime Minister (PM). The first objection raised by the invitees was the summoning of the PM to a tuition class room, and the criticisms were directly leveled against Ekanayake who was responsible.

The already existing displeasure against the appointment of pro maRa lickspittle Ekanayake as the chief Minister in preference over and above the Prime Minister’s son who polled the highest number of preferential votes exploded when this meeting was held in a tuition classroom where the invitees could hardly breathe. When the crowd present began screaming and shouting immediately after Ekanayake’s speech , the latter vanished from the scene secretly without anybody’s notice. With pandemonium breaking out , the PM began addressing the small crowd that remained.

yesterday (22), when the SLFP Matale district convention was held at Dambulla chaired by Janaka Bandara Tennekoon ,the latter openly lamented that his father was also axed by the party , like how he is being axed now. However , Tennekoon stressed no matter the turmoil he faces and the harm inflicted on him by the party , he will not pole vault to the UNP.

Senior Minister Nawinna who spoke next , said he too faced the same axing and throat cutting . ‘It is being said that my name is also there in the UNP list of those seeking to cross over to the UNP. This is being rumored because I am given a senior Minister post that is utterly worthless. He and Janaka are working jointly,’ he pointed out. Meanwhile deputy Minister Lakshman Vasantha Perera alias ‘Mr. Ethanol’, a lickspittle of MaRa who was present with a group of about ten members , walked out with his group when it was being revealed , Janaka and Nawinna are working together

Whatever said and done MaRa will be the President with overwhelming majority votes. then from February onwards Gotha will start his white van project and many fellows will be gone including many UNP bastards.
-- by achinta on 2014-10-24