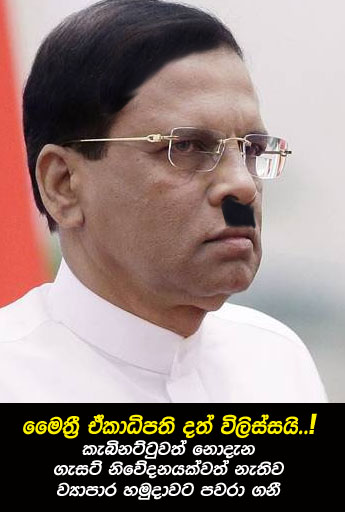 (Lanka-e-News -14.Nov.2015, 11.55PM) The measures taken by president Miathripala Sirisena against Avant Garde Co.has baffled the entire business community. The Navy that went  on board  the ship yesterday (13) of that company with a letter from the defense sceretary is now in the process of collecting the weapons and equipments that were on board the ship. The acquisition of a private business Co. by the forces is a most rigorous exercise. In any case, no written document in this connection has been issued to this Company , nor has there been a gazette notification.

Neither the media nor those responsible are talking about the obnoxious measures taken by the president against Avant Garde Co. because among society now exists a notion, whenever any individual speaks regarding  this  , that individual has collected bribes  from Avant Garde Co.

May we state here , Lanka e news was the first media Institution to expose the transactions of Avant Garde Co. Hence we have no need or necessity to white wash that Co. Neither have we to fear such  notions. On the contrary all what we are trying to explain and elucidate is , if the investigation has not been conducted duly and legally against that Co. , there can be nothing more illegal than the measures taken by the president  purportedly  to make amends , not to mention   the irretrievable damage that can result to the country , owing to the president’s actions.

The following day , on the 11 th , the president summoned a group citing the excuse  that he wished to learn  the facts.That group comprised ministers Wijedasa Rajapakse ,  Champika Ranatunge and  Arjuna Ranatunge , as well as Naval Commander , IGP , Attorney General and the defense secretary . Incredible but true , Arjuna Ranatunge made his appearance without any invitation – in other words he was an intruder.

The president when commencing his speech said , this discussion should be held keeping the media out. This is an internal discussion , the president repeated twice.  Then Rajitha Senaratne and Champika Ranawake began tearing Avant Garde Co. into shreds by pointing out all its faults.But when accusations were levelled  that officers after accepting cash and women from Avant Garde Co. are not implementing the laws ,  the IGP and the AG flew into a rage.

The AG remarked he is also a government officer , but he or anybody else had never accepted  cash or women from anyone. The AG then said , since this matter has come to the surface , he would like to disclose this investigation is not yet over , and from the beginning , Upul Jayasuriya came every fortnight and insisted that Gotabaya be arrested in relation to this case. The AG revealed, he however  told Upul Jayasuriya that such a sudden arrest cannot be made , and a thorough evaluation must be done, whereupon Jaysuriya had said , he has been sent by the Prime Minister (P.M.)

The AG had then explained to him  , if the P.M. wished to inform anything , that he  intimates via P.M.’s  secretary, and that P.M. does  not use Upul Jayasuriya for that.

A few days later , when the AG was at a wedding house , in response to a request made to him to come to Temple Trees and meet the P.M., the AG had gone to meet the P.M. The latter was not alone , and he was with a group of about 50 ministers . The AG related the ministers  at once shouted at him and did not allow him to explain anything. On that same day Champika and Rajitha too similarly treated him. .The AG added , he acts according to the laws , and not according to the wishes or needs of anybody.

The IGP too after the AG’s speech started speaking with fury  . Answering Champika Ranawake he said , ‘we do not work for cash  and women . I do not know whether the Avant Garde owner is dark or fair. I have never met him any day, and never has he any day spoken with him even by phone. Besides , the police has acted in accordance with the laws .

Recently a ship of that Co. was taken into custody on the international territorial waters , and legally no action can be taken therefore , the CID informed , the IGP further stated.

At this juncture , president Maithri inquired from the Navy whether this business can be carried on by it . The Navy Commander and Arjuna Ranatunge the intruder at once replied , the Navy can.  When the  Navy commander however revealed there are agreements  in this regard , the defense secretary let the cat out of the bag and blabbered , four companies have submitted applications to run this business.  The president then said , if it  is possible for the Navy to run this business, to evaluate the existing agrements and intimate to him. The discussions ended on that note.

Nevertheless , even before the participants to this discussion could reach their vehicles, there was an SMS news alert that the president has decided that the Navy takes over the business , and that revelation was made by Rajitha Senaratne .

Intriguingly , the president’s media division did not contradict or correct this anouncement of Rajitha Senaratne , and the very following day , the defense secretary issued a letter that the Navy is taking over Avant Garde Co.

Based on that letter ,from 13 th , the Navy has come on board the ship of the Co. and is in the process of taking over the arms and equipments in it.

Legal foundation and its sovereignty under threat ..

It is to be noted that the president did not convene a cabinet meeting on the 11 th and there were only four cabinet ministers present at the meeting . The Prime minister too was in the dark over this meeting . It was  not even a security council meeting. Other commanders of the forces were also not present .Chiefs of the State intelligence division were also absent.In other words at the meeting on 11 th , some officers, and three  ministers who are very close to the president (Rajitha , Champika and Arjuna)  were only  present.. Of them , two ministers were  like vultures in search of preys ,  making every clandestine  move to take the lucrative business into their hands.

At the conclusion of the meeting , Rajitha told the media something that  was not decided at the meeting. At any rate the president, the following day acted in accordance with only what Rajitha revealed to the media . By this it is very clear the meeting was pre arranged and a camouflage  to carry out the decision taken ,in a different way .

If  the forces of the country is to take over a business about which the cabinet and the prime minister are unaware , and if this can be done this stealthily  and treacherously  , surely in that country the legal system  is not  sovereign .

The emergency regulations is now not in force ,and  neither has the business been taken over under that regulation. At least a Gazette notification should have been made . That too has not been done. If the president has said , he is taking the investigation under his purview  , then it is based on that report , the business should be taken over. Nothing of that sort too had taken place.

Even Mahinda Rajapakse a byword for lawlessness, and who carried on a most lawless administration , when he took over the Sevanagala sugar Co. business of Daya Gamage then , which had a turnover of Rs. 350 million per day , only after giving it over to the state entrepreneurship  private division , and thereafter exploiting the laws   that permit to acquire a business if it is  not duly conducted , that business was acquired. At least Mahinda Rajapakse took refuge under some  law which he took unfair advantage of . Whereas  in this instance , in relation  to  Maithripala Sirisena , he has given over a business to the Navy without any law whatsoever to back or support his action . Certainly this is a most dangerous state of affairs , and augurs ill for the country and the people.

There is also a  most lethal and deadly side for this crooked machination   : when Avant Garde tried to convene a media briefing and sought to explain their side of the story yesterday , the president had spoken and threatened them -warning them not to hold the media briefing. Accordingly they have cancelled the briefing. Can this  dangerous trend and the treacherous actions be called by any other term than  dictatorship ?  or is this what good governance means in the Thesaurus of the president ?

What is the guarantee the business community has in this lawless climate that , in the same way , Maliban Biscuit Co. or any other will not be acquired  and handed over to the forces?  By publicising through the media there is toxin or poison in the biscuits of Maliban , and with the three ministers , Rajitha , Champika and Arjuna to nod and say yes ; the next step is , after mounting  charges against  those who speak for Maliban Co. as taking bribes from Maliban owners , and after inquiring from the forces whether they  can run it, take over the business.

So,when the army commander says he can , isn’t it possible   to similarly acquire Maliban Co. too after the defense secretary issues a letter to that effect. Can anybody have faith that such  a taking over is impossible? When it is not even known that a media briefing is being convened in this regard , to which God can  these victims complain?

Of course currently, by announcing  there is Democracy and  sovereignty of law  , foreign investors are being waved at and welcomed. Yet , if Lankan businesses are being given over  to the forces disregarding laws, in a dictatorial manner , not even following the Kangaroo courts, who is the investor who will arrive in SL? Under these circumstances , if an investor is still to come  for investment in SL , he must be unhinged.

Therefore what prevails now in SL is a most perilous situation threatening the entire legal foundation. If Avant Garde is a wrongdoer , an investigation shall be conducted and the Co. proved guilty. Those who viewed the acquisition of Daya Gamage’s Sugar Co .then as  wrongful , would view the present acquisition as still worse. If anybody is unable to see this mistake , it is only the one who is adding fuel to the fire with those who are taking the president up the garden path, and  deluding all via  lip service to good governance , to the detriment of the country and the nation.

If the president is going to follow the advice of self seeking selfish ministers who caused billions of rupees loss to the country owing to their  actions  which led to an embargo being  imposed on  exports to European countries , doom and gloom looming over this country is inevitable.

By a special reporter of LeN
Translated by Jeff

First we had "Dutugemunu" from the deep south who defeated the "Elares"from the North and now we have "Parakramabahu" from the NCP. Not bad for Sri Lanka's modern history. We can only hope that Sri Lanka can become self-sufficient in rice-production (pin bath) very soon.
-- by Mrs. Kamaldeen on 2015-11-19