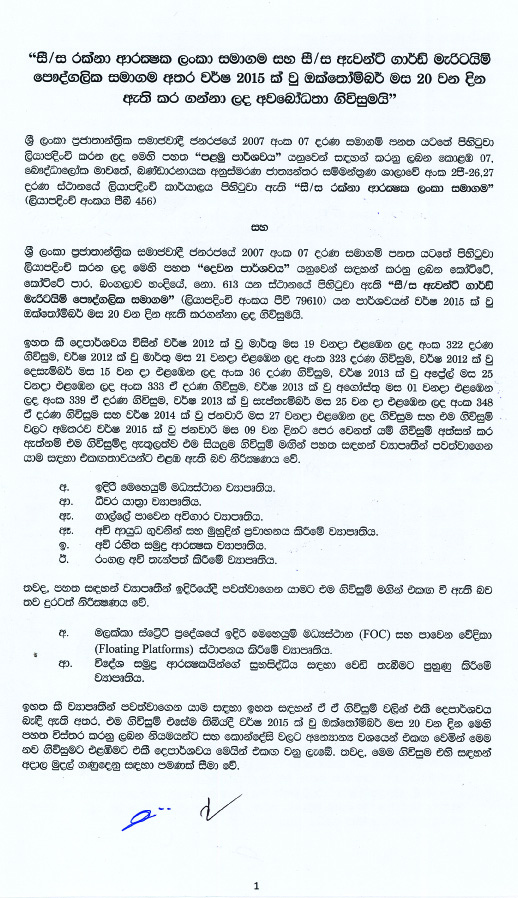 (Lanka-e-News -18.Nov.2015, 9.00PM) Following Lanka e news exposing the controversial acquisition by the Navy of the Avant Garde Co. a private Institution , and expressing its opposition to it ,the health minister Rajitha Senaratne spoke to Lanka e news in this regard. Hereunder is the conversation we had with us :

Rajitha:  Hello. All the social websites that worked for the victory on 8  th are berating you.

LeN : True Doctor? On what grounds are they scolding us?

Rajitha: They are criticising you that you are stooping to do the sordid biddings of Avant Garde Co.

Rajitha: Okay , what is your issue in connection with this ?

LeN: Nothing is an issue to us. Even if Aavnt Garde is struck by lightning, that does not matter. The issue that concerns us , is the acquisition by the Navy of a private Co. without abiding by any laws.

Rajitha: It is Gota who gave it to Avant Garde. A house Gota could not sell in America  was bought by Nissanka Senadhipathy after making a huge payment. As a reciprocal gesture Gota made this business and gave it to him.

LeN: Hold on  Doctor, it was LeN that first published this story.We revealed this as far back as three years ago. Anyway now that is of no use. Now the question at issue is ,a Company being illegally given over to the forces.

Rajitha: If there is a problem to the national security , the president can give a company over to the forces.

LeN: Now , who told that there is an issue to the national security from this Co.?

Rajitha: At that time even I told the president . Deputy solicitor general Suhada Gamlath also told this.

LeN: Suhada Gamlath surely is not the attorney General. Besides you are a minister only , and not president’s security advisor. If there is problem to the national security , it is through the security council that should be addressed. The national intelligence  service should have reported such a thing. Moreover it was not the security council that met on that day. Neither was it  a cabinet meeting.. It was only the  president and a few of you  close to him who met . Under such circumstances , how can you take such a decision?

Rajitha: The president can take decisions any time regarding national security .

LeN: Doctor this is how you made Mahinda Rajapakse also a dictator. No matter what devil dance you want to perform , surely the laws of the country cannot be trampled .At least a gazette notification must be there . Moreover, how can an Institution that signed an ageement with the government 20 days ago suddenly become a threat to national security ?

It is on this note the discussion ended. No president says I am going to be a dictator. They always say, this is being done for national security , or this is being done to safeguard religion. These are their deceitful utterances. President Maithri is one who says one thing and does the very opposite. Within the last ten months alone he had proved this on many occasions.

‘I am not coming to amend the executive presidency , but to abolish it’ were the categorical assurances of double tongued Maithri .Subsequently when the 19 th amendment was brought forward , ‘ the executive powers in the presidency will be curtailed’ , he said. LeN at that juncture did not deter to expose Mathri’s double dealing policies.

At that moment Rajitha and Champika were with Maithri playing the double game tournament .

Thereafter, without dissolving the parliament in 100 days , delayed this dissolution until the Rajapakses became strong , even blocking the passage of the financial bill in parliament. During that period Rajitha and Champika were not on the side of the people , but rather with Maithri’s stealthy and sordid activities while blabbering about the election system.

The urgency they had to change the elections system then , they do not have now. This taking over the private establishment by  the forces is president Maithripala’s most reprehensible dictatorial action . Rajitha and Champika were  aiding and abetting him. This is not for any other reason , but to take control of this lucrative business themselves.

LeN is in possesion of evidence that testifies to president’s mendacity. That is , an agreement was signed on 20 th October ( 20 days ago)  between Avant Garde Co . supposed to be a threat to national security and Rakna Lanka Co. which is completely under the defense ministry of Maithripala Sirisena. Regarding Rakna Lanka Co. the website reveals thus :

'' Rakna Arakshaka Lanka Limited (RALL) is a Sri Lanka Government owned business undertaking in collaboration with the Ministry of Defence...''

Accordingly , the president as defense minister  is absolutely bound with this agreement. Mind you ,by that time Avant Garde Co. was in the midst of a storm of controversy.

In that backdrop  how could such an agreement be signed? Why was this agreement torn asunder , and the company was given  over to the forces?

Is there any more evidence needed to prove that there is no law in the country , whereby Rajithas , Champikas and Sirisenas are exploiting the situation to make crocodiles into other reptiles and vice versa. We warn the nation that  this kind of illegal and nefarious actions will not stop at this , when wolves and hyenas have got together.

In the photographs herein are the agreements signed between Maithri’s Rakna Lanka Co. and Avant Garde Co .20 days ago. Readers can magnify and read them 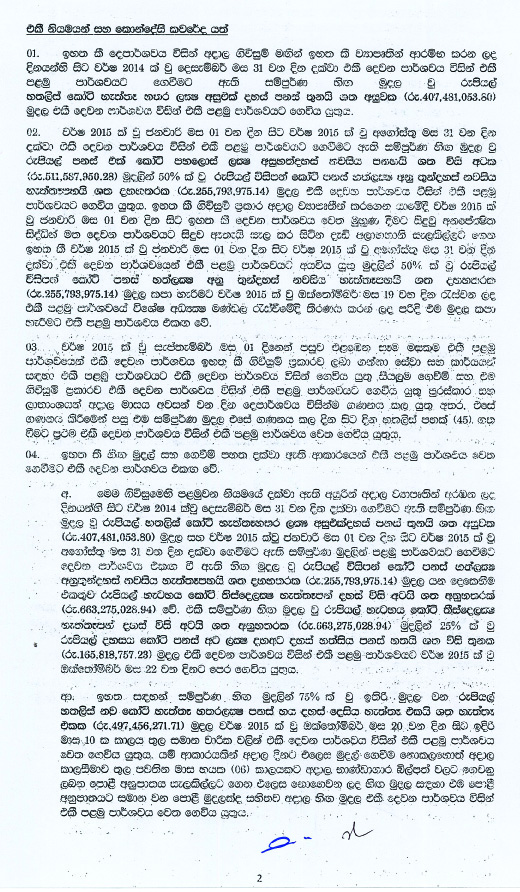 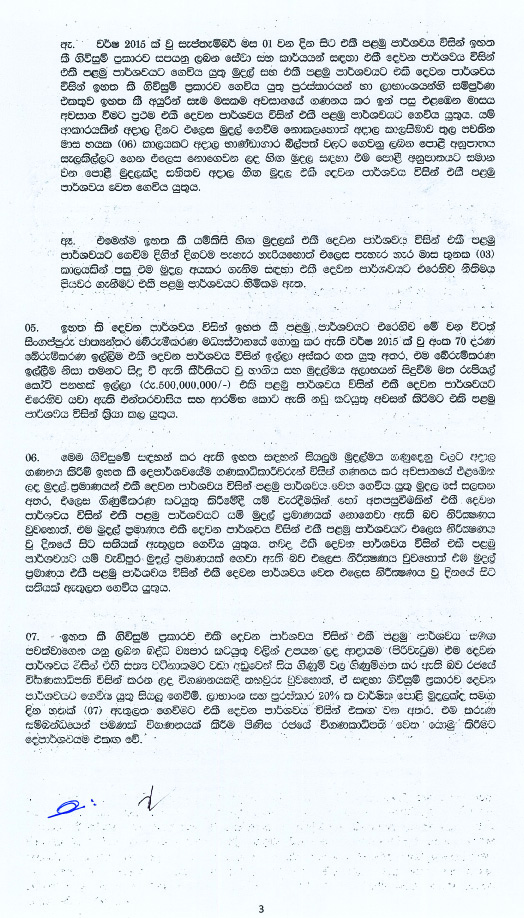 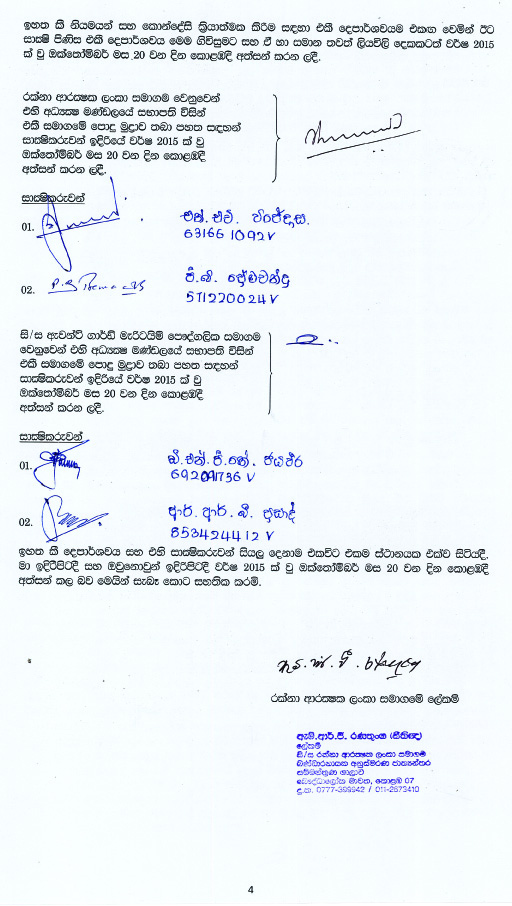