Are Maithri laws only for the UNP members ? 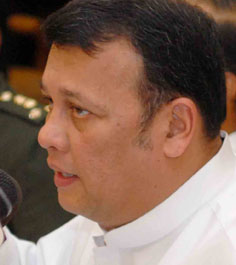 (Lanka-e-News - 20.Nov.2015, 4.35 AM) Retired major general Gamini Hettiarachchi who was in charge of secret operations room on 8 th January - the day of the presidential elections, that was run by Gotabaya Rajapakse on the instructions of ex president Mahinda Rajapakse with a view to preclude good governance from  coming into being in Sri Lanka, was appointed as the  chairman of the vocational training Authority by the same  government of good governance . In addition ,Sugath Handunge who wrote the lyrics of ‘Aayu Rakbatthhu Aavada’ on behalf of ex president Mahinda Rajapakse as the Institute’s  Vice chairman , and  former Puttalam deputy minister 71 years old Yusas Peiris as chairman of ‘NAITA,’ were appointed ,minister Mahinda Samarasinghe revealed.

It is worthy of note that Hettiarachchi has no qualification whatsoever to match  this appointment , as his knowledge pertains to   military affairs. If he has any qualification at all , it is simply that he  was the Director General  of the headquarters of Human rights and disaster management when Samarasinghe was its minister.

The clandestine operations room   that was controlled by Gotabaya was geared to sabotage the presidential election 2015 , and to subsequently meet any challenges that may develop thereby. 200 exclusive senior ex officers of the security division like retired Navy commander Daya Sandagiri and major General Soysa were manning this service for over two months.

The expenditure involved in  this special operation comprising members of the forces was fully met by Avant Garde Co. The monthly salaries paid were very high to all  these ex officers of the forces

Consequent upon the appointment of these officers to posts of chairman and deputy chairman of the Vocational training authority  by minister  Samarasinghe without selections being duly made based on the recommendations of the ‘president –P.M. ‘ special Committee has caused deep disappointment and disillusionment among the groups that made supreme sacrifices and even risked their lives to install a government of good governance.

The government of good governance came to power by making all the promises and solemn assurances that the corrupt will be punished and severely dealt with.However ,following the victory , appointment of the corrupt and the crooked individuals who acted unlawfully to install Mahinda Rajapakse in power, to key positions now in the government Institutions has naturally rudely shocked and provoked the anger of  UNP rank and file who are now thoroughly disappointed.The UNP activists of the good governance government are fiercely and justifiably questioning whether the president’s directive is applicable only to the UNP when appointing individuals to high positions in the State Institutions?

On top of this unwelcome   chairman post appointment , Sugath Handunge who wrote the lyics of ‘Ayu Rakkaththu Aavada’ for Mahinda Rajapakse has also been appointed as the new Vice chairman of Vocational training Authority .

Mahinda Ileperuma who wrote the biography  of Mahinda Rajapakse - the book titled ‘Kuragan Satakaya,’ the media Director of his  , and is a close friend of Sugath Handunge  had recommended the latter to  minister Samarasinghe.

Believe it or not , Handunge was earlier working in the Coconut development board , and was demoted by minister Jagath Pushpakumara .

What’s more ! while there exists a law that those appointed to posts of chairman of government Institutions should be below the age of 70 years, minister Samarasinghe has ignored the law , to appoint Puttalam district ex deputy minister Yusas Peiris as the chairman of National apprentice Industrial  training authority .Yusas who was born on 8 th March 1944 is now over 71 years of age.

These politicians are good only during election period because the public are fools and out of their nut during this period.
-- by Charles on 2015-11-24