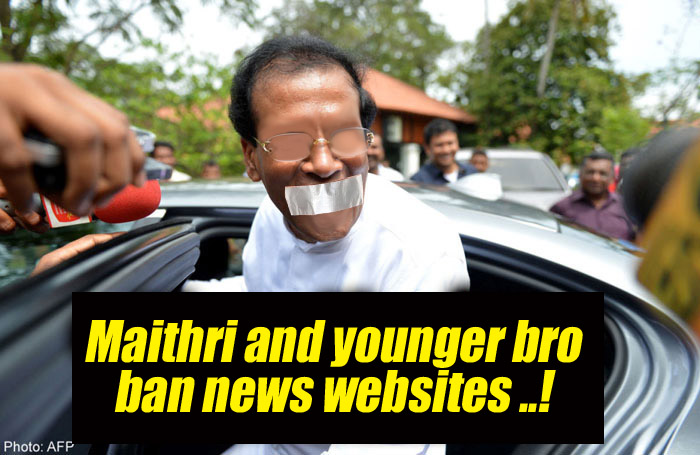 (Lanka-e-News -23.Nov.2015, 11.30PM) It is an unequivocal fact that the erstwhile corrupt Rajapakse regime banned the websites which exposed their robberies , perfidies and villainies. Now when the right to information bill is to be tabled in parliament shortly by the government of good governance (installed in power by the rainbow revolution) ,  after lifting the bans , and when seeking  to restore Democracy in the country, strangely , Maithripala Sirisena who was most viciously vociferous against the corrupt and criminal  Rajapakse regime, has within just ten months forgotten all his promises and undertakings he gave to the people of the country.

Maithripala along with his younger brother who is demanding a most unreasonable monthly salary of Rs. Ten million from SLT Mobitel Co., have  introduced a ban on Lanka e news website and another  within their Institutions.

It was only recently  Lanka e news exposed  the illegal action of handing  over  of the ownership of a private Co. to the Navy by Maithripala Sirisena , and his high handed action taking the law into the hands ., Maithripala despite  announcing loudly and proudly that he would not stifle the media , however   as the defense minister had acted brazenly against his pronouncements and announcements by banning  access to the Lanka e  news website  within the Navy which comes under his purview. He has taken this step simply because the news website conveyed the true picture pertaining to the controversial Avant Garde Co. openly.

Naval crew have complained to us that not only Lanka e news , but even ‘Gossip Lanka’ and Hiru Gossip’ had been banned from access .What is most reprehensible and irksome   about this ban is , even when Mahinda Rajapakse a byword for lawlessness  banned the websites  Island wide , within the Navy accessing the website was not disallowed . Hence it is most crucial question today , who pushed the Navy to this lowliest level ?

Maithripala’s younger brother who is demanding Rs. Ten million as salary per month is also struck by Maithri’s contagion . He has also banned the Lanka e news website within his  SLT. He had deprived the 8000 employees in the Institution of the right to access Lanka e news website. Kumarasinghe Sirisena has himself directly instructed SLT chief IT officer  Rohana Wijeweera another notorious racketeer to implement this ban.

The public must know who this Rohana Wijeweera is...

The SLT for its  customer relation management got down a computer ‘Customer Relation Management program.’

Now plans are afoot to get down another ‘program.’ Believe it or not , this program has also been entrusted to the same culprit , Wijeweera who was the sole cause of the Rs. 1000 million loss. In addition this Wijeweera the inefficient incompetent scoundrel has been given an extension in service , even after reaching 55 years, by none other than Maithri’s younger  brother Kumarasinghe Sirisena.

It is an acknowledged fact that it is only an employee who can plough  in profit for the establishment , and not the one engendering loss to it who should be given an extension. Maithri’s younger brother is one who is  unconcerned about those losses to the government Institution and the country . His only obsession is  lining his own extraordinarily large  pocket . Hence Wijeweera who nods at everything Kumarasinghe requests has been given extension.

No matter what , the news website bans imposed on these two Institutions are a foretaste of what are to come . Maithri and his crooked brother have sampled what despotic trends are in store for the people who elected Maithripala with the hope of  restoring  and reinforcing  Democracy. In the not too distant future extending this ban Island wide is not a matter for surprise , because these two nitwits  don’t seem to have the grey matter to learn a lesson – from the fate that befell the Rajapakses who met their Waterloo by trying these same  scheming tricks and despotic treacheries.

A letter sent by the crew of the SL navy pertaining to the ban imposed by Maithri on the websites is appended .

The right to information and the SL Navy

A majority of the SL  Navy officers and the crew use the Navy internal website to access the internet , but during the last two weeks access to the Lanka e news ,Gossip Lanka and Hiru Gossip websites have been obstructed.

During the era of Mahinda Rajapakse , even when the Telecom Mobitel Dialog ,the providers of internet service to Lanka e news website was denied access  ,the Navy internal website that was used by lankaenews.com was not obstructed from being accessed  .During that time it was Lanka com that supplied the internet service to the SL Navy.

Yet a group of buffoons now who know nothing except tomfoolery of the Navy Technical division , and absolutely ignorant of what is right to information and expression have taken this decision and imposed the ban. No grounds had been cited to support this decision except that decision was based on an order from the top.

While the government of good governance has allowed the access of these websites which were banned by the Mahinda Rajapakse administration, this (mis)conduct  on the part of a few is an index they are still buffaloes and only can grunt – the only thing they can do well. .