The ‘digital TV gold mine’ created by Rajapakses to earn billions secretly and selfishly destroyed by P.M. Ranil..! 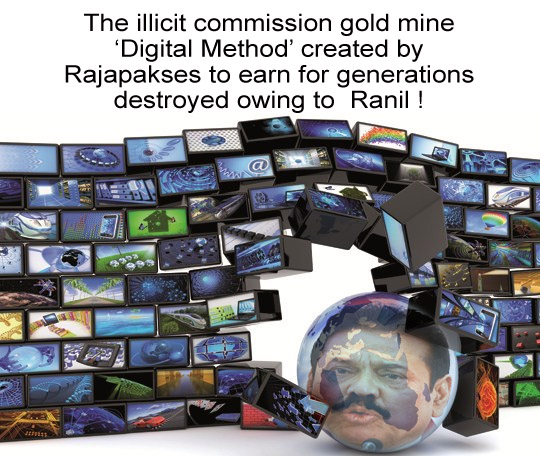 (Lanka-e-News -09.Dec.2015, 11.30PM) A massive  corruption oriented  effort to make all television users in Sri Lanka (SL) to pay commissions to the Rajapakses not only today but everyday even  in the future which would have precipitated a catastrophe in the country , had been forestalled and  the nation had been saved owing to the patriotic fervor and intelligent thinking of the new prime minister.   Even through spurious  development programs illicit commission collections have been targeted by Machiavellian Mahinda Rajapakse.

This colossal corruption involves  the potential conversion of the television Industry into digital system via an agreement between the lawless Rajapakses who are by now a byword for corrupton and Japan . However this has been now halted . The background to this racket is as follows :

It is true  telecasting is being made digital worldwide and there  is a telecasting system which is accepted by the majority globally. That system is the DVBT 2 system.However Japan has introduced  other systems. That is , ISDBT system.This is similar to the NTSC system introduced to the world for video technology parallel to the PAL system used worldwide in the past. Those Sri Lankans who used an  NTSC video recorder then met with  disastrous problems later on. It was the casette recorder in line with PAL system that was produced world wide then , while the NTSC system fell into disuse.

The telecasting system is as follows :

While the world was using the DVBT2 system , Japan discovered the ISDBT system . In SL , the Medamulana Rajapakse morons who know not the world except through illicit commissions collected worldwide,  when trying to introduce the ISDBT  telecasting digital system here have signed an agreement with Japan involving US dollars 108 million.That is , when Japan is intoducing the digital system as per the agreement , Japan will be providing us with a Highway from Peliyagoda to Kollupitiya, but that  is not provided  free ,for Japan has to be paid for this later as a loan. In othe words , it was a subterfuge  to collect illicit commissions while pulling the wool over the nation.

The most treacherous and rudely shocking part of this camouflage is , nowehere else in the world the ISDBT system is used. That means a television used in any other country cannot be used in SL . Only televisions of Japan according to the ISDBT system can be used  here.

Believe it or not , despite these glaring unwelcome data and facts ,  the Rajapakses whose gaze are  fixed only on earning selfishly and on illicit commissions regardless of national interests have signed the agreement with Japan nevertheless. This agreement is to remit  commissions to   the company that is brought into being by the Rajapakses when any  individual brings a television set into SL.

The new P.M. Ranil Wickremesinghe acting in the best interests of the nation had told Japan that this agreement has to be reviewed.

Accordingly , a technology committee has been formed  constituted of all telecasting companies and other scientists to study the ISDBT system of Japan , and the DVBT 2 system adopted by other countries with P.M.’s instructions to furnish a report on their findings. Japan and other countries enlightened the committee on their systems .Finally , the technological committee has decided it is the DVBT 2 system used globally that is most suitable for SL.

In any case , based on reports reaching Lanka e news inside information division , the Machiavellian Rajapakses skilled in perfidies and collecting commissions most craftily  have already collected their commissions at the time of signing the agreement with Japan. Therefore Japan to make up for its loss has desperately sought various avenues via payment of bribes to various individuals in order to plant its system in SL , but without avail.

Thanks for the rainbow revolution of 8th January, but for which the country would have been driven into the vortex of another economic curse , now buried  because of the probity of the  new P.M.

What is this big ha-ho? Let Mr. Rajapasse, Mrs. Ranammandi and their huge extended families watch ISBT TV unhindered through the Internet while all other law-abiding Sri Lankans watch DVBT2 TV. Problem ended.
-- by Ernest Koch on 2015-12-10

Let there be no ISDBT nor DVBT 2. The world is rapid going over to Satellete and IPTV Let us allocate the 600 MHz bandwidth to 4G and 5G and go over to watching TV on Smart TVs via IP. This is what is happening in the world.
-- by MettavihariLet on 2015-12-14