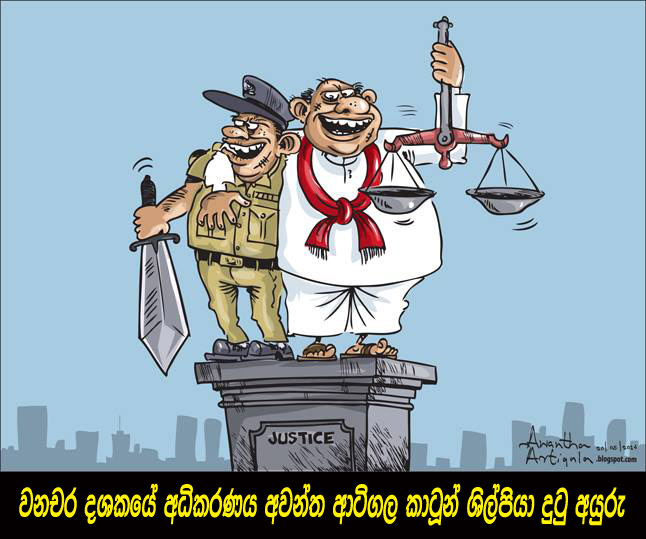 At the election held on the 16 th , High court judges Manilal Waidyatileke contested the post of president and  Bandula Karunaratne , both representing the pro MaRa group contested the post of chief whip, while  high court judge Piyasena Ranasinghe representing  the progressive group contested the post of president . It was he  who opposed the unlawful dismissal of ex chief justice Shiranee Bandaranaike during the period of  impeachment  tabled  by the lawless Rajapakses , Finally , Manilal Widyaratne of the MaRa group could only poll 12 votes whereas Piyasena Ranasinghe representing the progressive group polled as many as 32 votes to defeat his closest rival Manilal most convincingly ( the total number of votes is 45 to 50).

It was the perverse  aim and ambition of Manilal and Bandula of the pro MaRa group to take control of the High court judges association , and thereby exert their undue pressures on the Judicial Service Commission (JSC), which however did not materialize .

A majority of the cases pertaining to the colossal frauds and corruption that raged during the nefarious decade of the lawless, corrupt and criminal Rajapakses are being heard in Colombo. Currently 7 of the 9 cases that are being heard in the high courts are before pro MaRa judges . This is mainly  because of the outrageous and calculated  politicization of the judiciary  during MaRa’s tenure of office.

These judges are hearing cases in Colombo without being transferred in order to  tilt the balance in favor of Machiavellian MaRa  best noted as a worst practitioner of all the cardinal sins on earth.  Hence if these judges who have been in Colombo for a long time  are to continue still in their places , the JSC can pressurize against that. That was why  the pro MaRa groups moved heaven and earth to take control of the High court judges association .

This bugger Parakrama Bandhula Karunaratne is a dirty judge. When he was presiding in Kandy as the High Court Judge he took bribes and discharged the accused who ran over little kids on pedestrian crossing. This dirty fella is licking and kissing the asses of every CJ exept Madam Bandaranayake. Now and then boasting that he is the youngest magistrate ever entered to the judiciary now going behind DEAL DASA Rajapaksha to get a quick promotin to Court Of Appeal. And this dirty person is harressing Apprenticing lady lawyers who come to court for to learn court proceedings. This bugger should be chased at once from the judiciary.
-- by bandhu on 2016-07-20

This person Parakrama Bandhula DeSoyza Karunaratnne is now having an adulterous affair with stenographer named Irangani Kumudini. This is a famous secret around Hulftsdorp, that her second child's father is Bandhula Karunaratne, This woman has two children, the youngest had met with an accident while she was travelling to sunday daham pasela with her so called legal husband, both got injured the legal husband of this stenographer was treated in National Hospital, while Bandhula Karunaratne had treated his bastard daughter in Nawaloka Hospital. The date is 08.05.2016 sunday, complaint made to welikada police 1674.GCR page 239. Anyone can check. This person is a typical Wasala Balla
-- by Chamath Morayas on 2016-07-20