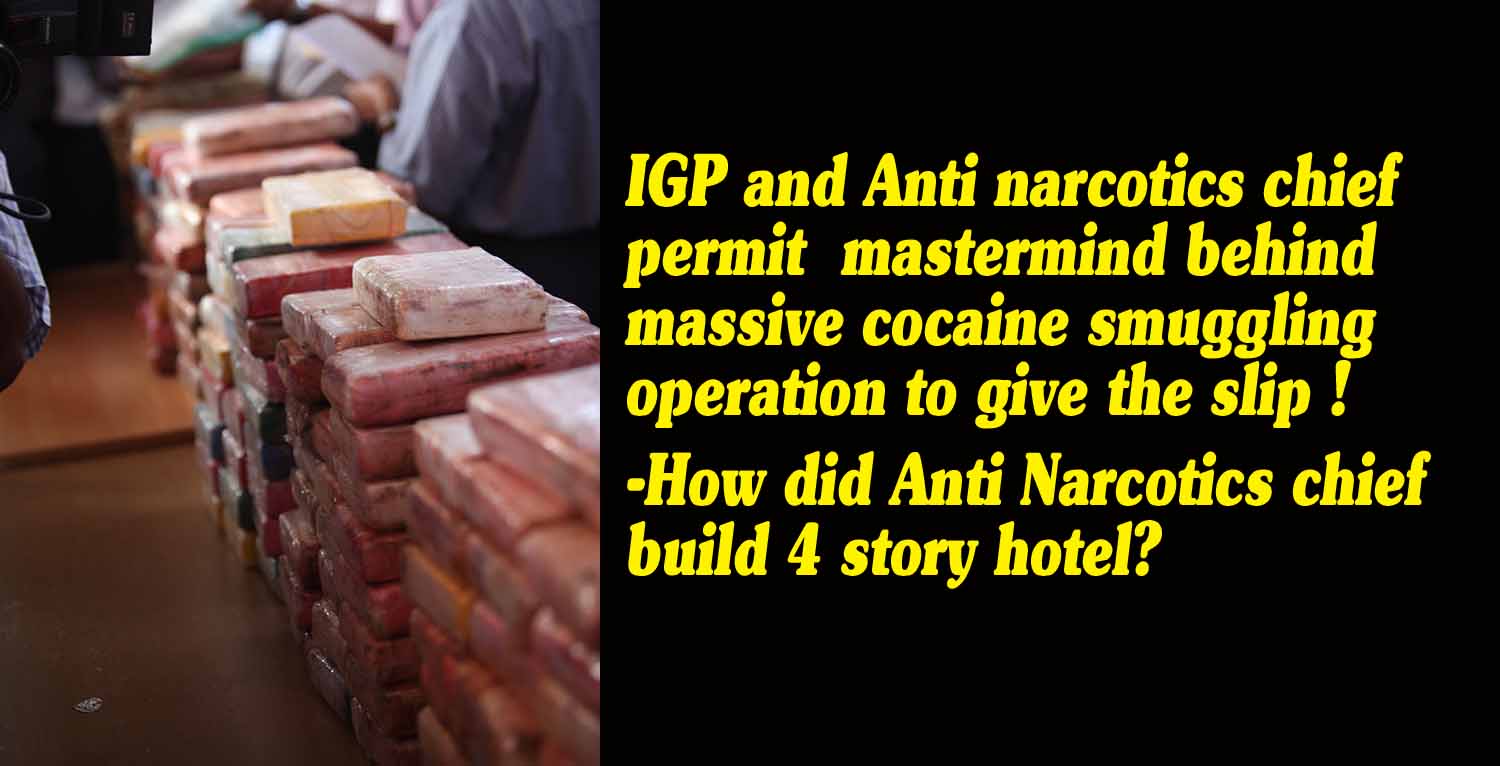 (Lanka-e-News - 14.March.2017, 2.10AM)   Believe it or not !  During the period between 22 nd July and  24   th   November 2016,  massive  quantities of cocaine valued at many millions of rupees were smuggled into Sri Lanka on three occasions along with sugar imports from Brazil  . But what ‘s even more  incredible than all that is , the mastermind behind this massive illicit operation has been allowed to give the slip based on a plan of  the IGP Poojitha Jayasundara and DIG Kamal Silva in charge of the anti Narcotics division , whereby the suspect has escaped arrest , based on reports reaching Lanka e news inside information division.

Between  14 th June and 9 th December 2016 , huge quantities of cocaine were seized in SL on five occasions.

The Anti narcotics division has made three detections while the police STF has made one .

When the  honest officers of the anti narcotics division were duly conducting investigations  in  respect of the three detections made by them their  suspicions were primarily   triggered based on  several issues  : While the first detection was made on 22 nd July , why were  cocaine along with sugar smuggled in until 24 th November?  Though there isn’t much market for  cocaine in SL ,then  why were such large quantities of that contraband dispatched  to SL ?   The clear reasonable inference  is,  there were  individuals in SL earnestly anticipating this huge  illicit cargo .

While the investigations were under way , based on a phone call , the eagle eyed   police officers have turned their attention towards a particular  individual. He is a Muslim businessman from Dehiwala who is related to a high rung police officer, and finally it is  IGP Poojith Jayasundara and Anti Narcotics division chief Kamal Silva who have  arranged for the escape of the suspect from the arms of the law .

Fortunately , Lanka e news is in  possession of   copious information in this connection , and we are in the process of sifting and sorting the information to ascertain the facts ,and getting them confirmed again. Therefore if anybody tries to suppress the truth, that will be to his/her  disadvantage because we shall not hesitate to expose every detail including name and address of such rascals irrespective of their status and ranks , because that exposure is in the best interests of the police force and the country

Kamal and Poojitha are officers who were  having underhand dealings with heroin barons for a long time.  Poojitha was an officer who at the behest of heroin peddlers arranged for the murder of IP Douglas Nimal , an officer under him , and his wife. ( details of these crimes shall be revealed via a subsequent report)

In any case , one piece of information pertaining to the  links Kamal Silva has with the heroin dealers shall be revealed for the moment …

Can a police officer build a four story building out of his legitimate income ?

Kamal Silva inaugurated a four storey hotel at Elakande on the sly on the 11 th.  Lawyer Ajith Rohana a police media spokesman better known as ‘Peththappuwa’ alone secretly attended this event.  The perplexing and pertinent question is , how could Kamal Silva receiving  a  monthly salary from the government could construct such a massive hotel ?  The supervisor of this Hotel which was constructed on illicit  earnings collected from heroin dealers is also another officer of the Anti Narcotics division. He is SI Mahinda ,a shameless low bred stooge of Kamal Silva. The latter has purchased a  land in the vicinity of the hotel and built a house for  Mahinda to look after the affairs of Kamal Silva’s hotel.

While Kamal Silva was the director of the Anti Narcotics division , he was promoted as DIG. According to a circular of the police department , the officer , after he is promoted shall be transferred to another division. That rule however was not applied to Kamal Silva because of Poojitha Jayasundara for obvious reasons-   because of the colossal filthy lucre that were being collected from the heroin magnates  under the counter.

Poojitha too  was a DIG in charge of the Anti Narcotics Bureau some time ago. At that time he openly declared Kamal Silva was corrupt , and should be evicted from his post. Strangely , after Poojitha became the IGP , both of them who knew the  taste of filthy lucre got pasted together like bread and butter . The old accusations therefore  evaporated  into thin air.

It is a pity , the minister in charge of the police is in the dark about these ‘police sellamas’ (police tricks and treacheries). It is well known the minster  Is preoccupied with other ‘sellams’ (other games) .The secretary of the ministry is well noted as an individual  who is only accustomed to remaining deaf and blind while on duty even in the full glare of corruption. He is  such a ‘meek Ass ’  that  when he was the Director of Customs , he  allowed a container to be released sans inspection simply because Namal Rajapakse the notorious crook gave him a telephone call.

Such an officer performing duties as  the  ministry secretary coupled with  the inability to search  for the Police Commission even by the god of light foretellers had created the best environment most conducive to Poojitha and Kamal , the two unscrupulous police officers well entrenched  and well seasoned in infinite   corruption not only to have their say but even their way without any hindrance when  engaging in their long term rackets to the detriment of the Police force and the country as a whole.

Though these two uniformed villains  got together and let go the mastermind  behind    this colossal  cocaine smuggling operation via sugar containers, might we warn  , this mastermind escaping from the Eagle eyes  of our inside information division is not easy. Even the high ranking  police officer who is a relative of the mastermind is under our surveillance. The dual citizen who did the re export of cocaine too is being watched by us. We shall in the future expose all the sordid details to the masses.

By Lanka e news inside information service division  Board Reporter