Gamarala gone mad ! ‘If I am to go I shall set fire to everything before that’ president screams in a fit of rage and insanity..! 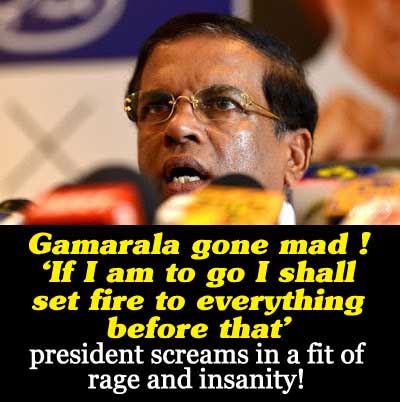 (Lanka-e-News - 06.April.2018, 11.30PM)  President Pallewatte Gamarala  who is presently  in  a frenzy following his humiliating defeats behaved like a lunatic who had  just  escaped from the mental asylum during  a discussion with the participation of the prime minister and some senior ministers today . Flying into a rage  he said  ,’ if I am to go I shall set fire to everything before that’ and hit the table with his fists.

When a number of senior ministers of the UNF including the P.M. , Mangala, Malik, Kabir and  Akila met with the president Pallewatte Gamarala this noon to tell him that the UNF cannot any  longer go on with the serpents (SLFP ministers),  specially  with the six ministers in the cabinet who voted against the P.M. and the government during the no confidence motion , and that they should be replaced , the president has flown into a mad  fit of rage like a lunatic in an insanity fit.

The president who  bitterly resisted making changes to the cabinet had  said this cabinet should go on until 2020.  Gamarala had therefore strongly rejected the suggestions. Then in a state of sudden and grave provocation like a lunatic hit the table and screamed’ if I am to go I shall only do that after setting fire to everything’ . The P.M. and his team were shocked by the insane conduct of this foolish hanuman  unbecoming to  a president of the country. Gamarala who was truly in a  fit  of insanity had finally asked for time,  and promised to give an answer   after discussing with the SLFP working committee.