Can you beat that ? Only TV training Institute of SL to be sacrificed to give way for Chathurika’s TV channel ! 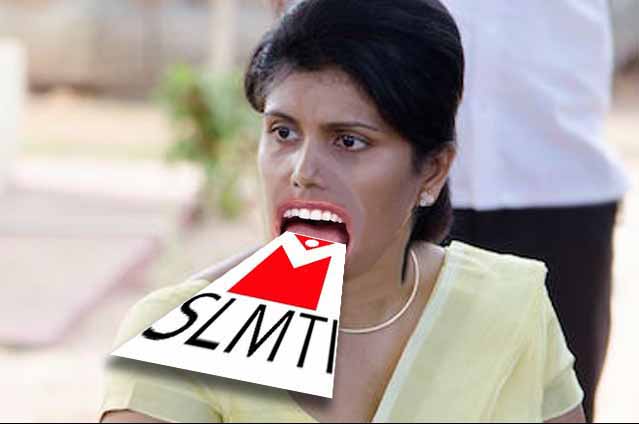 (Lanka-e-News- 01.June.2018, 11.00PM)  President Pallewatte Gamarala Sirisena’s  latest brutal conspiracy is to transfer a most valuable asset which belonged to the nation since 1982 , to his daughter Chathurika Sirisena according to reports reaching Lanka e News.

This training Institute which was hitherto under the mass media ministry , following the last cabinet reshuffle when changing the subjects coming under the various ministries via the gazette notification , president Gamarala brought the Institute under the purview of the presidential secretariat on the sly in order to accomplish  his conspiratorial aim.

To be sold to either to a Korean or Dubai businessman…

It is a well known fact Pallewatte Gamarala a shameless liar wouldn’t have  even in his dreams become  a president but for  fortuitous circumstances . Now after his becoming the president , his daughter and son in law fattened on death and despair so much so that they  haven’t only  a television channel   now.Even the children of deposed and despised corrupt  Mahinda Rajapakse had this crazy mania and launched a TV channel, and now Gamarala’s daughter and son in law are also  afflicted with the same madness.

What Chathurika  and son in law of Gamarala are trying to do is ,  sell the mass media training Institute to a foreign Co. and commence their  television channel in lieu. By now Gamarala’s daughter and son in law have completed  the necessary groundwork  towards that . They are most busy these days  to implement  their plans  this week or by next week.

Late J R Jayawardena a visionary  leader , when introducing the  television network  into SL with Japanese aid , he obtained aid from Germany to train media and technology  personnel  too. That training Institute was the Sri Lanka Television training Institute   (SLTTI)

By that time Germany had established a Foundation Institute in SL through the Federick Ebert foundation to train leaders. Therefore in order to make the tasks of the TV training Institute  easy , the latter was  brought under the administration of the Foundation , and operated within the same premises, which premises belongs to the government .

The TTI which was under the administration of  prominent visual media experts like Vasantha Obeysekera and Tissa Abeysekera was  finally under late Dharmasena Pathiraja  who named it SL mass media training Institute after broad basing its activities. Though Chaturika and president’s son in law were eyeing this Institute during the Pathiraja period ,  but owing to Pathiraja’s influence , they could n’t accomplish  their selfish self seeking foul agenda.

Following the demise of Pathriaja , the Institute’s administration  was entrusted to the care of visual media  celebrity Vimukthi Jayasundara , the only Sri Lankan who is  an international award winner and educated in an International Institute . But before anything further could be done  , Gamarala’s thieving family including daughter and son in law have made all the arrangements to deal a ‘deadly blow’ to this Institute too.

If one has to secure a degree in  mass media one must enter a University in SL. Yet it is a matter for rude shock , some of those who come out as mass media graduates do not know where the Art Gallery is.

In this backdrop   , the  Mass media Institute is the only one which awards a world recognized  diploma in visual media to those who haven’t a University level qualification. A holder of this diploma can enter any recognized University in the world and secure a degree on that subject.

The annual fee  for the Diploma course is Rs. 50, 000.00 only  which is most reasonable and can be afforded by anyone. There are about 700 students following the course. There are also over 4000 students who followed their studies in this Institute , and are now employed at various media Institutions.

One and only Institute in SL – Gamarala family to devour that too !

There is a surplus of television channels in SL , but only one training Institute , and that is the Mass media training Institute. It is such a valuable  precious  Institute that is going to be sacrificed and destroyed by the daughter and son in law of Gamarala for their selfish self centered gains.

At a time when this one and only Institution in SL  is under threat of the conspiracies and cruel ambitions of Gamarala and his family , this is the time the four thousand or more  students who finished their studies and the students now following the course in the Institute as well as the pro good governance masses  should wage a struggle to rescue this Institution from this ravenous  ruler and his greedy family who are pillaging and plundering this country without let or hindrance.

BY a special correspondent