President stubborn as a Mule: Capital punishment even at cost of GSP ; to kill 19 based on specific choice! 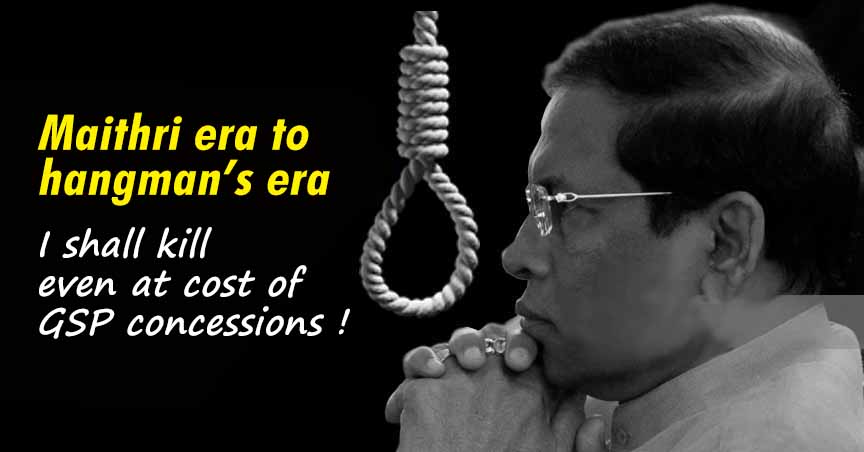 (Lanka e News – 26.July.2018, 10.45PM)  The president has decided to implement the capital punishment even  if the GSP concessions are  lost , said minister Rajitha Senaratne  the cabinet spokesman when addressing the media briefing  yesterday (25)  to reveal the cabinet decisions . The punishment will be meted out only to those facing charges of smuggling drugs into SL while already  in jail serving death sentence on charges of drug deals  ,  the minister went on to highlight.

The police sleuths have identified 19 such culprits , the minister further disclosed.

The answers provided by the minster to questions posed by the journalists are hereunder ..

Question : Has the government taken a definite decision in regard to implementation of death sentence ?

Answer:  The decision has been taken . The cabinet too has unanimously  ratified.

Question : Countries of the European  union are against it , aren’t they ?

The police sleuths have identified 19 such smugglers .It is to them the capital punishment is to be carried out. It does not apply to others who are facing  death sentence.

Question : The EU says , if capital punishment is to be implemented , granting of GSP concession may have to be reviewed?

Answer:  Yes. The president however is taking a steadfast stance that capital punishment shall be implemented, and the   other issues are to be  looked into later.

Question : That means even at the cost of GSP concessions death penalty will be implemented?

Question : But , aren’t the other countries saying it is a cruelty?

Answer:  But when this is happening continuously, why say  death penalty shall not be implemented. When it is said do not impose death penalty , that implies  the culprit shall be given an opportunity for rehabilitation. But if  he/she instead of rehabilitating , is continuing  his/her  activities even while he/she  is imprisoned , how many others are dying owing to them ?

Question : There are accusations that even prison officers are also implicated . It is alleged without their aiding and abetting , these criminals cannot  pursue their dastardly activities while being  within prison . As a government what is the action you are going to take against  those officers?

Answer:  This is not something that started since 2015. That situation existed in the prisons all along. May be it was difficult to detect that. Now the STF has been entrusted with the task of providing security to prisons. I saw names of six individuals linked   with telephone calls . Stern action should be taken against those prison officers.