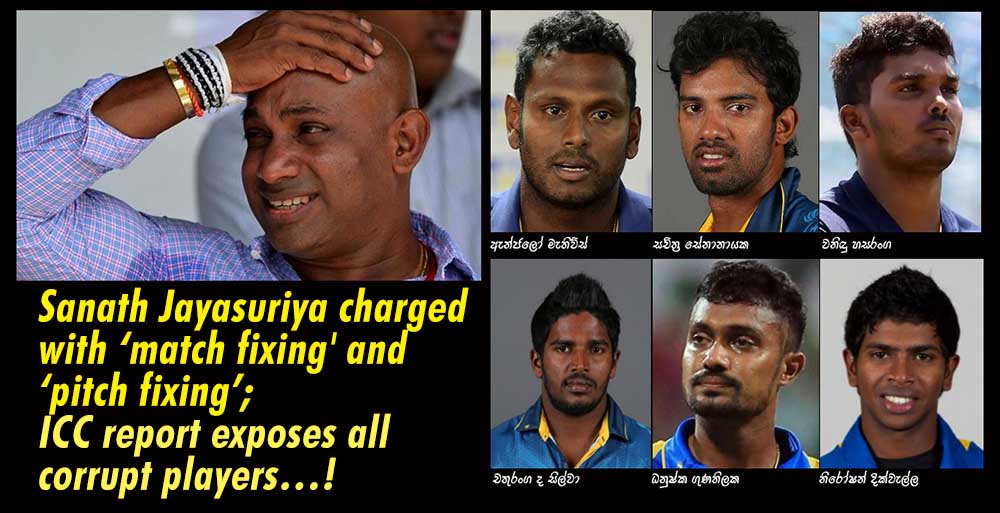 (Lanka e News -05.Oct.2018, 8.15PM) A group including general manager Alex Marshal of the anti corruption Unit of the ICC that investigated the corruption relating to Sri Lanka (SL) cricket ,recently forwarded its investigation report to the president and Prime Minister .This ICC investigation was a sequel to the the Al Jazeera channel’s lengthy program on the report exposing the corruption in SL cricket .

In the report forwarded to the president and the P.M. ,based on the discussions held by former cricket captain Angelo Mathews , Sachitra Senanayake , Vanindhu Hasaranga , Chaturanga De Silva, Danushka Gunatileke and Niroshan Dickwella with Bookmakers on ‘match fixing’ which had been taped , and their subsequent participation in the game , they have committed offences , while Jeffry Dabarera has been charged with ‘pitch fixing’.

The most rudely shocking and intriguing news is, former cricketer Sanath Jayasuriya had also been involved both in ‘match fixing’ and ‘pitch fixing’ . It is learnt that Jayasuriya had divulged the secrets of his team as well as the pitch to the bookmakers, according to the report.

The proposal made to open a branch of the Anti corruption unit of the ICC in SL after the report was handed over had been given the consent by SL, sources say. The ICC expects SL to mete out punishment to the wrongdoers.

No matter what , SL must surely conduct a separate probe into how so many cricketers and officials are facing charges of match fixing and pitch fixing specially after the SL cricket came under the most infamously famous SL’s bookie owner Thilanga Sumathipala.

How did this come about ?

Following the 2015 August general elections , with the establishment of the consensual arrangement , president Gamarala secured the opportunity to do whatever he wanted like with the country ,to wreak havoc with national cricket as never before in its history .

First and foremost what Gamarala did was , appointed bookmaker Thilanga Sumathipala who was discarded by the people and cast into the garbage bin , as an M.P. through the national list . Besides , because of the consensual agreement the ministry of sports belonged to the Gamarala faction of the consensual administration which enabled Gamarala to appoint Dayasiri Jayasekera a notorious crook and a diehard pro Rajapakse fan who was earlier on unrelentingly insulting and mocking the common presidential candidate .

Thereafter , bookmaker Thilanga who crept into that position got together with corrupt venal Dayasiri to plunge Sri Lanka’s cricket to this present pathetic plight. The present dire and dismal situation is , if one more disastrous step is taken , we will be ousted from International cricket .

The UNP also must shoulder part of this responsibility because while being in the consensual alliance it continued to turn a blind eye even after being aware of all these murky and bungling activities. Those who voted for good governance are therefore justifiably questioning , why is the UNP still safeguarding the consensual alliance , and digging its own grave ?

No country can emerge victorious in the game when it is plagued by match fixing players . In the circumstances undoubtedly defeat is writ on the wall for SL even if it plays against Lilliputians and Pygmies . Cricket being part of life of Sri Lankans , certainly this wanton debacle has contributed heavily to the people’s disillusionment and disappointment against the good governance government.