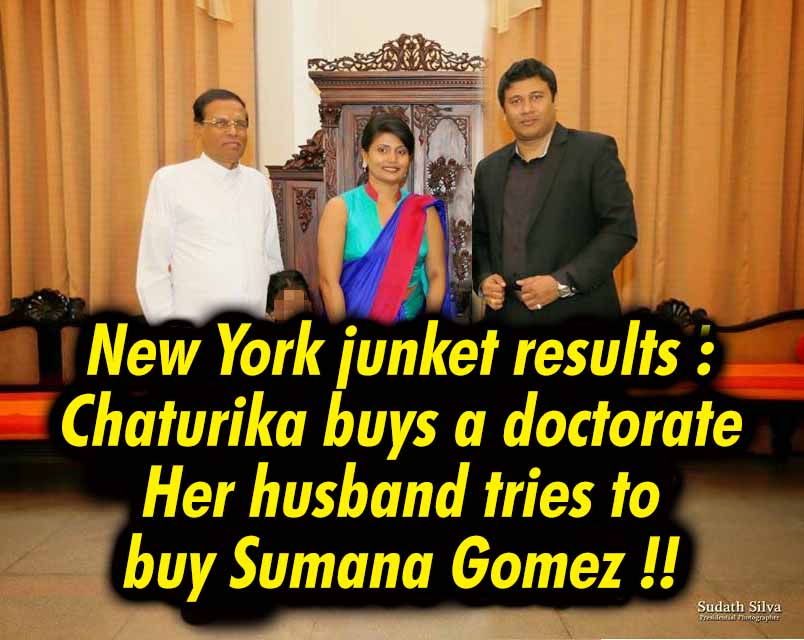 (Lanka e News - 12.Oct.2018, 6.15AM) By now the fun and frolic indulged in by the family and families of president Gamarala, who roamed the streets of America during the recent New York junket of the president wasting tax payers monies are slowly but surely coming to light . It is a matter for deep regret, at a time when the dollar has appreciated to the detriment of the motherland , president Gamarala chose to take his entire jumbo brood on this junket , when in fact as the highest in the hierarchy of the country he should have shown more concern for the country without wasting millions of dollars merely to gratify the personal whims and fancies of his family , and families of his family. Much worse ! these families who wasted public funds for their own mirth and merriment in New York only came back to the Island five days too late after president’s return. This group of family merry makers who returned later comprised president’s elder daughter Chathurika, her husband Thilina Suranjith , Daham and his fiancée Nipuni.

When it was probed why the family stayed back in New York, it was discovered , exploiting the official privileges and powers as the first child of the president, Chaturika had gone ‘shopping’ to America’s educational Institutions to ‘purchase’ a doctorate degree. Chaturika Sirisena who has not even completed the GCE advanced level is now well on the way to receive an American doctorate degree after having paid US dollars 15000.00 it is reported. Patrick Mendis who accompanied the family of the president in the US junket had made all the arrangements towards this end, it is reported.