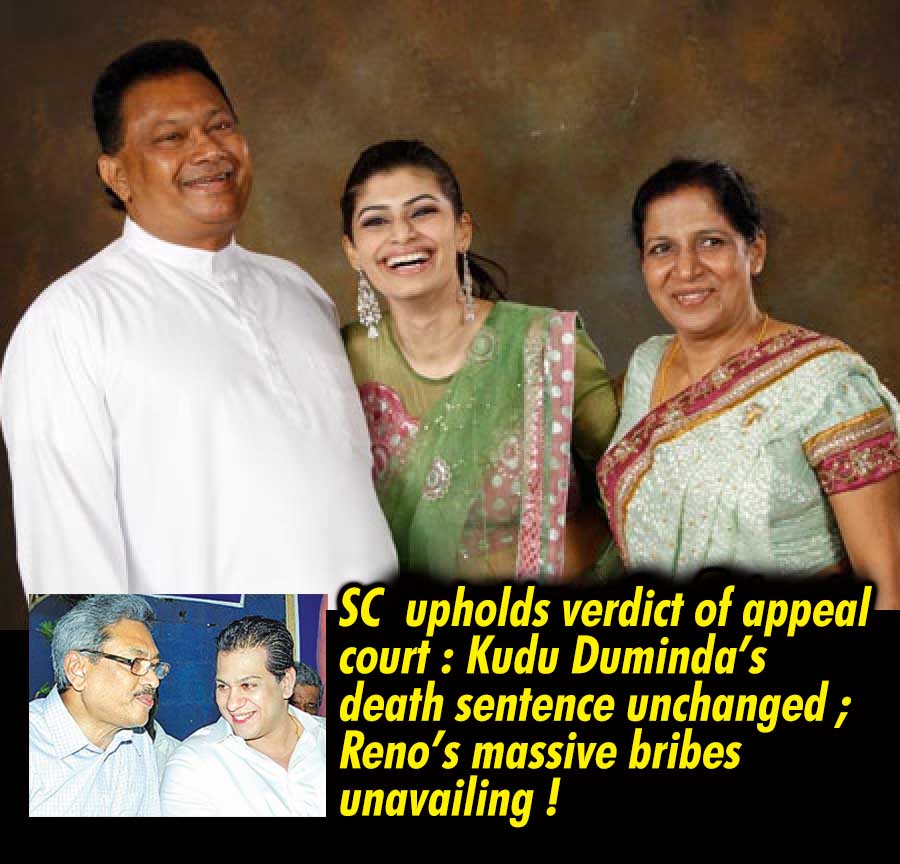 (Lanka e News -13.Oct.2018, 6.30 AM) The death sentence passed on four suspects including Duminda R . Silva alias kudu Duminda by the high court in connection with the murder of five individuals including Bharatha Lakshman Premachandra committed during the period of elections in broad daylight on the main road was upheld by the supreme court (SC) Thursday. Except one suspect all others were found guilty by the SC.

The only suspect who was freed was Anura Tushara De Mel a police officer who was providing security officially to Duminda Silva when he was an M.P. while the other three suspects , kudu Duminda, Chaminda Ravi Jayanath alias Dematagoda Chaminda and Sarath Bandara were found guilty. This verdict was delivered by the SC Thursday (11) based on an appeal filed by Duminda Silva and the other suspects in the SC against the earlier high court decision.

The death sentence was delivered by a panel of five judges , namely Priyasad Dep (chief justice) , Buwaneka Aluwihara, Prasanna Jayawardena, Nalin Perera and Vijith Mallagoda who unanimously decided on this verdict. The judgment was contained in about 100 pages.

Hiru media chain belonging to kudu Duminda’s brother Reno De Silva which launders the illicit kudu earnings went out of the way to give undue false publicity with regard to this case.

Towards this, the media coolies were paid bribes in millions.

While the case was being heard in the appeal court Reno De Silva spent colossal sums of money on bribes which were paid to various journalists to suppress the submissions made by the state counsels against the accused.

Bribes as large as Rs. one million were paid to each court reporter . It was a most notorious Divaina newspaper journalist who was enlisted to coordinate those disbursements.

Most court reports on court proceedings are obtained by a small group of court reporters who have permission to go inside . Because of Reno’s bribes , the court reports published were one sided..In addition, reporters of other media who reported only what was revealed by Duminda’s lawyers in this case , received Rs 250,000.00 each as bribe. It was a media secretary of a prominent politico who was enlisted to ensure payment of Rs 250,000.00 to each of the web journalists who posted one sided biased reports on this case. The submissions of the state counsels during the high court trial being not reported by the state media is alone proof to what extent Reno’s bribery payments had been successful.

It was the aim and ambition of Duminda and Reno to portray to the public when the appeal court trial was progressing that Duminda had been wrongly sentenced to death without valid grounds.

Though thousands of ruthless murders were committed during the Rajapakse era , the worst gruesome of them was this multiple murder which claimed the precious lives of Bharatha Lakshman loved by the people and fondly remembered as ‘Lucky aiya’, and three others on the main road in broad daylight .

Unbelievably , despite this ruthless killings, Duminda alias kudu Duminda the murderer was dispatched out of the country on the sly under the pretext that he needed urgent surgical intervention .Duminda who was used by corrupt murderous notorious Gotabaya for all the criminal and crooked activities of the Rajapakses was never a day in remand because of the support provided by Gotabaya and Rajapakses while Duminda’s most infamously famous lawyer Hemantha Warnakulasuriya too was uttering all the lies to the media .

Finally like none can escape from retributive justice , Hemantha the crooked lawyer alias liar died of cancer. Reno of course was hell bent on saving his brother kudu Duminda and went on spending endlessly in that direction while propagating the news Duminda is to be acquitted after being exonerated of all charges.

Today , belying all those dramas , all the accused including kudu Duminda (except one accused) were sentenced to death in the final chapter. The five judges panel delivered a unanimous verdict .

Now the time has arrived for the prisons

The courts have duly acted and meted out justice; now the time has arrived for the prisons to carry out its duties duly and lawfully. In the past prisoner kudu Duminda enjoyed all the comforts in prison illegally. He was never in the prison wards, but rather in the prison hospitals taking rest like in a rest house. He was served with super luxurious meals brought from his home daily. All these were illegally done.. Hence Talatha Atukorale the minister in charge of justice and prisons at least from now on , must take steps to ensure justice is dispensed duly regardless of the powers and influence wielded by the convict . Otherwise , it is better she resigns her post and looks for another job. As she was a former minister of foreign employment , she can easily get a job in the Middle East where the Arabs who have a special love and innate affinity for women would give her right royal treatment.