Two notorious judges who compromised the prestige and honor of judiciary to be promoted by a president an enemy of good governance! 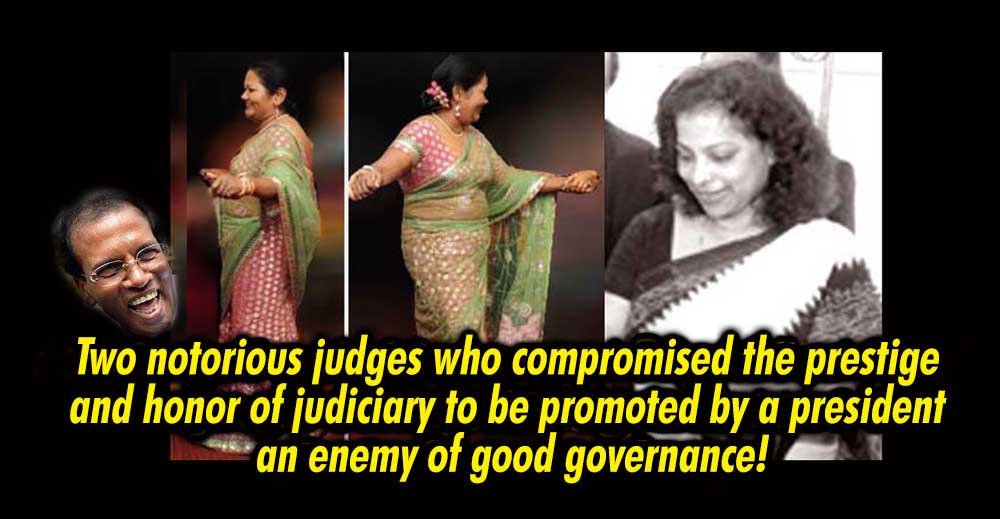 (Lanka e News -24.Oct.2018, 12.45PM) It is by now a well and widely known fact president Pallewatte Gamralalage Maithripala Yapa Sirisena while being the leader of the ruling government has all along been playing deceitful games shamelessly to the detriment of his own government which in fact has also been militating against the nation and the country .

His latest betrayal and underhand move was when he did a complete 180 degree turnaround to take measures completely antagonistic to good governance government in breach of his promises and turning his back on the mandate of the people . That is , moving heaven and earth to form a caretaker government on the sly with the same crooks of the Blue brigand who were thrown out lock , stock and barrel on a people’s verdict.

It is unfortunate Lanka e News which espouses and exposes the truth is once again saddled with the task of revealing the unsavory news regarding the most unscrupulous , unreliable, policy -less , shameless and rudderless leader .This news report relates to the traitorous anti good governance president recommending names of two judges to the Constitutional Council (CC) for appointment to the Supreme court and Appeal Court benches, while it is a well known fact these two corrupt judges became most infamous by virtue of the fact they unashamedly gave decisions most partial and biased during the corrupt nefarious decade of the Rajapakses. In fact their professional disrepute stank a mile .

Two vacancies in the SC…..

Deepali Wijayasundara ,currently a notorious appeal court judge who delivered a biased judgment against Sarath Fonseka has been recommended for the Supreme Court (SC )bench , while Sarojini Weerawardena presently another despicable High court judge is one who flagrantly violated the Judicial Service Commission circulars to make the court premises a ‘bana preaching parlor ’ during court sessions ,and provided relief to all the crooks and the corrupt .These are the two infamous judges recommended by president Sirisena best noted for making the worst selections for high posts. Of course their seniority is no issue , but the truth of the matter is , these are the two dishonorable corrupt judges who went out of the way to aid the crooked Rajapakses to override the rule of law and trampled justice during their period.

Unbelievably , it was the then president Mahinda Rajapakse who was invited to sign as an attesting witness at the wedding of the daughter of Deepali though this was absolutely against sacrosanct judicial traditions . Mahinda addresses Deepali as ‘ Chooti nangi’

After signing . Mahinda gifted Rs. one million by check to the bride. After the wedding he also sent a brand new unregistered Benz car to Deepali’s house.That car was driven by a Commando forces captain of the presidential security division to her house. Is there a more appropriate term to describe these other than as ‘bribes’ (for the services rendered in the past and the future by the judge then ) ?

It is to be noted these were gifts given while the trial of Fonseka’s ‘white flag ‘ case was on going , which means it is a most serious offense. Finally along with another scoundrel of a judge Razik a dissenting judgment was delivered against Fonseka sentencing him to jail. The only judge of rectitude and integrity who dissented was justice Warawewa.

After the judgment was delivered against Fonseka , Deepali was appointed as appeal court judge ignoring 7 other judges who were most suitable for that position by MR.

Moreover Deepali is cast In the same mould of the racists . She is an out and out racist .This was well demonstrated in the Raviraj murder trial. She disdainfully and unfairly discarded in a day the petition of appeal filed by the relatives of the deceased against the court decision delivered at midnight . The petitioners were permanently denied the right to file an appeal against the verdict .

Kusala Sarojini is not second to Deepali when it comes to personification of evil. The Sil cloth scam case was first heard by Kusala . She precluded the arrest of the accused , the former presidential secretary Lalith Weeratunge . This was because he was her ‘Lalith uncle’ . In fact it was a duty incumbent on her not to hear a case where the accused have close links with her. She should have withdrawn . Finally the decision putting Lalith Weeratunge and others behind bars was delivered by an impartial judge Gihan Kulatunge , after Sarojini was transferred to another area.

As Lanka e news revealed earlier. Sarojini is not a judge but a ‘fudge ‘ and fraud who flagrantly violated Judicial service commission circulars and invited all the crooks and the corrupt for a ‘bana drama’ within the court premises when courts were in session which is an unpardonable offence. In any other country such judges alias frauds would be behind bars not on benches .

Interestingly , good governance government president Sirisena did not name these two judges to the higher courts when he just became the president. However now, since he has done a 180 degree turnaround and his mental balance too has undergone a change -lost its equilibrium he has named them for the higher courts .

It is a universally known fact that Nanda Silva is the chief justice who has earned the rare inglorious distinction as the worst Chief Justice SL had ever known. Despite the fact such a CJ can only recommend crooked judges of his caliber , president Sirisena alias Sillysena who has no gray matter at all had followed his advice without batting an eyelid.

However the pro good governance masses are still having a glimmer of hope that the Constitutional council will have the spine and strength to reject these names proposed by a president who is right now toiling hard to undo everything that benefits the nation . This choice of judges being another of the mentally deranged president’s loony decisions, the pro good governance masses are earnestly anticipating the CC to live up to the confidence and trust they are reposing in it when it meets next Thursday.