If there was corruption in the past 3 ½ years as the President says, the President has equally to share the blame -Kabir Hashim M.P., Chairman, UNP 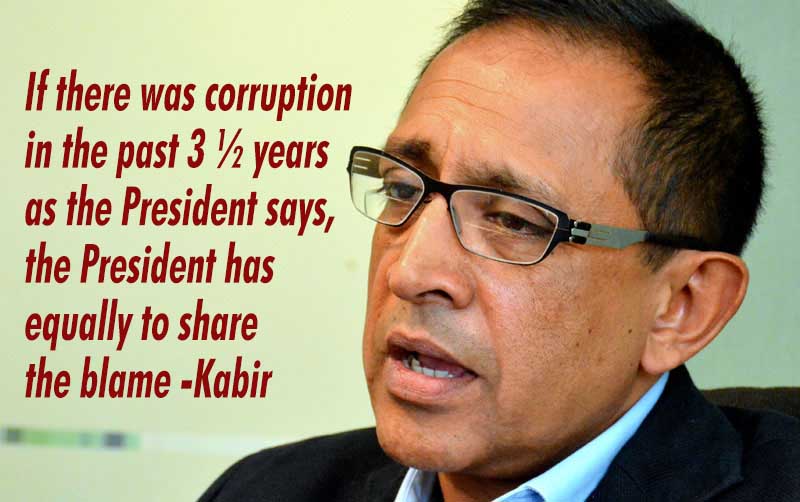 (Lanka e News -26.Nov.2018, 12.45PM) President Maithripala Sirisena, at a meeting with the Foreign Correspondents Association in Colombo has yet again tried to justify the illegal removal of Prime Minister Ranil Wickremesinghe on the 26th of October 2018 by saying, it was due to corruption and that a Presidential Commission of inquiry will be established to look into cases of corruption between Jan 2015 and Oct 2018.

The government that operated during this period was in no way “A Ranil Wickremesinghe Government”. President Maithripala Sirisena who headed the National Unity Government was not only the Head of State but also the Head of Government. All decisions were made by a Cabinet chaired by the President. If there was corruption in the past 3 ½ years as the President says, the President has equally to share the blame.
We welcome the appointment of a Presidential Commission to look into this period and we also insist that President Sirisena is not made immune to the investigation himself.

Furthermore, the President is reported to have said that he will not appoint Hon. Ranil Wickremesinghe as the Prime Minister in his life time even if legally proven that he commands the confidence of the majority in the house. This is yet another blatant violation of the fundamentals of Parliamentary Democracy. The President has no choice but to act within the framework of Constitutional Provisions and the Constitution does not make provisions for personal vendettas.

Finally, the United National Party would also like to remind President Sirisena that he has not been elected for a life time and that his term as President comes to an end in less than 12 months.