How to Dissolve the Parliament..? -Vajira Abeywardana (MP) 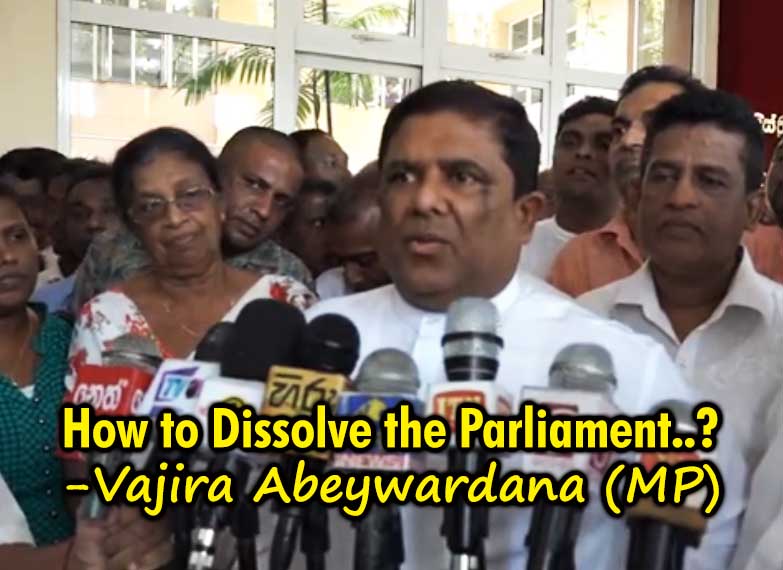 In addition to the powers, duties and functions expressly conferred or imposed on, or assigned to the President by the Constitution or other written law, the President shall have the power–

The words ‘In addition’ in the above Article should not be interpreted as ‘Notwithstanding anything to the contrary in the Constitution’. Therefore, the provisions in the above Article do not give the President additional power to disregard any other Article in the Constitution related to dissolution of the Parliament. In fact, the words ‘In Addition’ in this instance have the same meaning as the words ‘As well or Also’. Therefore, all the Articles in the Constitution on the subject (i.e. dissolution of the Parliament) should be considered together by the President in exercising his powers.

Article 70 (1) is related to this issue and it imposes limits or constraints on the President when exercising his powers under Article 33 (2) to dissolve the Parliament in the following manner:

“The President may by Proclamation, summon, prorogue and dissolve Parliament:

Provided that the President shall not dissolve Parliament until the expiration of a period of not less than four years and six months from the date appointed for its first meeting, unless Parliament requests the President to do so by a resolution passed by not less than two-thirds of the whole number of Members (including those not present), voting in its favour.”

The limits or constraints stipulated in the above Article are as follows:

Dissolution can only be done by Proclamation;

President shall not dissolve Parliament until the expiration of a period of not less than four years and six months from the date appointed for its first meeting;

During other times, dissolution of the Parliament needs a resolution passed by not less than two-thirds of the whole number of Members (including those not present), voting in its favour.

Further, according to Article 33(1) of the Constitution:
It shall be the duty of the President to –

(a) ensure that the Constitution is respected and upheld;

Accordingly, the President cannot uphold one Article of the Constitution and at the same time disrespect another in exercising his powers with respect to any given matter under his purview, unless the Constitution itself specifically allows for it. (But the words ‘In addition’ in Article 33(1) do not warrant such provision.)

As such, the President may exercise his powers under Article 33. (2) (c) to dissolve Parliament AND in doing so, shall not disrespect the limits or constraints stipulated in Article 70 (1).

This condition is very similar to the case in Shakespeare’s Merchant of Venice and when Shylock demanded nothing but the ‘Pound of Flesh’, the judge responded in the following manner:

“And you have to cut this flesh from his chest. The law allows it, and the court awards it.

This contract [however,] doesn’t give you any blood at all. So, take your penalty of a pound of flesh, but if you shed one drop of Christian blood when you cut it, the state of Venice will confiscate your land and property under Venetian law.”

Another limit related to dissolution of Parliament is given in Article 62 (2) as follows:

Unless Parliament is sooner dissolved, every Parliament shall continue for five years from the date appointed for its first meeting and no longer, and the expiry of the said period of five years shall operate as a dissolution of Parliament.

The above limit states that on expiration of five years ‘from the date appointed for its first meeting’, the Parliament would be automatically dissolved. The words ‘Unless Parliament is sooner dissolved’ is only meant to be a condition, which should not read and construed as an exclusive power given [to the President] to dissolve the Parliament notwithstanding the provisions given under Article 70(1).

Further, there is a notion that Article 33 (2) (c) has been included in the 19th Amendment to the Constitution in order to give the President the exclusive right to dissolve the Parliament at his discretion notwithstanding the provisions given under any of the other Articles of the Constitution. This view is totally wrong. The real reason for adding the said Article has been to include the power to dissolve the Parliament in ‘Article 33: Duties, powers and functions of the President’ and thereby to bring it under the purview of Article 35 (1) so that any person, whose fundamental rights in respect of dissolution of Parliament have been infringed through anything done or omitted to be done by the President in his official capacity, can apply to the Supreme Court by way of a petition in terms of the provisions given under Article 126.

The following section extracted from Article 35 (1) verifies this:
Provided that nothing in this paragraph shall be read and construed as restricting the right of any person to make an application under Article 126 against the Attorney-General, in respect of anything done or omitted to be done by the President, in his official capacity:

Provided further that the Supreme Court shall have no jurisdiction to pronounce upon the exercise of the powers of the President under Article 33(2)(g).

Therefore, it is very clear that the Supreme Court does not have sole and exclusive jurisdiction only to hear and determine any question relating to:
33(2) (g) to declare war and peace;

All other matters under Article 33: ‘Duties, powers and functions of the President’ essentially come under the jurisdiction of the Supreme Court.

Further, both Articles 48 (1) and (2) confirm that the power given to the President under Article 33(2) (c) to dissolve Parliament can only be exercised under Article 70. The above Articles are presented below.

However, if the Supreme Court decides to reject the petitions on the basis that the President had dissolved Parliament under Article 33(2) (c) and not under Article 70(1), then a contradiction will be created by that decision between Article 47 (1) and Article 48 of the Constitution.

It is also a known fact that the President dissolved the Parliament while Parliament stood prorogued. According to Article 70 (3) of the Constitution:

A Proclamation proroguing Parliament shall fix a date for the next session, not being more than two months after the date of the Proclamation:

(i) summon Parliament for an earlier date, not being less than three days from the date of such Proclamation, or
(ii) subject to the provisions of this Article, dissolve Parliament.