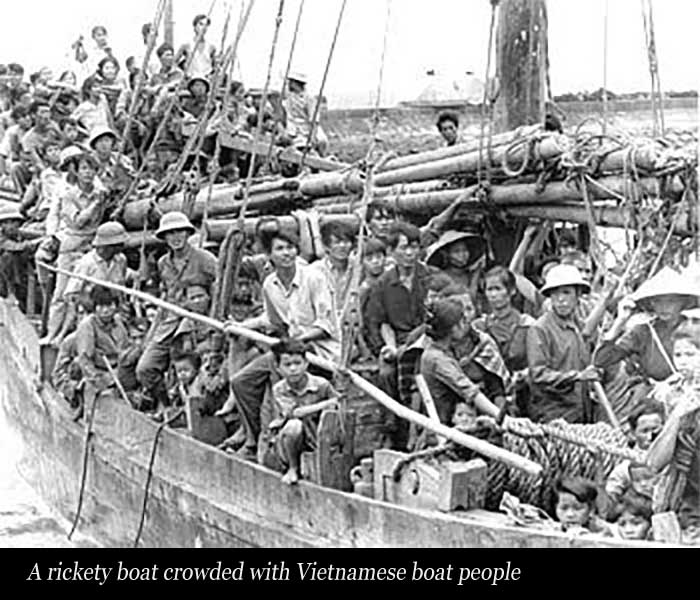 (Lanka-e-News -11.June.2019, 11.30PM) In 1985, when I was a graduate student in Washington DC, I came to know a group of Cambodian refugees. A few had been classical dancers at the Cambodian royal palace. From them, I heard first-hand accounts of the shocking atrocities carried out by the Khmer Rouge on their fellow Cambodians. In all, nearly two million, one third of the entire population, were killed in horrific ways with sharpened bamboo sticks, spades, hoes, scythes, and wooden clubs, and the usual knives and bayonets.  They didn’t want to waste bullets. Children were killed so that they would not grow up and take revenge on the killers of their parents. Ninety percent of Cambodians, were, and still are, Buddhists.

A few years later, I taught at a university in the American South. Among my students were young women who had once been “boat people” from South Vietnam, those who escaped in rickety, overcrowded boats when the communists took over their country. They were hardworking students. When they got to know me better, they related horrifying stories of their escape from Vietnam as children, how their mothers and aunts had been raped by “pirates” (actually Thai fisherman) who often killed the adult males and flung babies into the sea. Most women had been taken ashore to be sold for prostitution. The boats, short of water and food and with engines breaking-down, had the misfortune to drift into the Gulf of Thailand.

More recently, another wave of boat people have been persecuted by the Thais. Again, these refugees were the wretched of the earth, fleeing Myanmar and Bangladesh in search of a better life. These boat people who landed on Thai beaches were beaten, forcibly put on boats and pushed out into the sea. More than 500 died or went missing. The population of Thailand is 94 percent Buddhist. For the sake of brevity, I will not describe what a curse Thailand has been to neighboring countries.

Then comes the case of Myanmar.  In a country that is 96 percent Buddhist, the Muslim Rohingya have not even being granted citizenship. After decades of persecuting the Rohingya, even calling them “sub-human”, the Buddhists turned violent a few years ago.  International TV channels showed the Rohingya people being attacked by mobs led by monks. Even pregnant women were serially raped, mosques, homes and farms burned, and many, including babies, killed brutally. Of course, these scenes were not shown on Sri Lankan TV, and barely reported in our newspapers. One million Rohingya are refugees in Bangladesh now, living testimony to the brutality of a so called Buddhist country.

Finally, I arrive at our own resplendent isle, Sri Lanka. I am old enough to remember the race riots of 1958, and the reports of brutality that trickled in. Tarzie Vittachi’si Emergency ’58,* of which I own a signed copy, details the atrocities carried out by the Sinhalese, and the retaliations by the Tamils. Sri Lanka has since gone through cycles of racial and religious violence (the Black July 1983 incidents were especially horrifying), usually initiated by Sinhala Buddhist mobs, first targeting Tamils, and lately, Muslims and Christians, too. The recent attacks on Muslims following the Easter Sunday bombings is the latest instance of such violence.

Buddhism preaches compassion and non-violence, and, unlike Christianity and Islam, did not convert people of other faiths by the sword. Much has happened in recent years to sully the reputations of Buddhist majority countries such as Cambodia, Thailand, Myanmar, and Sri Lanka. Has Buddhism failed in these countries?

Occasionally, during flights, I get into lengthy conversations with the passenger on the next seat. A few years ago, following an exchange on lifestyles, beliefs, and practices, I was asked “Are you Buddhist?” In fact, this occurred twice, coming from different passengers on separate flights. At that time, I took the question as a compliment. Not anymore.

(Dr. George Braine, PhD (University of Texas at Austin) has more than 40 years of experience in teaching English as a second/foreign language at the primary, secondary, and tertiary levels. He has taught students and teachers from a variety of language backgrounds in Sri Lanka, the USA and Hong Kong.)

*Tarzie Vittachi was the editor of the Ceylon Observer. After the publication of Emergency ’58, in London, he faced arrest in Ceylon and fled to Singapore with his family. Vittachi later wrote a column for Newsweek magazine.