On Resuming the Death Penalty 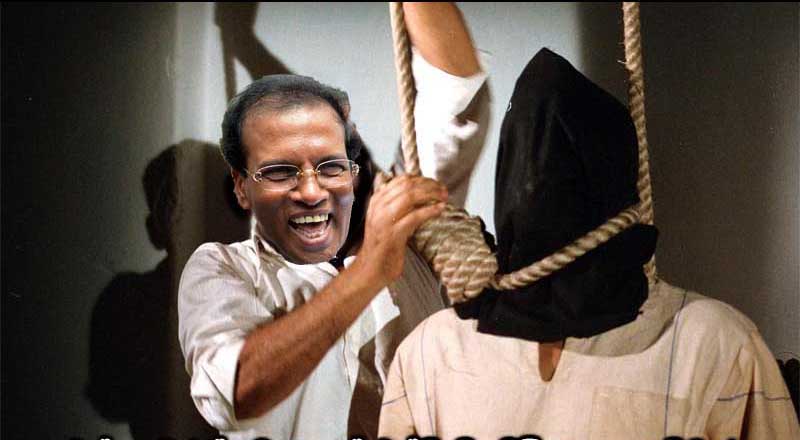 (Lanka e News -01.July.2019. 7.00AM)  President Sirisena’s decision to resume the death penalty has met with wide disapproval. The main parties in the Government and the Opposition - United National Front, Sri Lanka Podujana Peramuna, Tamil Nationalist Alliance and Janatha Vimukthi Peramuna are all opposed to it. Citizens’ organizations have condemned it. The United Nations, the European Union, the United Nations Office of Drugs and Crime (UNODC) as well as many countries have called for a reversal of the President’s decision. It has been pointed out that the application of the death penalty may also impede international cooperation to fight drug trafficking and terrorism. Many countries have laws that do not allow the exchange of information and extradition with countries which may impose capital punishment. The latest to join the chorus of opposition is the Sri Lanka Medical Association which has brought to the notice of all medical personnel that any involvement in the implementation of the death penalty would be against medical ethics.

Dr. Colvin R. De Silva stated in Parliament in 1956: “Of all things that the State may take away from man there is one thing which if you take away you cannot only not return, but you can never compensate him for, that is his life.”

History is replete with examples of grave miscarriages of justice resulting from the death penalty. To give just two examples, Timothy Evans was executed on 5 March 1950 in England for murdering a woman. Three years later, another man, John Christie, admitted responsibility for killing six women, including the woman that Evans purportedly killed! In February 1994, authorities in Russia executed serial killer Andrei Chikatilo for the highly publicised murders of 52 people. The authorities acknowledged that they had previously executed the "wrong man," Alexander Kravchenko, for one of the murders in their desire 'to stop the killings quickly.'

Results of a 2008 poll of 500 police chiefs in the United States, conducted by R.T. Strategies of Washington, D.C. showed that Police chiefs ranked the death penalty last when asked to name one area as "most important for reducing violent crime." Their higher priorities included increasing the number of police officers, reducing drug abuse, and creating a better economy.

Michael L. Radelet, Professor of Sociology at the University of Colorado-Boulder, in his 2009 article "Do Executions Lower Homicide Rates?: The Views of Leading Criminologists” published in 2009 in the Journal of Criminal Law and Criminology wrote:

"Our survey indicates that the vast majority of the world’s top criminologists believe that the empirical research has revealed the deterrence hypothesis for a myth... 88.2% of polled criminologists do not believe that the death penalty is a deterrent... 9.2% answered that the statement '[t]he death penalty significantly reduces the number of homicides' was accurate... Overall, it is clear that however measured, fewer than 10% of the polled experts believe the deterrence effect of the death penalty is stronger than that of long-term imprisonment... Recent econometric studies, which posit that the death penalty has a marginal deterrent effect beyond that of long-term imprisonment, are so limited or flawed that they have failed to undermine consensus.

In short, the consensus among criminologists is that the death penalty does not add any significant deterrent effect above that of long-term imprisonment." (Emphasis added).

Although the death penalty is in the law books, it has remained only on paper and no President under the present Constitution has implemented it.

In 2005, when the accused in High Court Judge Sarath Ambepitiya murder case were convicted, there were fervent calls for the resumption of the death penalty. Fearing that President Chandrika Kumaratunga would relent, several persons requested me to discuss the matter with her. Despite the fact that Ambepitiya was my batch mate at Law College, I met President Kumaratunga, armed with facts and figures from across the world. Before I could finish my first sentence, she cut me short and said: “Whatever people may say, it is I who have to sign a death warrant. I will never sign”. That was the shortest conversation I have had with her.  I was very impressed because this came from a person whose father and husband had both been assassinated and who herself had miraculously escaped an assassination attempt, losing an eye.

When the appeals of the accused in the Ambepitiya murder case were dismissed in 2006, again there were calls for executing at least the main accused. However, President Mahinda Rajapakse, also a batch mate of Sarath Ambepitiya, declined. I was happy to see him reiterate his opposition to the death penalty last week.

If President Sirisena does go ahead with the executions, he, as a Buddhist, will never be able to sleep peacefully; the ghosts of the four convicts will haunt him forever. President Sirisena has on more than one occasion gone back on promises and commitments, the latest being his outburst against the Nineteenth Amendment which he himself spearheaded, now calling it a curse. I will not be surprised if he goes ahead with the executions and claim a few years later that he had made a mistake.

It is apt to end this piece with a quotation from the leading judgment of the South African Constitutional Court in the landmark case of Makwanyane where the Court unanimously held that the death penalty violated the right to life: “The greatest deterrent to crime is the likelihood that offenders will be apprehended, convicted and punished. It is that which is presently lacking in our criminal justice system....”  [1995] (3) SA 391, [122] (CC). President Sirisena needs to wake up and realize that it is the same that is lacking in the Sri Lankan legal system as well.