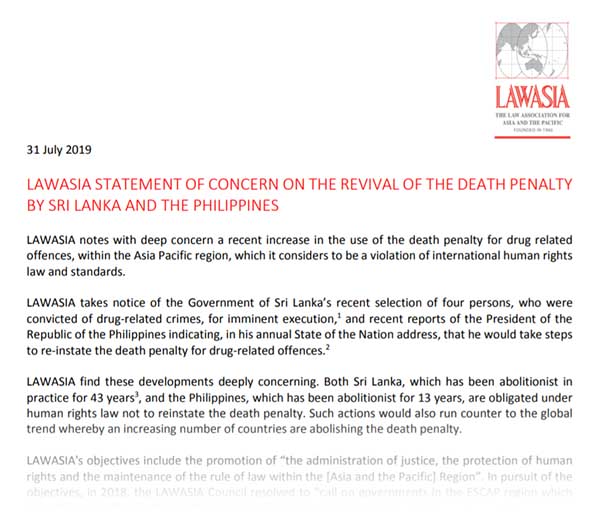 (Lanka-e-News -02.Aug.2019, 11.30PM) LAWASIA notes with deep concern a recent increase in the use of the death penalty for drug related offences, within the Asia Pacific region, which it considers to be a violation of international human rights law and standards.

LAWASIA takes notice of the Government of Sri Lanka’s recent selection of four persons, who were convicted of drug-related crimes, for imminent execution,  and recent reports of the President of the Republic of the Philippines indicating, in his annual State of the Nation address, that he would take steps to re-instate the death penalty for drug-related offences.

LAWASIA find these developments deeply concerning. Both Sri Lanka, which has been abolitionist in practice for 43 years3 , and the Philippines, which has been abolitionist for 13 years, are obligated under human rights law not to reinstate the death penalty. Such actions would also run counter to the global trend whereby an increasing number of countries are abolishing the death penalty.

LAWASIA's objectives include the promotion of “the administration of justice, the protection of human rights and the maintenance of the rule of law within the [Asia and the Pacific] Region”. In pursuit of the objectives, in 2018, the LAWASIA Council resolved to “call on governments in the ESCAP region which currently retain the death penalty to review their respective policies on capital punishment.”

LAWASIA notes that Sri Lanka has been a signatory to the International Covenant on Civil and Political Rights, 1966 (ICCPR) since 1980, and the Philippines since 1986, and draws attention to Article 6, Article 7 and Article 26 of the ICCPR ; as well as the rights guaranteed by Article 3, Article 5, and Article 9 of the Universal Declaration of Human Rights, 1948 (UDHR).

LAWASIA also notesthat Sri Lanka became a signatory to the Convention against Torture and Other Cruel Inhuman or Degrading Treatment or Punishment, 1984 (CAT) in 1992,10 and has been abolitionist in practice since 1976. The Philippines ratified the CAT in 1986.

LAWASIA believes that imposing the death penalty for drug related crimes would violate both countries’ obligations under Article 6(2) of the ICCPR, which holds that the death penalty may only be imposed for the ‘most serious crimes’.

In this regard, LAWASIA supports and adopts the interpretation of human rights law by the UN, as seen in U.N. General Comment No. 36, which states that drug offences can never serve as the basis for the imposition of the death penalty,  as also the statement of the UN Office on Drugs and Crime, which
attests to the unsuitability of imposing the death penalty for drug related crimes.

LAWASIA also draws attention to the lack of transparency in the method by which the four Sri Lankan individuals were selected, amidst hundreds who have been convicted for capital offences, 48 of whom have been convicted on drug related charges.13 This lack of transparency raises concerns of arbitrariness in the imposition of this sentence, and runs counter to Sri Lanka’s obligations to ensure the right to equality before the law, enshrined in Article 14 of the ICCPR, and to only apply the death penalty in a non-arbitrary manner, under Article 6 of the ICCPR.

LAWASIA urges the government of Sri Lanka to rescind the recent death penalty orders, and to refrain from taking any further steps to reinstitute the death penalty.

LAWASIA also urges the government of the Philippines to desist from taking steps to reinstate the death penalty, whether for drug offences or any other crimes.

LAWASIA calls on the governments of Sri Lanka and the Philippines to ensure that any action taken by the authorities concerned is in due compliance of the country’s legal obligations under international human rights laws and principles.

(For over fifty years, LAWASIA has operated as a platform to promote the cross-jurisdictional exchange of legal knowledge; as a voice of the legal profession; and as a conduit for encouraging adherence to mutually-held principles of the rule of law, professional integrity and the protection of human rights.)