It's a shame to name a reputed criminal as a presidential candidate ..! -Mangala 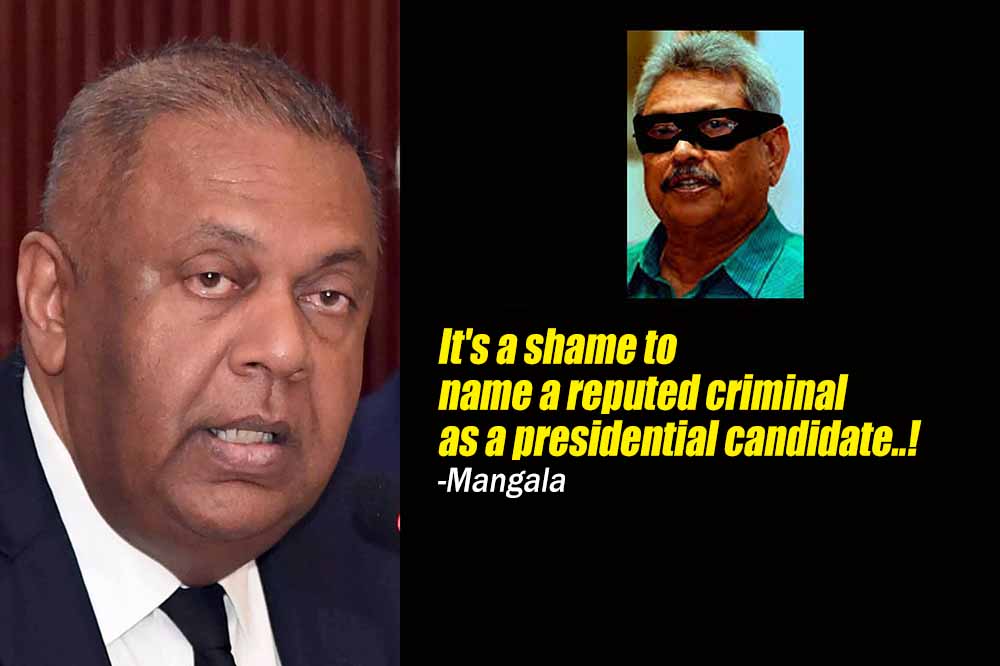 (Lanka-e-News -12.Aug.2019, 11.30PM) Earlier today, former President Mahinda Rajapaksa announced the presidential candidate for his family’s new political party, the Sri Lanka Podujana Peramuna (SLPP). For weeks he refused to confirm the circulating rumours about who the candidate would be. I have known Mahinda Rajapaksa for many years. We worked together side-by-side in the Sri Lanka Freedom Party (SLFP) under President Kumaratunga. We fought campaigns together and we won elections together. I have served in his Cabinet.

When I left Mahinda Rajapaksa’s government in 2006, he was a different man than I had once known. As President, his priority had become enriching, protecting and empowering his own family, not his country. Once upon a time, he was a true son of the soil, and a man whose heart beat as one with the ordinary citizens of Sri Lanka.

I wondered, after he was defeated in January 2015 by over 400,000 votes, and retreated to Medamulane, whether he had reflected and learnt a lesson from the error of his ways. I wondered if he regretted putting his family in charge of the state machinery and standing idly by as the nation’s coffers were robbed dry, and our journalists were bundled into white vans never to be seen again. I wondered if he regretted buttressing his political position by inciting racial hatred across Sri Lanka, first against Tamils, and later against Muslims.

In October 2018, when he conspired to orchestrate a coup d’état and illegally seize power, I realized that these were not the lessons he learned. The rule of law meant nothing to him. Democracy was only a buzzword to thunder from a stage. When Parliament stood against him, he had his minions try to destroy Parliament. It was only when the courts had the courage to stand up to him that Mahinda Rajapaksa finally aborted his coup and backed down.

He does not regret the disappearance of Prageeth Eknaligoda, the murder of Lasantha Wickrematunge or the abduction and torture of Keith Noyahr and countless other journalists. He wants any remaining independent journalists to know that if they cross the man who committed those crimes, they will be next.

These are the lessons that Mahinda Rajapaksa has learnt. If not, he would not have announced today as his presidential candidate, a man who is on trial in two courts, one for corruption of over Rs 11 billion, and another for stealing over Rs 33 million in our taxpayer rupees to build a statue of his parents. He would not have announced as his chosen successor the man who has gloated about the murders of journalists, who has jailed real war heroes like Sarath Fonseka, and who has tried to bend the judiciary to his will.

After nearly five years in opposition, if Mahinda Rajapaksa’s message to the people is that one of his brothers should be president, he himself should be prime minister, another brother should be Speaker, a fourth brother put in charge of the economy and his son put in place as his chosen successor, that tells us all we need to know: in the mind of Mahinda Rajapaksa, Sri Lanka, its land and its people are destined to be the private property of the Rajapaksa family.

Sadly, there are many Sri Lankans, whose hatred for certain segments of our country, in particular religious and ethnic minorities, lead them to gravitate towards the vision of the Rajapaksa family. They will gladly be second class citizens in a Rajapaksa family dynasty, so long as Tamils, Muslims, Christians and others are forced to live as third-class citizens. Others will support the Rajapaksas out of greed, or to escape prosecution for the sins of their part.

From an electoral standpoint, it never mattered who the Rajapaksa candidate for president was. That is my feeling about the announcement of Gotabaya Rajapaksa. I am personally ashamed on behalf of my country to have to concede that for the first time in our history, a serious frontrunner for president is an alleged criminal whose very citizenship of this country is in question. But the question never was “will it be a Rajapsaksa?”. No. It was always “which Rajapaksa will it be?”.

Truth be told, the entire family represents thuggery, corruption, deception and a flagrant disdain for democratic values and independent institutions. The candidate is a figurehead. The choice of Gotabaya had nothing to do with trying to win more votes. If at all, such a choice would diminish their electoral prospects among liberal voters and minorities. The “terminator” was chosen for a different reason: to terrify the media, police officers, judges and public servants with a simple message: cross us at your peril.

It is a desperate tactic. It will fail. Politics is a distance runner’s race, not a sprint. The person at the front of the pack in a marathon rarely wins the race. Only amateurs jump up in front. What Mahinda Rajapaksa has done is shown the entire country, many months before an election, what his priorities are, what his assets are, and where his loyalties lie. The answers? Rajapaksas, Rajapaksas and Rajapaksas.

He is the man who will unite the forces of transparent, secular, liberal democracy across our country, who will go toe-to-toe with any number of Rajapaksas and their white vans, will rally the people of Sri Lanka against tyranny and oppression, and will win.