Why did you not lift a finger against Gota..? Ahimsa ques Ranil 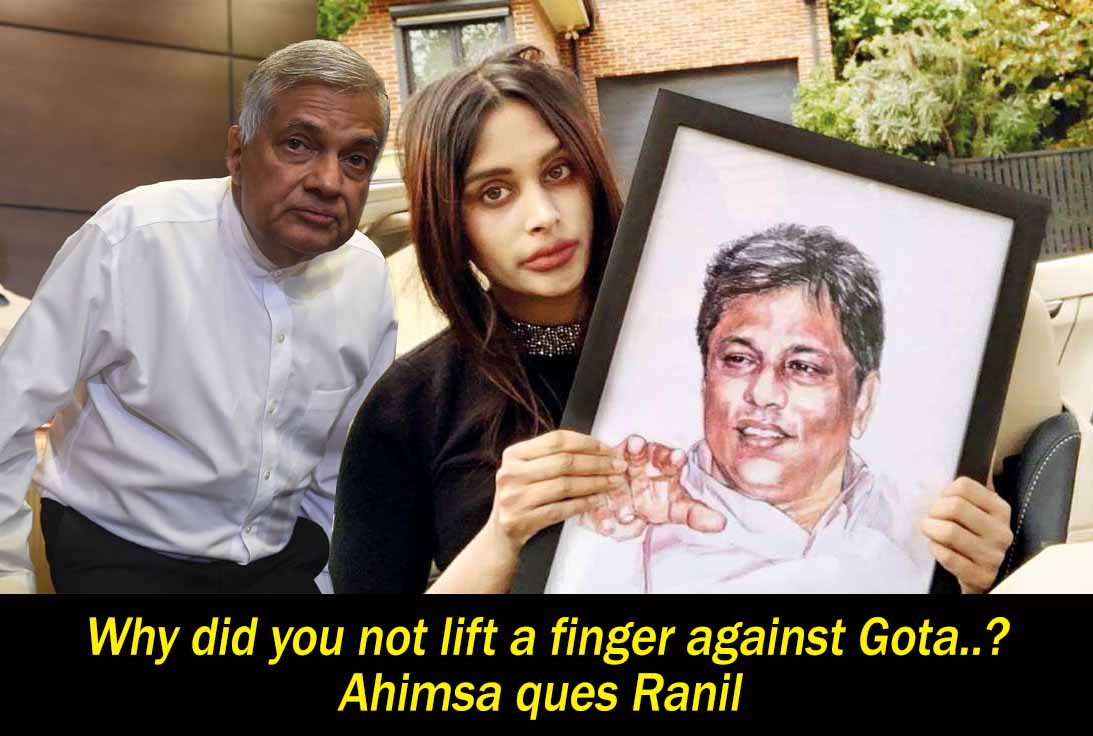 Yesterday, in a political speech, you referred to my father, and your close friend, Lasantha Wickrematunge, who was murdered on 8th January 2009. Responding to a claim by Gotabaya Rajapaksa that as president, he would create an environment without fear, you asked whether Rajapaksa would apologise for my father’s murder and several other gruesome crimes.

Let me put your mind at ease. No. Gotabaya Rajapaksa will never apologise for my father’s murder. In television interviews over the last 10 years, he has made no secret of the fact that he was proud of it. He has made up his mind not to apologise. But have you, Prime Minister? Will you apologise for spending the last four and a half years protecting and cavorting with the man you today call a mass murderer?

From the day my father died, you have invoked his name to win votes. My father’s murder was a prop in the 2015 presidential and parliamentary election campaigns that made you Prime Minister. You brought President Sirisena to power and won control of Parliament for the UNP, all by promising justice for my father’s murder.

As soon as you came to power, your priorities changed. When I met you at Temple Trees in February 2015 to appeal for your support in making sure my father’s killers saw justice, you told me that there were “other priorities” and that justice was “not just about Lasantha.”

I have since seen what these priorities are. The police, which came under the direct purview of your Chief of Staff, did not bring Gotabaya Rajapaksa to justice. Proving the MiG Deal is a critical part of proving why my father was killed. But on your watch, a corrupt officer in charge of the FCID botched the MiG Deal investigation and kept Gotabaya’s name out of it.

Because it is election season, you are publicly attacking him as a killer. But even as you do so, your Chief of Staff Sagala Ratnayake and other ministers are visiting him and spending hours at his residence, your government is allegedly issuing him irregular identity cards and passports and your senior aide and niece is openly promoting Gotabaya Rajapaksa’s campaign propaganda on on social media.

This is the kind of treatment that you and your staff mete out to the people you call murderers. However, whenever the CID needed help with my father’s case, you were nowhere to be seen.

Where were you, Prime Minister, when the army and intelligence services refused to cooperate with the investigation? What did you do when you were told a critical informant against Gotabaya Rajapaksa needed protection? And when my father’s lead murder investigator, Inspector Nishantha Silva, was kicked out of the CID by the President, why did you not lift a finger in protest?

For months now, your Attorney-General has been forcibly shutting down investigations involving Gotabaya Rajapaksa and the Tripoli death squad, covering up their involvement and pressing charges against foot soldiers. Gotabaya Rajapaksa was let off the hook in the Eknaligoda case despite two officers confessing that he personally ordered the abduction. Rajapaksa has not even been questioned about these sworn confessions. Even though Upali Tennakoon was attacked using four motorbikes, only two junior soldiers are being charged. Rajapaksa and the Tripoli team got off scot free. Will you do anything meaningful to seek accountability?

No. Instead, your family and senior staff continue to bond with Gotabaya Rajapaksa, while you blithely call him a murderer in public. If you become President or remain Prime Minister, I am certain that the mysteriously absolute impunity that Gotabaya Rajapaksa has enjoyed on your watch will continue unabated.

Now that the man who boasted about my father’s demise is formally a presidential candidate, I pray that his opponent will be an honest and courageous politician who embodies justice, equal protection under the law and mature, responsible governance. I pray that the candidate who opposes Rajapaksa will not be someone who cuts backroom deals and compromises his principles to ensure his own political survival to the detriment of his party and his country.

There is but one last hope for me and the other survivors and victims of white van era brutality. Gotabaya Rajapaksa must be challenged and defeated by a contender who is committed to delivering justice when in government, and not by someone who exploits victims to win elections and thereafter entertains people he calls murderers at his official residence.

Simply put, if this country remains at your mercy and at the mercy of your new friend, Gotabaya Rajapaksa, then there is no hope that your old friend, my father Lasantha Wickrematunge, will ever receive justice.

With the utmost sincerity,