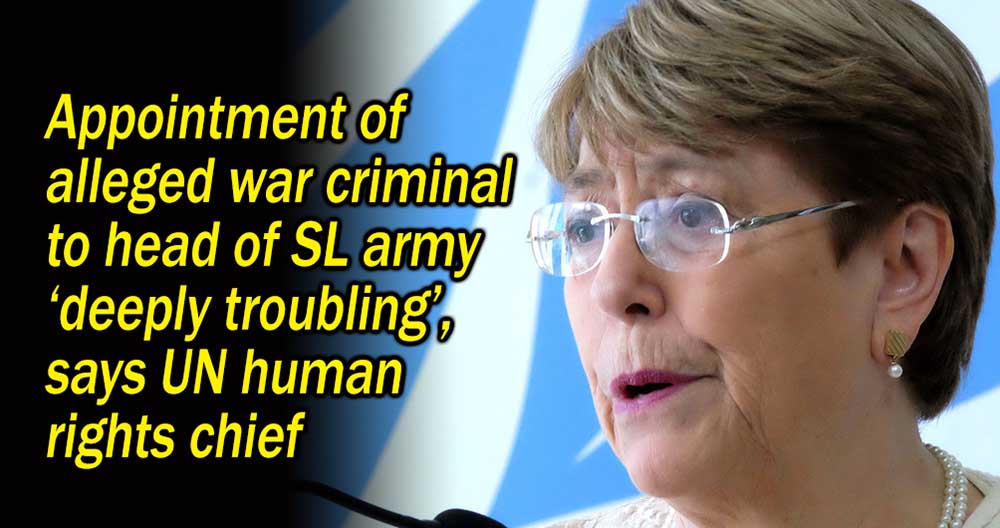 (Lanka-e-News -21.Aug.2019, 11.30PM)  The appointment of Sri Lankan Lieutenant-General Shavendra Silva as Commander of the country’s army is deeply troubling, UN human rights chief Michelle Bachelet said in a statement released on Monday (19), adding that the military leader had been given the role despite “serious allegations of gross violations of international human rights and humanitarian law against him and his troops during the war”.

Lieutenant-General Silva commanded Sri Lanka’s 58th Division during the final stages of the military campaign against the LTTE rebel Liberation Tigers of Tamil Eelam (LTTE) in 2009, commonly known as the Tamil Tigers, and UN investigations have implicated the division in alleged serious violations of international humanitarian and human rights law.

The UN High Commissioner for Human Rights said that “the promotion of Lieutenant-General General Silva severely compromises Sri Lanka’s commitment to promote justice and accountability in the context of Human Rights Council resolution 30/1”, which promotes reconciliation, accountability and human rights in Sri Lanka.

She added that the promotion “undermines reconciliation efforts, particularly in the eyes of victims and survivors who suffered greatly in the war. It also sets back security sector reform, and is likely to impact on Sri Lanka’s ability to continue contributing to UN peacekeeping efforts.”

This is not the first time that Ms. Bachelet has expressed concerns about Lieutenant-General Silva and his role in the Sri Lankan army: in March this year, she described his previous appointment, as Army Chief of Staff, as a “worrying development” in a report to the Human Rights Council.

In March, Ms. Bachelet also warned that there has been “minimal progress” on setting up mechanisms to deal with the worst crimes committed during the conflict during 2009, and called for the establishment of an independent Truth and Reconciliation Commission and a vetting process to remove officers with questionable human rights records.