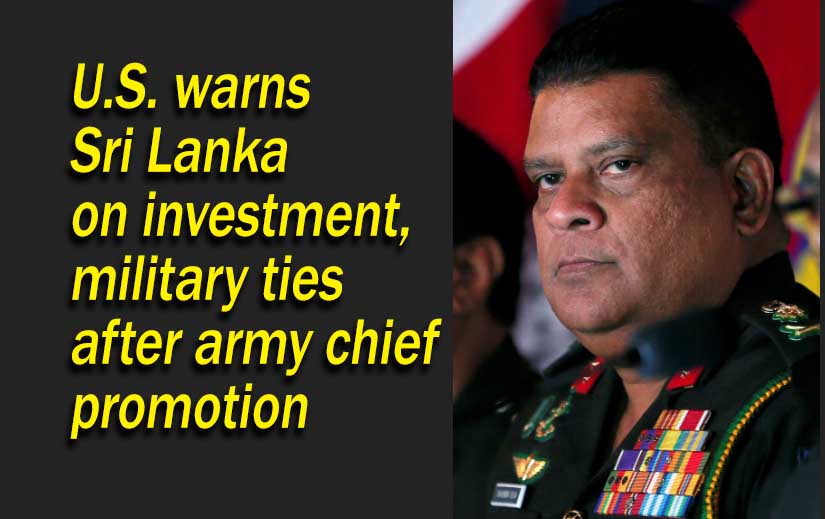 (Lanka-e-News -21.Aug.2019, 11.45PM) A senior U.S. State Department official warned on Tuesday that Sri Lanka’s appointment of a war veteran accused of serious human rights violations as head of its army could affect U.S. military cooperation and investment in the island nation.

On Monday, Sri Lanka named Shavendra Silva, 55, as the country’s new army chief despite United Nations accusations that he was involved in human rights abuses during the country’s 26-year-long civil war.

The Washington official, speaking to reporters on background, said the appointment would have lasting implications for reconciliation following the brutal conflict, which ended in 2009.

“It is a highly charged political environment in which some political factions feel there is much to be gained by playing the nationalist card,” the official said.

“It is unfortunate that this card is being played through the promotion of a general about whom vivid and well documented human rights violations are on the record. We are deeply troubled.”

Silva is credited with successfully leading an army division against dissident Tamil Tigers in the final phases of the war. Thousands of civilians were killed in the last phases of the armed conflict, including in areas declared by the government to be ‘no fire zones’ that came under sustained army shelling, including hospitals.

Silva, who joined the army in 1984 and was its chief of staff from January, has denied the accusations.

The U.S. official said there would be “limits to what we can do as we develop a stronger military relationship with Sri Lanka if the army chief is a known human rights violator.”

The official also warned of a possible impact to foreign investment.

“There are limits to what foreign investors are willing to take as far as risk if they see a situation that is leading to greater polarization,” the official added.

Asked whether Silva’s promotion could affect the MCC investment, under which a country is assessed on its commitment to democracy, the official said: “It will be one factor that will be looked at.”

Meanwhile a statement of U.S. Embassy in Colombo on Monday said it was deeply concerned by the appointment of Lieutenant General Shavendra Silva as Army Commander.

August 19, Colombo : The United States is deeply concerned by the appointment of Lieutenant General Shavendra Silva as Army Commander. The allegations of gross human rights violaions against him, documented by the United Nations and other organizations, are serious and credible. This appointment undermines Sri Lanka's international reputation and itss commitments to promote justice and accoutability, especially at a time when the need for reconciliation and social unity is paramount.

Canadian High Commission in Colombo also said it was deeply concerned by the appointment of the new Army Commander.