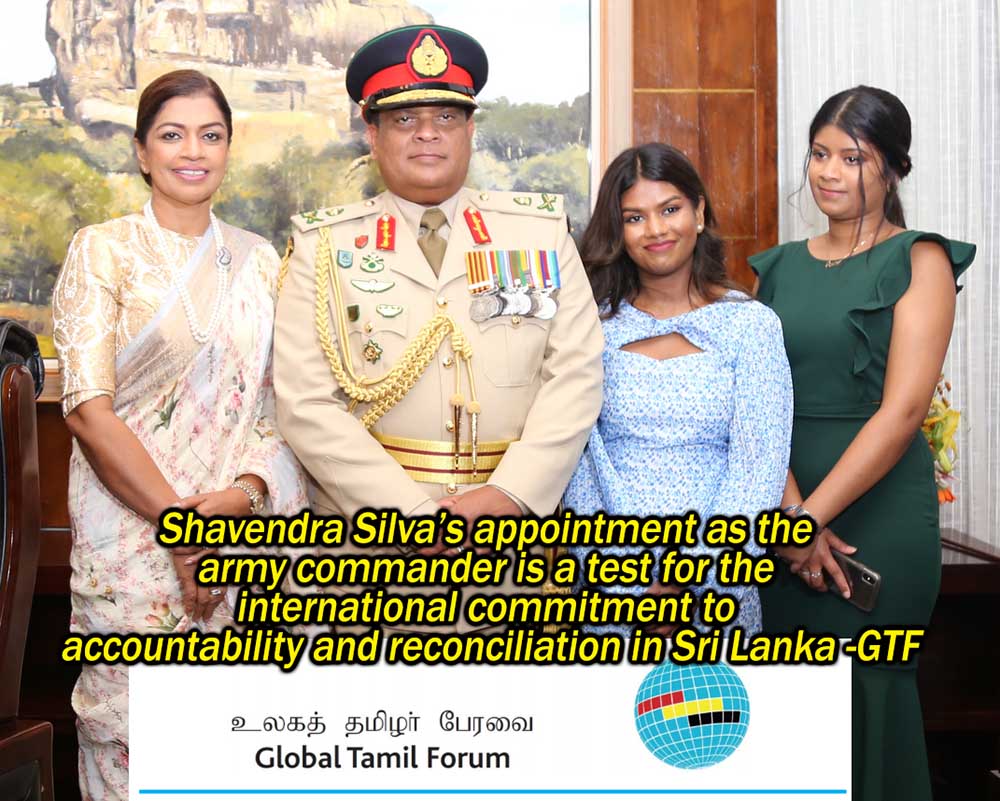 (Lanka-e-News- 24.Aug.2019, 3.30PM) The appointment of Shavendra Silva (Silva) as the new Commander of the Sri Lankan army is a deeply troubling development. For the Tamil community, this signals the end of the road for reconciliation efforts from the Sri Lankan Government. For the international community and all those interested in human rights and accountability in Sri Lanka, the message is unambiguous - the country cares very little about their views or potential consequences of its brazen actions.

There are multiples of reports, including those from UN investigations that implicated Silva with war crimes. In fact, Silva symbolised war crimes and crimes against humanity committed by the Sri Lankan armed forces during the last stages of the war. He headed the military’s 58th Division, that was deemed responsible for summarily executing surrendered Tamil militants and their families, shelling hospitals and no-fire zones packed with women, children and elderly refugees, and stopping humanitarian supplies to trapped civilians.

It is a relief that this abominable action by the President of Sri Lanka has received the world-wide condemnation it thoroughly deserves.

UN High Commissioner for Human Rights Michelle Bachelet described the appointment as “deeply troubling” and that Silva was promoted despite “serious allegations of gross violations of international human rights and humanitarian law against him and his troops during the war.” She further stressed that this appointment “severely compromises Sri Lanka’s commitment to promote justice and accountability in the context of Human Rights Council resolution 30/1” and “undermines reconciliation efforts, sets back security sector reform, and is likely to impact on Sri Lanka’s ability to continue contributing to UN peacekeeping efforts."

The Delegation of the European Union, in agreement with the Embassies of Germany, Italy, Netherlands, Norway and Switzerland, and the UK High Commission, issued a joint statement fully sharing Ms Bachelet’s concerns, and adding that “it sends a worrying message to victims and survivors of the war.” Canada expressed its deep concern stating the appointment undermines reconciliation and accountability efforts in Sri Lanka. As per the US Ambassador in Sri Lanka Alaina Teplitz, “the allegations of gross human rights violations against Silva, documented by the United Nations and other organizations, are serious and credible” and that this “undermines Sri Lanka’s international reputation and its commitments to promote justice and accountability.”

A senior US State Department official castigated Sri Lankan leaders for playing nationalistic card at the expense of reconciliation, and was emphatic in stating there are limits to “what we can do as we develop a stronger military relationship with Sri Lanka if the army chief is a known human rights violator" and “what foreign investors are willing to take as far as a risk if they see a situation that is leading to greater polarisation."

Sri Lanka’s actions are not surprising for those who intimately understand its lack of sincerity and commitment to address criminal accountability of its armed forces. In fact, the reluctance of the international community to be forthright on its assessment when Sri Lanka repeatedly failed to deliver on its commitments - which later evolved into a tendency to go along with the charade that Sri Lanka was making progress - has been unhelpful, to say the least. This eventually led to more brazen and rogue-like actions from Sri Lanka, and the latest attempt has pushed the boundary even further and is testing the level of commitment of the international community for war time accountability.

We are dismayed that apart from the political parties and civil society groups representing Tamils, no other Sri Lankan entities - political parties, civil society organisations, media or even the Sri Lankan Human Rights Commission - uttered a word of condemnation. In fact, the noises if any were in praise of the appointment and condemning the countries that expressed disapproval.

We are grateful there are strong and concerted responses from several countries. We call upon all countries that value human rights, accountability and good governance in Sri Lanka, to make their voices heard – strong and loud - now, as well as during the 42nd session of the UNHRC in September. However, what is more important is to match the diplomatic rhetoric with impactful actions. Freezing Sri Lanka’s involvement with UN Peacekeeping Operations and suspending inter-governmental military co-operation, denying travel privileges for those credibly accused of international crimes, enforcing universal jurisdiction and Magnitsky Act sanctions, and withdrawing preferential investments and trade concessions are all options the international community should seriously consider.

It is crunch time for the political leadership and the polity of Sri Lanka – they need to be conscious of, and if need be impressed upon, the fact that there is a price when a country does deviate from accepted international norms. Any further delay in powerfully conveying this message, underpinned by tangible consequences, will only encourage Sri Lanka to take further reckless steps – perhaps completely withdrawing from its UNHRC commitments. Then, the stakes will be higher, and the path to return to normalcy, respectability and reconciliation, could be arduous and perilous.

(Global Tamil Forum (GTF) was established in 2009 by a number of grass-roots Tamil groups following the end of the armed conflict in Sri Lanka. It is the largest Tamil diaspora organisation with members drawn from five continents. GTF is absolutely committed to a non-violent agenda and it seeks a lasting peace in Sri Lanka, based on justice, reconciliation and a negotiated political settlement.)