The winning formula; A heartfelt appeal to Ranil from a senior medical specialist 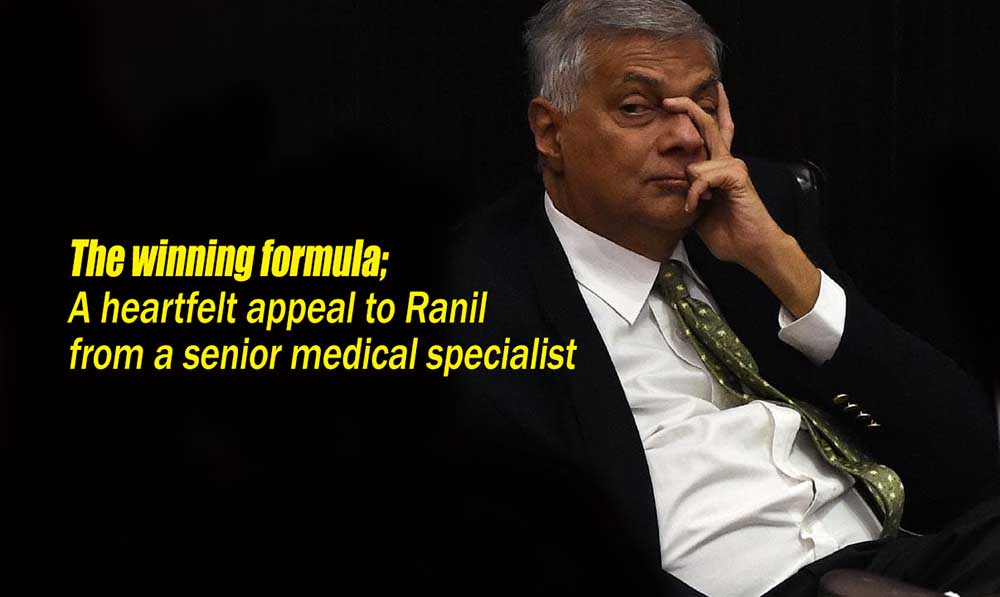 (Lanka-e-News -27.Aug.2019, 11.30PM) The upcoming presidential election is not just about electing the next president of Sri Lanka. What is at stake is democracy. Gotabaya Rajapakshe has already been nominated by the Sri Lanka Podujana Peramuna as their presidential candidate. Sri Lanka is on the verge of becoming a fascist nation run by a military junta, however elected through democratic means, akin to the machanism used by Hitler to seize power in Germany.

25 years is a very long time. When you were entrusted with the mantle of UNP leader, I had just finished advanced level examination. Over the years, we watched the UNP lose election after election. We watched you importing presidential candidates and erode the solid block vote we once bragged about. Now the UNP is merely a pauper, at the mercy of minorities. This is the reality. This is your legacy.

It is not surprising that nobody is proposing you to be the presidential candidate as the result would be a foregone conclusion. The bond scam and allowing Arjun Mahendran to escape unscathed has destroyed your reputation. The letter from Lasantha Wickrsmsthunga’s daughter where she accuses you of inaction against the Rajapakshas was the final nail in the coffin. The general consensus is that you have reached a deal with Gotabaya to ensure your status as the leader of the opposition after the election. However, this assurance is not extended to the average UNPers who stand to get beaten up, have their houses torched and lose jobs following defeat at the election.

Take a moment to ponder the fate of these people. There is only one thing between victory and defeat at the election. That is you and only you.

1)Karu Jayasooriya should be named the presidential candidate.

2)Sajith Premadasa should be named the prime ministerial candidate

Karu is the ideal presidential candidate as he is well respected by everyone. However, the grassroots are yearning for Sajith which makes it pivotal to make him the prime ministerial candidate. This is the magic combination

I hope you will be ready to make this sacrifice for the sake of the party. Karu will have no chance if he nominates you as the prime ministerial candidate as you are politically dead with no resurrection possible.

As the party leader and as the leader of the alliance, you will be expected to play a major role in a future UNP government. This draws parelal to the role played by Sonia Gandhi as the leader of the Congress while Man Mohan Singh was the prime minister. As the coalition partners trust you over all others, it is essential that you ensure that they extend the same support to Karu and Sajith.

It is time to put aside personal aspirations and to make sacrifices for the sake of democracy. I sincerely hope that you will give considerstion to these proposals and adopt this formula.

By a senior medical specialist