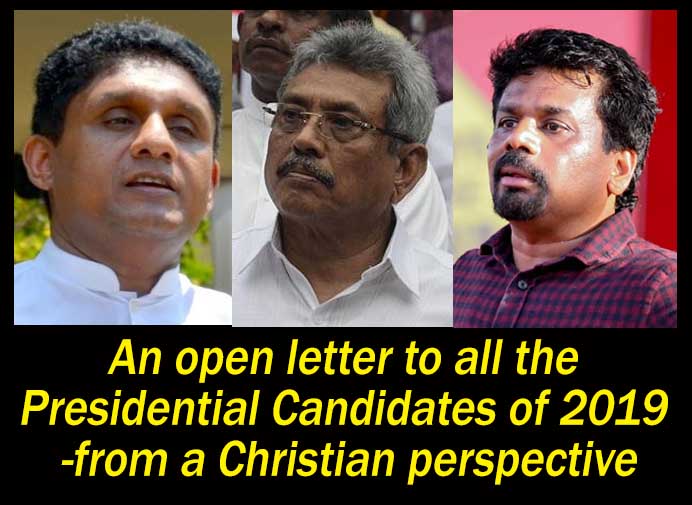 (Lanka-e-News - 29.Sep.2019, 7.45AM) I wish to address you Honorable Sirs, on a matter that may be insignificant to you, the candidates, nevertheless the principles if recognized and due attention is given, , would be far reaching and first step to stop the speedy highway to the abyss that our nation is heading for.

It is ironic that the Christian Community received attention, when Churches among other places of commercial interest were attacked, by a small group of our Muslim community. Ironic I say - as ‘it is appointed for man to die once’ and hence death is universal, although the method of death may differ. It is sad to observe that ‘terrorism’ and ‘martyrdom’ is fast becoming methods of this universal truth. In our Nation it is estimated approximately 1000 abortions takes place a day. In a Country where recitation of ‘thou shall not kill’ takes place daily, such killings of innocent lives go unnoticed and sometimes with tacit approval. Hence the approximate 275 lives loss during the Easter massacre receiving attention could be not necessarily for the evil act itself. It is evident that the reasons are political for many. Further the following detailed account of the oppression directed towards the Christian community since independence affirms this statement.

I say this as the minority Christian community has been at the receiving end from the majority community i.e. which happens to be Sinhala – Buddhist, very specially since independence.

The justification of all violence whether physical or rights violation directed at the Christian community has been justified with the perennial song of ‘unethical Conversion”.

Towards the end of the 19th century Anagarika Dharmapala among others originated these accusations. Obviously the teachings of Christ of “Love thy neighbor as thyself” and his “Great Commission” ‘the proclamation of the gospel’, which we believe as an absolute truth, was misinterpreted. Conversion can never take place without the usage of free will, and “free will is fundamental” for genuine conversion.

The same drum beat was heard from the nationalist movements in the 1940’s prior to independence. Christianity is wrongly referred to a religion of the Western imperialist, while the fact is - it is a Middle Eastern faith. Christianity was brought to Sri Lanka by the western Missionaries while all other religions in Sri Lanka were brought by Asian or Middle Eastern missionaries. It is common in countries who were colonized to reject all – the good and the bad; ‘throwing the baby with the water’ syndrome.

These are some of the issues that the Christian Protestant Community face mainly in the villages of Sri Lanka.

The following chart speaks for itself.

In South Africa, soon after the apartheid war ended in 1994 a new constitution was drawn by the Parliament elected. It was promulgated by President Nelson Mandela on 18 December 1996 and came into effect on 4 February 1997. When Bishop Tutu was consulted for his opinion as to a religious constitution in view of over 80% being Christian his wise counsel was that South Africa should adopt a secular constitution if it is avoid religious conflicts and should consider all citizens equal.

On the contrarary; countries that do not treat their citizens as equals, one of the main features of those societies are disunity which hiders development. Open Doors –a group which monitors persecution of Christians in their latest list gives the folowing countries where Christians are most persecuted.

The gradual deterioration of the religious liberty situation since independence and the country moving into ‘religious nationalism’ could be seen by the chronological events in modern history.

Under these circumstances, I urge you to give due attention to the principles addressed above, and to ensure equality and justice under strict adherence to the rule of law to all citizens so that under your rule this country would regain its status as a ‘peace loving paradise nation'.