Why on earth General Mahesh Senanayake was brought up as the presidential candidate of the national people’s movement? 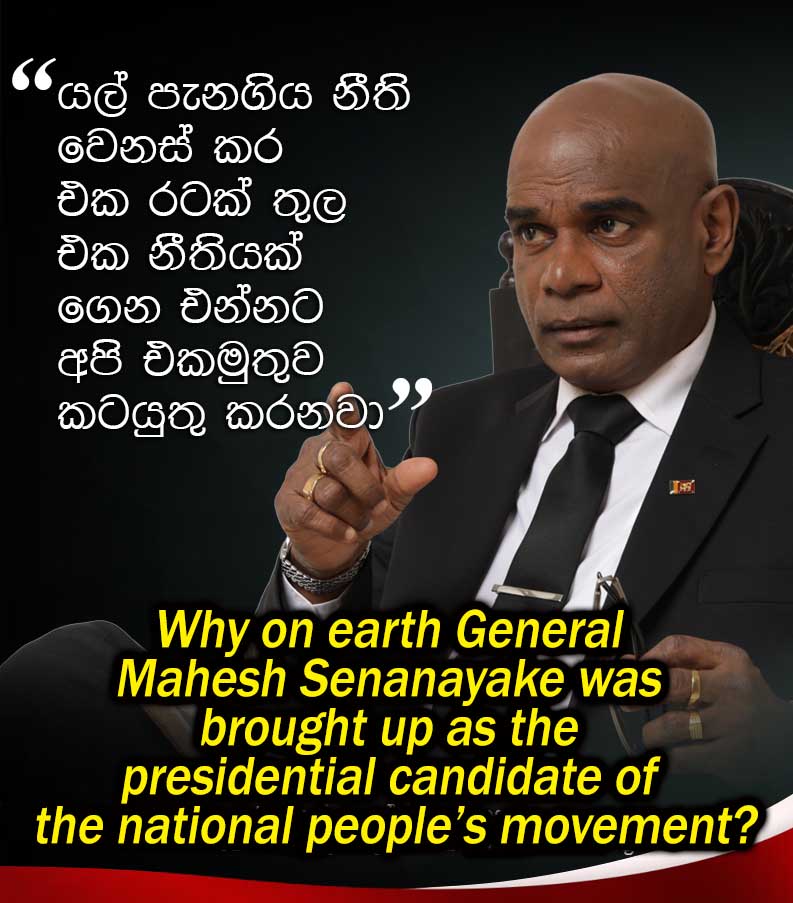 (Lanka-e-News -08.Oct.2019, 4.15PM) Simply put, because of fear of a military coup (the reason described elsewhere) if the upcoming presidential election is “too close to call”. Last time the MR regime, so sure of winning, learned a bitter lesson for not planning in advance to engineer one. This time the “perfect storm” is in place with a showboating, politico-in-uniform, have-no-scruples general, who has been the most trusted understudy rather protégé or lackey of GR as the Army Commander willing to do anything that goes. The Rajapakse cabal has managed via a jester of a president, who is now worried so much of his self-preservation rather than the security and stability of the country, and, literally,  shitting bricks, get an Army Commander that they REALLY NEED to be appointed well in time regardless an international uproar and exhortation against it. To counter the real or perceived threat stems from it, a hapless nation needs an Army Commander who hanged up the boots recently so he still has his people in place to forewarn if an untoward thing is going to happen. Citizen Perera, who is a better candidate than the recently retired Army Commander? None, hands down!

WHY NOT DR. AJITH KOLONNE? To face any eventuality or conquer a nation and hold ground you NEED a ground force: I am sorry to say, NOT Navy, NOT Air force, NOT an Intelligence service but ONLY an ARMY--for that matter, a war winning Army-- can hold ground! CIA, MI6, RAW, KGB, DGSE and ISI-no one of them has held ground throughout history, though, they have engineered successfully, either by force or “strategic communication” regime changes or conquered nations that were unfriendly to their national interests.  So, though, he is an academic, a simple man, has done a service silently to and mean well for the nation, his background is in the intelligence services of Sri Lanka.

WHY NOT FORMER AUDITOR GENERAL, MR. GAMINI WIJESINGHE? In my analytics, though he exposed corruption, a plucky government servant, is educated and calm and quite, when he speaks he avoids eye contact, kind of intimidated, has a physical weakness as he huffs rather hiccups. Coupled with that and his diminutive personality it is going to be a problem as a head of state. Though unfortunate, but is a no-no for a head of state as he has to meet and speak with other heads of states, some of whom are towering as well as intimidating personalities.  Unlike General Senanayake or Dr. Kolonne, he lacks one of the MOST important prerequisites NEEDED in a South Asian or African country that is where you have had your primary and secondary education.

For starters, like grapes are grapes, Advanced Level exam is the same across the length and breadth of Sri Lanka, but the EXPOSURE you got and NETWORKING you do or the protection and cover you have to really depend on when you need in the moment of truth is simply not there if you have no peers of your age from the same school, in your profession to resist any undue influence, impugning, undercutting, threats or intimidation. What happens when you have a chip on your shoulder and cannot effectively stand up to bullies, arm-twisters, and thuggish politicos is that you tend to acquiesce, become, wittingly or unwittingly, very pliable and malleable in their hands. For examples, do not look further than to see what happened to the recent service commanders and IGPs who did not come from the leading schools. I am going on a limb here and being honest to tell you that you have a messed up Sri Lanka administrative Service due to getting graduates, thanks to quota system enforced in selection to universities, only advanced level results being primal rather than the “whole undergraduate concept” . Its method of selection results in producing graduates for government service, lacking in vital things or not being equipped with what is necessary to be a functionary without fear or favor. The recent COPE committee videos that have come out have exposed for the discerning one the language capability, selection of tie and coat, meekness and lack of professional knowledge of government servants/SLAS personnel. They call people like them with only a university education: “Harvard empty suits!” The reason why I am harping on this is that even in the modern-day in the 21st century the “Pas Maha Balum-the five pre-requisites” that were given thought to for Lord Buddha to be born 2640 years ago ring, empirically, true.  School, race, sex, wealth, personality, education are the present-day main requisites of sort for you to be successful.

IS GENERAL MAHES SENANAYAKE A SHOO-IN OR A DARK-HORSE CANDIDATE? The simplest answer is; it DEPENDS! There are certain needs/factors to be arrayed or get set in a perfect storm for universal suffrage to speak overwhelmingly in his favor on 16 November 2019, against the candidates from the two main traditional political parties encumbered with corrupt, unsavory, unsuitable and bad actors, and running on identity politics and have been governing using the cronyism and nepotism modus operandi. For the last 71 years, sort of, either the “Sinhala Only”, “Elimination of Fraud/Corruption, Waste and Abuse”, ”Rule of Law and Good Governance”, “Drug Menace”, now, the latest, “National Security”  plank was used.

The Easter Sunday attack was the last straw. It showed how divided and vulnerable Sri Lanka was, how pernicious and extant the threat is, and WTF the successive governments have been doing. Enough was enough. The educated/youth/middle class, for the good of the many, have decided to get involved in politics, for some for the first time in life. Gone might be the days a gullible voting block consisting of the poor peasants, workers, lumpen, what have you, who were hoodwinked rather strung along with sops and false promises to unduly influence them to vote. This time early indicators are such, that trend might be coming to an abrupt end with this upcoming presidential election for good.  Traditional politicians in Sri Lanka, nowadays, it seems, are living in great uncertainty, or mortal fear--more so than ever --not being able to predict whether their candidate would be able to win due to disunity and discord in their own political party for them to continue their livelihood, as usual, that is to plunder and profit, without an iota of shame or self-respect. So, the only Machiavellian way out for these rough and tumble politicians, if a vast majority of eligible Sri Lankan voters embrace a paradigm shift for them and their future generations, is to engineer a military coup or a political coup supported by the sycophant military to ensure their disgraceful, sordid political existence using the Sri Lankan version  “Deep State.” Words of advice/Freebie: Disperse majority of “armor” far away from Colombo; break up Gajaba R to platoon-size and mix them up with other infantry units (GW/SR/VIR/SLI/SLLI/), and deploy STF in between them just prior and sometime after the presidential elections. Then you will be mostly okay.

Having said all of the above, and going by the popular saying, “The memory span of the vast majority of Sri Lankan is, sadly, seven consecutive days!’, I say, UNLESS there is an ”October Surprise”, as usually happens in the US, it is only a distant possibility or a remote chance that General Senanayake might be the next President of Sri Lanka. The “October Surprise” might as well  show up IF and ONLY IF the also-rans, leaving aside their pride, ego, ambition, and whatnot would turn searchlights inwards and appear in front of a mirror asking the most pertinent question “Am I the most suitable, fit and proper person acceptable to the nation to challenge the two candidates from the two main parties, to lead and move forward Sri Lanka for a peaceful, prosperous, just and developed island nation where everyone could live in concord?”, if you are not, then becoming a productive member/follower of a common front to unleash a tsunami of a political juggernaut is will be the right thing to do. If that happens and the common candidate does win, then this election will be the long suffered, hapless Sri Lankan voters’ Cinderella story for generations to come. Lest the hapless citizens of Sri Lanka have again played “Snakes and Ladders”, only to wake up, from their deep sleep, on the 17 November 2019 morning to find himself or herself, sadly, back again in the “Square One”!  Be cerebral when voting this time. Good Luck, everyone!