Ranil Wickramasinghe steps down from premiership...!! 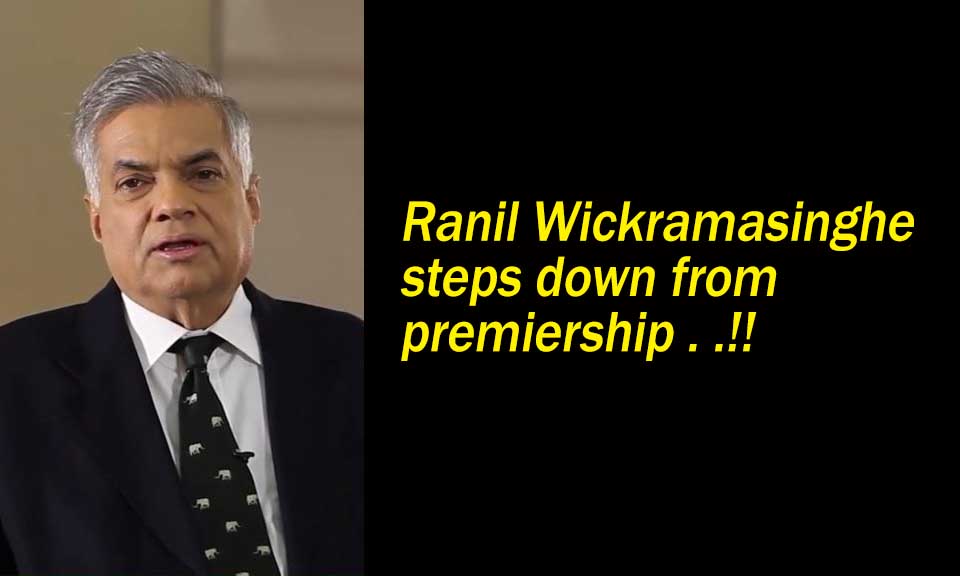 (Lanka-e-News 20.Nov.2019, 11.30PM) Prime Minister Ranil Wickremesinghe officially announced a short while ago that he has decided to step down as Prime Minister, despite a majority in parliament honoring the new mandate. He made this decision after a discussion with the UNP MPs.

With the resignation of the prime minister the cabinet would be dissolved.

The Joint Opposition Group in the Parliament which supports the new President will have the opportunity to appoint a new Prime Minister and to form a new Cabinet. The country will be governed by a temporary cabinet until the last week of February, when the president has the power to dissolve parliament.

The UNP lead Ranil Wickremesinghe will play the role of the opposition in the parliament.

When Gotabhaya's victory became clear Lanka e news reported that Prime Minister Ranil Wickremesinghe has decided to resign from premiership was around 11 am on the 17th before the final result of the presidential election was released.

Nevertheless, convening a press conference yesterday, UNP politician Nalin Bandara denounced Ranil Wickramasinghe saying he was planning to go for an emergency election to support the Rajapaksas to dissolve the government and conspire to give the Rajapaksas a large victory.

Official resignation of the premier is shown below.

Below is the special announcement made by premier Wickramasinghe

For the past five years we have worked to ensure democracy, human rights, freedom of expression and right to information, equality and harmony in our country. The country was also paved for a path of sustainable development.

The 19th amendment freed all government institutions from politicization. One result was the ability to conduct the last presidential election in a free, fair and fair manner.

The future will give us the correct judgment about what we have done. I met President Gotabhaya Rajapaksa on the 19th. We discussed the future affairs of Parliament.

I value democracy, we respect democracy, we have to act democratically. Accordingly, I decided to resign from the post of Prime Minister, allowing the new President to form a new government. I will officially announce this to the President tomorrow.

During my tenure as Prime Minister, I was humiliated, insulted as well as at with praised. I was able to hear good and bad.

I thank all those who praised me, insulted me, said good and bad.

I am grateful to all who assisted me in my work.