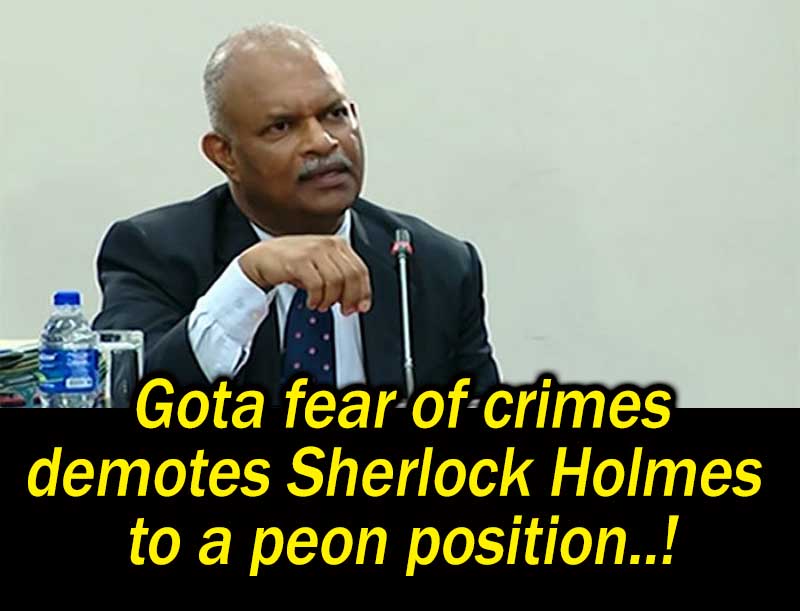 (Lanka-e-News -22.Nov.2019. 9.30PM) Gotabaya Rajapaksa who vociferated that he would create a disciplinary country which promotes rule of law, following becoming the president has demoted an efficient senior deputy inspector general Shani Abeysekara who was the Sherlock homes of Sri Lanka police, from the criminal investigation department to be an assistant to a senior DIG in Galle

The national police commission which calls them as independent institution without political interferences has decided this. The secretary to the police commission made his signature yesterday evening and immediately forwarded the letter to the police headquarters. From this one can understand the urgency to transfer Shani Abeysekara.

The vacant position of Shani Abeysekara is filled by another senior DIG named W. Thilakarathne. Shani Abeysekara was appointed as the director of CID by the national police commission on the 7th of September 2017.

Shani Abeysekara is a CID officer who successfully investigated the Royal Park murder, Angulana dual murder, Udathalawinna murder, Mohamed Siyam murder, 20 million robbery, town hall bomb and many others. Due to his efficient and impartial crime investigations a deputy inspector of police was sentenced to death.

Currently he was investigating Prageeth Ekneligoda kidnapping, Sunday Leader editor Lasantha Wickramathunga murder, the assaults against Keith Noir and Rivira editor Upali Thennakoon and the shooting, killing of three of Rathupaswala unarmed people and many other crimes committed during the Rajapaksa era.

For the Rathupaswala crime and for the kidnapping of Prageeth Ekneligoda, the CID indicted charges at the Colombo high court.

The sudden transfer of Shani Abeysekare is made to confuse the investigation and to undermine the crimes committed during the Rajapaksa era.

By transferring Shani Abeysekara it is very clear what Rajapaksa needed is to prevent the crimes committed by the Rajapaksas from detonating bombs by paid suicide bombers, provoking racism and religious bigotry, making people racial and religious fanatics being investigated. If Gotabaya wanted to create a law abiding country he will not do such an evil to an impartial, efficient, law abiding police officer such as Shani. One fine day the law abiding citizens would realize soon.