Sri Lankan Critics Fear a Crackdown Is Underway, and Some Flee - The New York Times

A Swiss Embassy employee is abducted and asked about asylum applications and investigators are banned from leaving just days after Gotabaya Rajapaksa is elected. 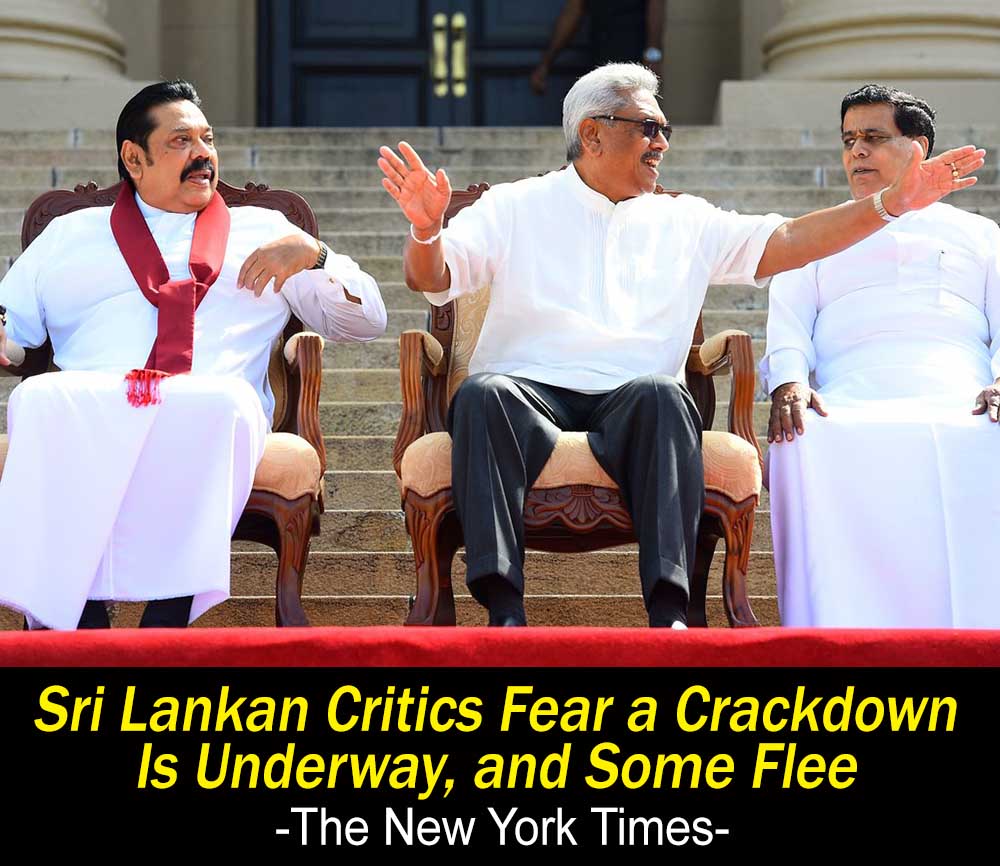 (Lanka-e-News- 28.Nov.2019, 9.00 PM) Fears of a potential crackdown on critics of the newly returned Rajapaksa political dynasty in Sri Lanka are rising just days after the election, as officials and journalists who investigated the Rajapaksas for human rights abuses and corruption began trying to flee the country, officials said.

Abduction of the diplomatic officials...

In a case that raised particular alarm, a Sri Lankan employee of the Swiss Embassy in Colombo was abducted on Monday by unidentified men and forced to hand over sensitive embassy information, Switzerland’s foreign ministry said. Officials in Colombo said the men forced her to unlock her cellphone data, which contained information about Sri Lankans who have recently sought asylum in Switzerland, and the names of Sri Lankans who aided them as they fled the country because they feared for their safety after Gotabaya Rajapaksa won the presidency in elections this month.

On the same day, Mr. Rajapaksa imposed a blanket travel ban on more than 700 members of the Sri Lankan police unit that had been investigating the family. And other police officers raided a news outlet critical of the Rajapaksas and forced several journalists to hand their computers over for analysis, in what the police said was an investigation into accusations of hate speech.

On Wednesday, a spokesman for President Rajapaksa at first denied the abduction of the Swiss Embassy employee, and then hours later said that “defense authorities have decided to look into those allegations to ascertain the truth.” More broadly, government officials said there was no intent to quash investigations of the Rajapaksas.

In the abduction case, the diplomatic officials, who spoke on condition of anonymity because of security concerns, said the men held the embassy employee for several hours and then, before releasing her, threatened to kill her if she told anyone.

The officials said the men appeared to be focused on finding information about a Sri Lankan detective who had been investigating Mr. Rajapaksa. The detective fled to Switzerland with his family on Sunday.s are banned from leaving just days after Gotabaya Rajapaksa is elected.

It was not clear whether the men were connected to Mr. Rajapaksa or were acting of their own accord as supporters of the popular leader and his political dynasty.

Switzerland regards this incident as a very serious and unacceptable attack..

A spokesman for the Swiss Foreign Ministry, Pierre-Alain Eltschinger, told The New York Times, “We can confirm that a local employee of the embassy was detained against her will on the street and threatened at length by unidentified men in order to force her to disclose embassy-related information.”

“Switzerland regards this incident as a very serious and unacceptable attack,” he said, adding that the Swiss government was “demanding an immediate and complete investigation into the circumstances surrounding the incident.”

The Rajapaksa family had held power for a decade until 2015, when they were voted out of office. Their last few years in government were marked by frequent abductions of opponents, who were often bundled away into vans by men in civilian clothing, never to be seen again.

But after a devastating terrorist attack by Islamist extremists killed hundreds of people in April, security concerns were thrust to the forefront of public consciousness, creating an opening for Mr. Rajapaksa and his family to gain in the elections.

Gotabaya Rajapaksa was defense secretary and his brother Mahinda was president during the crucial final phase of Sri Lanka’s long and deadly civil war. The Rajapaksas received wide credit within Sri Lanka for bringing the war to close. But the brutality of those years also led to a accusations against the brothers of war crimes and other abuses.

Shortly after his election victory, President Rajapaksa appointed Mahinda as prime minister, keeping the country’s two most powerful political posts within the family.

Raided the offices of a news outlet..

In a separate development that has worried Sri Lankan journalists, the police and plainclothes officers on Monday raided the offices of a news outlet, News Hub, known for its criticism of the Rajapaksa family. Several journalists said they were forced to unlock their computers for them to be examined.

An associate of the News Hub website, Dhanushka Ramanayake, said in a news conference after the raid that he feared this was the beginning of a dark period for Sri Lanka.

“This is a sign of emerging repression and a clear effort to instill fear,” said Mr. Ramanayake, who is also an opposition activist.

Ruwan Gunasekera, a police spokesman, said that the news outlet had been raided based on a complaint that it was propagating hate speech but that nothing incriminating was found.

That raid unfolded as the police conducted a separate eight-hour interrogation of a journalist at a different news outlet who is known for his fierce criticism of the Rajapaksa family.

Many diplomats had thought that Mr. Rajapaksa, who had handily won at the polls, would try to reconcile with his opponents. In a statement shortly after his victory, Mr. Rajapaksa had urged peace and unity.

“We thought there would be a period of demonstrating benign intent,” said Paikiasothy Saravanamuttu, the executive director of the Colombo-based advocacy group, the Centre for Policy Alternatives. “But this is a situation in which anyone who stands in their way, anyone who is critical of the government or the president, will be seen as the enemy. We are in slow descent into something very frightening.”

President raged against the investigations of him...

The Rajapaksa family appears focused on unraveling several investigations into accusations of human rights abuses and corruption from their time in power. Those inquiries have gained traction in recent years.

On Sunday, the president raged against the investigations of him, his family and their allies, dismissing them as politically motivated.

The investigations’ “focus was to put those who fought the war, the former navy commander, intelligence officials and me in prison,” he said in a speech to Buddhist monks. “They forced officers to say my name and implicate me in investigations.”

One case that may implicate Mr. Gotabaya had been set to begin on Wednesday, but was postponed until next month. It involves the 2010 disappearance of Prageeth Eknaligoda, a journalist and critic of the Rajapaksas. Government investigators said that a military intelligence unit abducted and likely killed him, and an army lieutenant colonel and six others who served under President Rajapaksa’s command when he was defense secretary have been indicted.

Mr. Eknaligoda’s wife, Sandya Eknaligoda, believes the trial will not go forward, and fears for her safety after a decade of accusing the Rajapaksas of abducting her husband.

The infrastructure that had been built to support the investigations into the Rajapaksas and their allies has swiftly been unraveled over the last week. The Criminal Investigations Department, or C.I.D., which has been spearheading the inquiries, has been gutted, and its powers limited.

The head of the C.I.D. was reassigned last week to a junior position away from the capital, Colombo, officials said. And the lead detective on many of the cases, Nishantha Silva, fled to Switzerland on Sunday. National television channels on Tuesday displayed the photos of other detectives involved in the investigations, accusing them of corruption and treason, after they were stripped of their personal security.

A spokesman for the National Police Commission of Sri Lanka said they would decide in the next few weeks whether the investigations would continue.

Mr. Silva was the lead detective in several investigations into Sri Lanka’s military, when President Rajapaska served as defense secretary.

“Now he will not be there to give evidence at trial,” Ms. Eknaligoda said. “These vengeful actions against senior C.I.D. officials who led these investigations will cripple the entire department — they will all be afraid to act now.”

On Monday, Mr. Rajapaksa ordered a blanket ban on travel out of the country for all 704 C.I.D. officials, a move seen as an attempt to prevent other police officers from fleeing.

Some diplomats said Mr. Rajapaksa may be trying to take stock of the government he just took over. But, they added, they would be watching closely whether the travel ban is eventually lifted or whether the ban leads to the ranks of C.I.D. being purged.

Kamal Gunaratne, Sri Lanka’s newly appointed defense secretary, said Mr. Silva had broken the rules by not seeking approval from the government before leaving to Switzerland. He denied accusations that the new government intended to derail the cases against the Rajapaksas and their associates.

“We are not going against anybody or any officer of the C.I.D. We are just following the rule of law,” Mr. Gunaratne said in a telephone interview. “This is a democratic country. It is not a military rule, where dissent will be crushed.”

During the civil war, Mr. Gunaratne led a military unit that the United Nations accused of conducting summary executions of detained rebels. Mr. Gunaratne has denied the accusations.

By Maria Abi-Habib and Sameer Yasir