Media promoted false propaganda against the Swiss embassy staff, insults against lawyers are hindrance for investigations, court orders the CID to probe inquiry..! 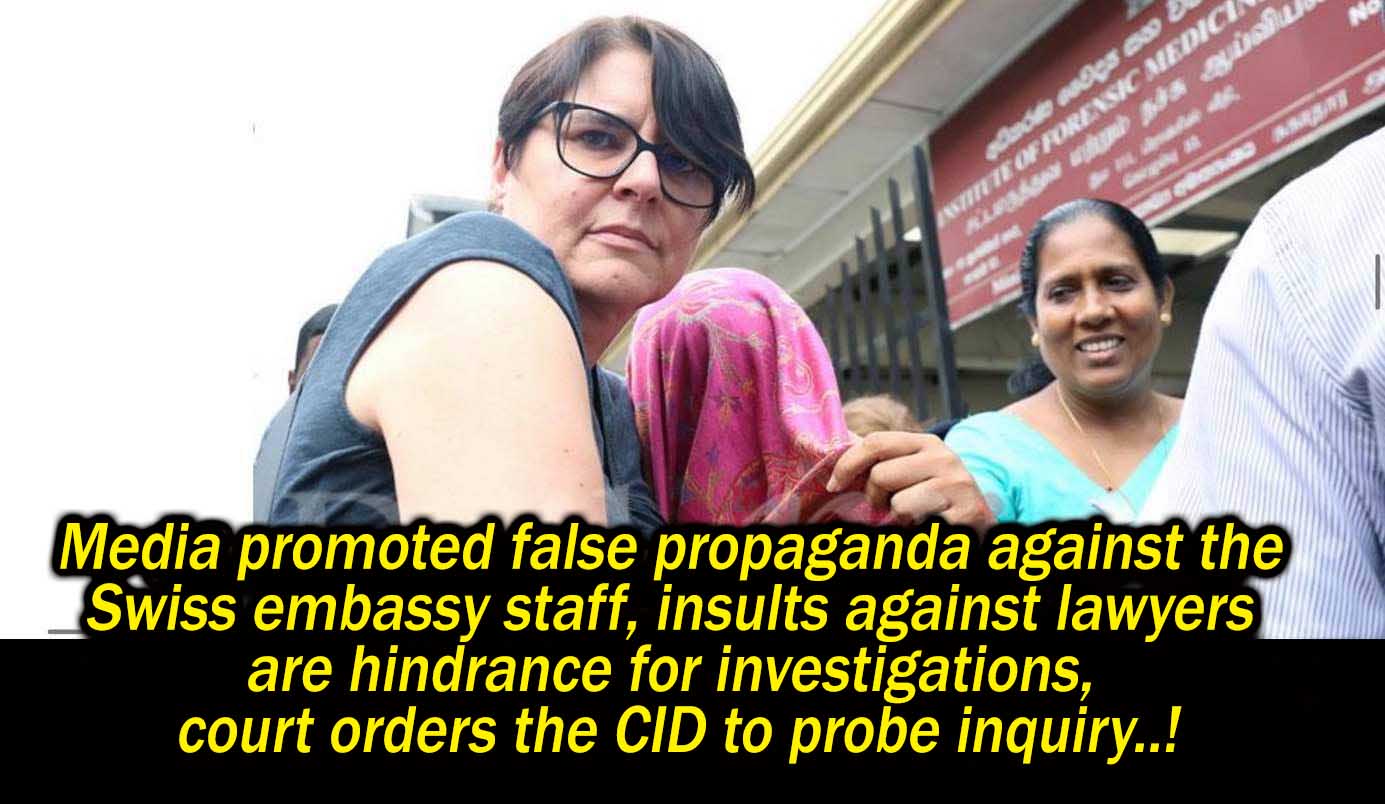 (Lanka-e-News -15.Dec.2019, 11.30 PM)  Colombo chief magistrate Ms. Lanka Jayarathna has ordered the CID to start an investigation against the sordid media and people, muddling against the Swiss embassy staff abducted and sexually harassed, the embassy and the lawyers who are appearing on behalf of the victim since it is barrier for the legal proceedings to continue.

This was after considering the requests made by lawyer Upul Kumarapperuma representing the victim and the Embassy, as well as State Counsel Janaka Bandara appearing on behalf of the CID.

Various pro Rajapaksas mudslinging websites, including Hiru, Derana and Neth, have made false statements supposedly made to the CID trying to make the victim an accused.

The mudslinging media who initially claimed that the victim was a Tamil origin, later claimed that she was a Sinhalese by name Shriyalatha which is false and she has no name as such. Another website reported that she was sacked from her work and the Swiss ambassador was called to his country which is also false. The victim has never stated to the CID that she was abducted by a van. She was threatened and sexually harassed inside the house when she visited the house to meet her daughter’s teacher.

Unofficial reports say that the husband of the said teacher is a person attached to the army intelligence. (no such statements has been made to the CID about this)

Meanwhile, when President Gotabhaya Rajapaksa met with media leaders on the 12th, the way he praised the behavior of the mudslinging media it appears the mudslinging project is carried out with the blessings of the President.

What happens if we get out from the case..?

However, Upul Kumarapperuma, who appeared for the victim when the case was opened on the 12th, called attention to this matter. He said he was dealing with police CID detective Ranjith Munasinghe and ASP Indika Lokuhetti for a longer time and he has no doubt and problem with them. He further said he has dealt with lawyer Janaka Bandara at the attorney general office in legal profession and he doesn’t have any doubt with him as well.

However due to false propaganda carried by individuals, promoted by the media, alleging false statements made before me and my lawyers supposedly told by victim woman to the CID is a great hindrance to the investigations and to the judicial process.

Kumarapperuma told the court that he and his lawyers were unable to support investigations and the judicial process due to the mudslinging carried out by the media targeting him and his lawyers. He further affirmed the damage caused when he and his law team withdraw from the case. He pointed out the court the message given to the international community that a lawyer cannot appear for a lawsuit on behalf of a foreign mission in Sri Lanka would not benefit the country’s reputation. He urged the courts to order the CID to start an investigation against the false statements and mudsling.

Those who put the coat in the trash bag...

Attorney-at-Law Janaka Bandara, appearing for the Attorney General, also appeared in the courts in response to Kumarapperuma's statement.

“Me and lawyer Kumarapperuma love this coat, we would not allow people to give statements who take this coat inside trash bags. Therefore we urge the judiciary to give an order to the CID to start an investigation regarding this” said the state counsel Janaka Bandara.

Magistrate Ms. Lanka Jayarathne ordered the police to carry out an investigation against people who give false statements to the media.

She ordered to call the case on the 17th and extended the travel ban to the victim till then.