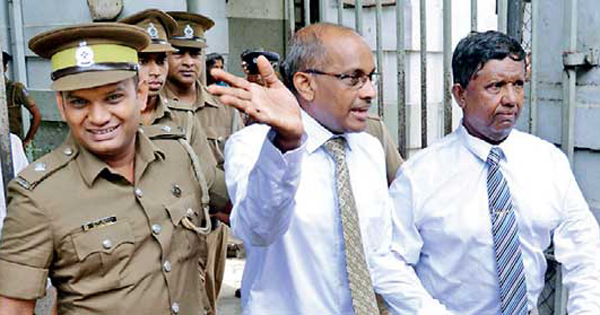 (Lanka-e-News -19.Dec.2019, 10.30 PM) When Maithripala Sirisena's was the president, his chief of staff I.H.K Mahanama and Timber Corporation Chairman Piyadasa Dissanayake were caught while accepting a Rs. 200 million bribe at hotel Taj Samudra Hotel car park. The two found guilty and sentenced to prison. I.H.K Mahanama was sentenced for 20 years and Dissanayake for 12 years rigorous imprisonment.

The case was filed by the bribery and corruption before the three bench special high court. High court judges Sampath Abeykoon, Sampath Wijerathna and Champa Janaki Wijeratha announced the decision.

The two got apprehended to the bribery officials when taking a 20 million bribe out of 55 million on May 9th 2018 when selling waste products belong to the Kantale sugar company to an Indian businessmen on May 9th 2018. President Sirisena's son and son-in-law who were involved in this bribe escaped from the scene point blank.