The conspiracy of Nandasena’s witch hunt government and mafia groups thwarted, bail out for Rajitha, mahinda shows his resentment to Nandasena 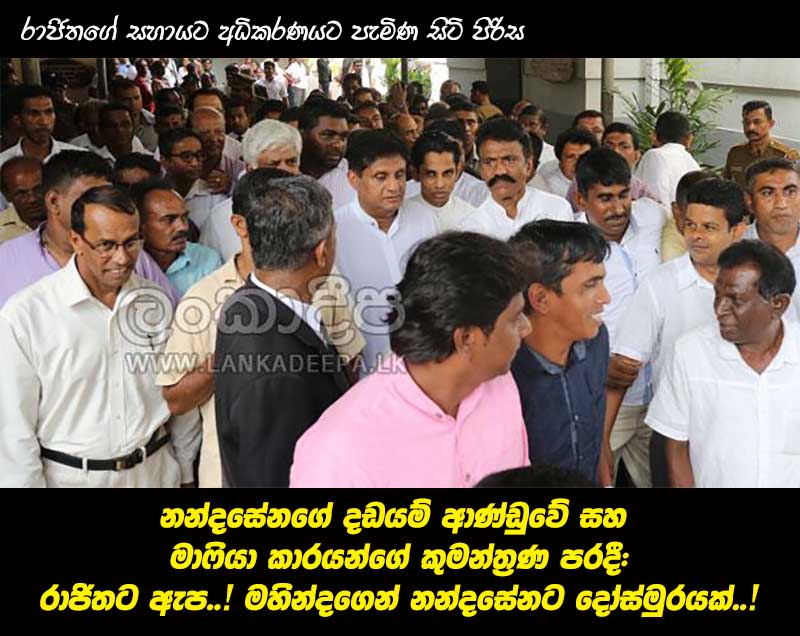 (Lanka-e-News -30.Dec.2019. 11.35 PM) Nandasena Gotabaya's witch hunt government operated by three major mafia’s (doctors mafia, pharmaceutical mafia and tobacco mafia) who has done nothing to the people of this country from the day it came to power is making tribal statements against politicians, police officers, media institutions, journalists and foreign embassies, trying to take revenge from the former health minister Rajitha Senarathne but the courts released him on bail.

Rajitha Senarathne was bailed out for two surety bails each Rs. 500,000 and imposed a travel ban. Colombo magistrate Lanka Jayarathne ordered to surrender Rajitha's passport to the courts and said to give a statement to the CID following his discharge from the hospital. Rajitha who was taking treatment in the ICU was not produced to the courts but presented a report from the doctor.

Rajitha was remanded while he was in the hospital. He was tried to take to the prison hospital but it was thwarted by the attempt of Rajitha’s cardiologists. Still Rajitha is taking treatment in the ICU.

Reports reaching Lanka e news confirms that premier Mahinda has reprimanded Nandasena for arresting Rajitha. “We made you president not to arrest people like Rajitha” and castigated him. “Your defense secretary will destroy you and all of us one day”. Despite different political opinions, Mahinda and Rajitha are friends from teenage.

When Mahinda was broke it was Rajitha who has given money from his dental clinic. During that time Nandasena was serving as a cadet officer in the army.

So far Nandasena was able to make only minor allegations of his witch hunts.