Gania released on bail ..! it is serious that attorney general accusing the Swiss head of state – Lawyer Kumarapperuma 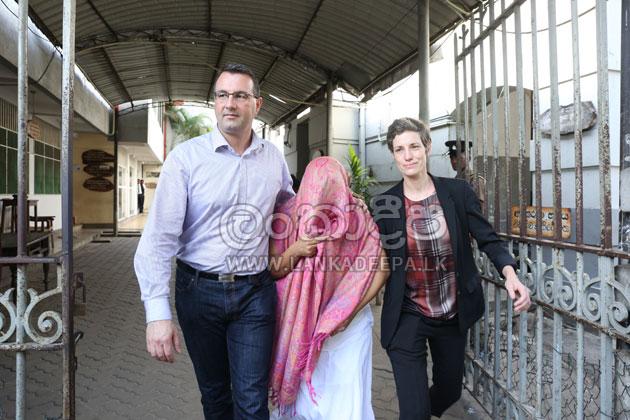 (Lanka-e-News -31.Dec.2019. 11.35 PM) The accusation against the Swiss head of state by the state attorney general representing Sri Lanka is a serious matter, pointed Gania’s lawyer Upul Kumarapperuma to the Colombo chief magistrate Ms. Lanka Jayarathna during Gania’s bail out.

When Gania was produced before the courts yesterday, Lawyer Upul Kumarapperuma raised the above argument against the state counsel lawyer Janaka Bandara who was against Gania’s bail application. The state counsel alleged that Gania embarrassed and accused the government by stating false information.

State counsel alleged that Gania would reside in the Swiss embassy, she would be given asylum in Switzerland and the embassy would give a Swiss passport and send her out of the country, which would hinder the coming investigations and therefore she should not be given bail. He also said Gania’s mother and her three children have already gone to Switzerland.

Responding to this, attorney at law Upul Kumarapperuma stated that state counsel is representing the attorney general, his argument is very serious and it represents the government of Sri Lanka.

Kumarapperuma pointed out to the courts that nothing raised by the State Counsel has been presented in the case. He said the state counsel’ss accusation that Gania’s mother and children has gone to Switzerland is false but they have gone to Singapore to spend the holidays and they will be back before the school begins.

The magistrate stated that, no evidence has been presented to justify the state counsel’s argument. The magistrate said the courts wants to know that Gania can come to the courts in future and whether any evidence against Gania to refuse bail. The magistrate said Gania’s mother and children leaving overseas is not relevant to the case. If Gania is living in her address that she would grant her bail and ordered to release Gania Banister on two surety bails of Rs. 500,000.

The bail conditions included the confirmation from the Grama Niladhari of the two guarantors address and the conformation of the permanent address of Gania Banister. If there is an address change it should be notified to the courts.

Gania’s lawyers gave their consent to produce Gania’s mobile phone for investigations. The case was postponed till 9th January.

A script “Do not bring any allegations against the government, if you do so we will make the complainer, witness and the victim an accused” – Rajapaksa Regime, was disseminated in the social media yesterday