The attorney general breaks the traditions of the judiciary; Forces the chief justice to distort the case of kidnapping and killing of 11 students; Dappula is a puppet of Gota 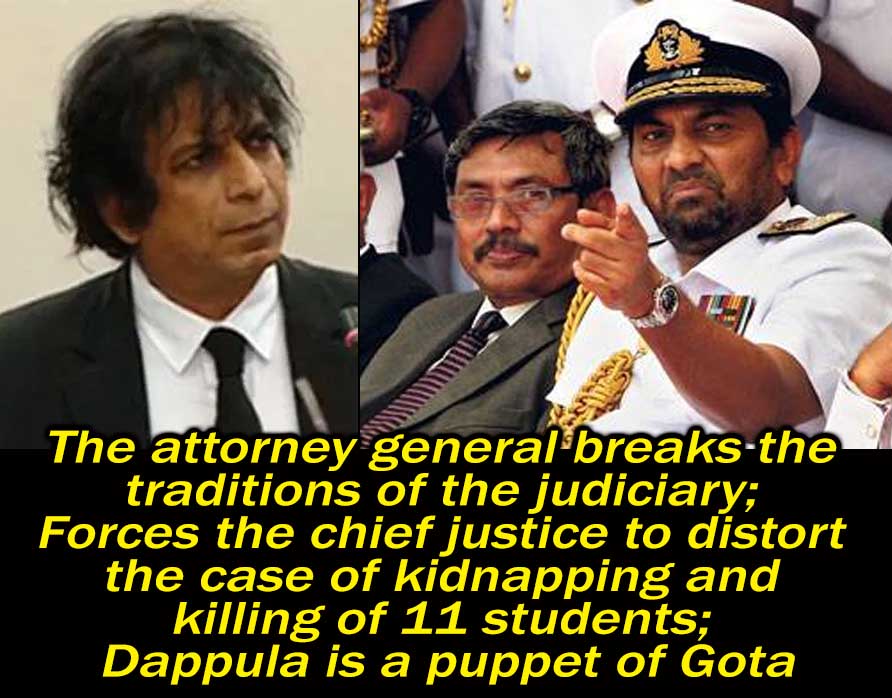 (Lanka-e-News 06.Jan.2020, 11.30PM) Lanka e news internal judicial news service reports, attorney general Dappula De Livera ignoring the traditions of the judiciary, has forced the chief justice to distort the case and rescue the 14 navy soldiers accused for the abduction of 11 students, extortion and for the killings.

The former attorney general, three days before the presidential election on the 13th November 2019, urged the chief justice to appoint three judges to the three bench special high court against the former navy commander Wasantha Karannagoda, 14 navy soldiers and filed 678 indictment charges for abduction and causing enforce disappearance of 11 students in six occasions in suburbs of Colombo Kotahena between August 25th 2008 and March 21st 2009.

The normal tradition of the judiciary is the attorney general should request the chief justice in writing to appoint the relevant judges. This procedure would normally take one or two months.

Gotabaya Rajapaksa who is responsible for all the uninvestigated crimes happened during the Rajapaksa vandalizing decade, following his presidential victory is pressuring the attorney general in order to rescue the above accuses. The attorney general too ignoring the custom judicial traditions has sent a letter to the chief justice urging him not to appoint three judges but to appoint a panel of jury for the above case.

It is not a normal judicial tradition to change the Attorney General's request made to the chief justice.

President Nandasena's strategy is to appoint a jury consisting Sinhala Buddhists because the majority of the missing youths are Tamil and Muslims and the accused are navy personal labeled as war heroes.

Sometimes ago TNA mp Raviraj murder case was also called before a Sinhalese jury panel and following hearing the case till midnight all the murderers were acquitted. Finally there was nobody killed Raviraj.

The 22nd constitutional amendment Nandasena Gotabaya trying to bring is to make the judiciary a dance according to the president’s whims.