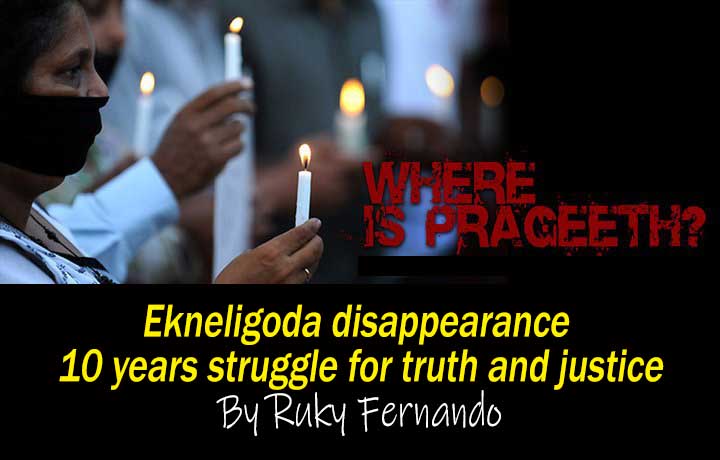 (Lanka-e-News- 24.Jan.2020, 1.30PM) Today is 10 years since the disappearance of journalist and cartoonist Prageeth Ekneligoda. It also marks 10 years of struggle for truth and justice by his wife, Sandya Ekneligoda and two young sons.

Investigative reports by the Criminal Investigation Department (CID) to the Homagama Magistrate Courts indicate that Ekneligoda was abducted from Rajagiriya in the Colombo district by Army Intelligence personnel, and taken to Giritale Army Intelligence camp in Polonnaruwa district. There he had been questioned about a book related to Rajapaksha family – which includes present President Gotabhaya and former President Mahinda. Army Intelligence personnel have been arrested as suspects and released on bail. Both the CID and State Counsel leading the case on behalf of the Attorney General’s (AG) department, had repeatedly told courts of the Army providing false information, denying possession of evidence, delaying production of evidence and misleading investigations and courts. They had also reported a lack of cooperation and obstructions towards investigations from the Army, and intimidation of witnesses. A key witness, who had seen and questioned Ekneligoda in the Giritale camp on 25th January 2010, has complained to the Police about a conspiracy to harm his life from the Giritale camp.

The trial for the 2010 January abduction began in November 2019, at a three judge special high court trial at bar, in Colombo. Nine accused are being prosecuted. Separately, in December 2019, trial began in Homagama High Court in relation to abduction of Prageeth in 2009.

Four years before Prageeth’s abduction, in 2006, on the same day, 24th January, Sugirtharajan, popularly known as SSR, a part-time provincial journalist working for the Tamil language daily Sudar Oli, was killed. Like Prageeth, he was a father of two children. He was shot less than 100 meters from the Eastern Governor’s office and about 200 meters from his own house. Before the killing, SSR had been feeling insecure and wanted to find a safer house in a different location. A house had been identified, but he was killed before he could actually move. The reason appears to be the photos he took of 5 youth murdered on the beach of Trincomalee on 2nd January 2006, popularly known now as the “Trinco 5 case”. The military was trying to prevent anyone, even the families of the youth, access to the mortuary to see the bodies, but SSR had persisted. The photos he took were published on “Sudar Oli” newspaper on 4th January 2006. They had shown clear gunshot wounds, thus, disputing the version that the youth had not been shot dead. Reporters sans frontières (RSF) had noted that SSR had also detailed the abuses committed by Tamil paramilitary groups including the EPDP in the Trincomalee region, the day before his murder. One journalist friend of SSR in Trincomalee said he had spontaneously rushed to the spot of the killing when he heard the news, but later, was too scared to go to the hospital to see the body or even for the funeral. Two days later, he had got a letter, from group called “Force destroying the Enemy”. The letter had accused him of canvassing for Vanni Tigers, that 3 such persons had been identified, verdict had been delivered and implemented on one person (Sugirtharajan) and that he should count his days, as he was going to be the 2nd.

Death threats to journalists and continuing violations of free expression

Yesterday, 23rd January 2020, seven Tamil journalists in Eastern district of Batticaloa were threatened with death, through a leaflet left at the Batticaloa Press Club. A police complaint was lodged, but no protection was offered by the police. About 30 incidents threatening freedom of expression had been reported in local media in 2019, including arrests, questioning, assaults, threats, intimidations, and restrictions of journalists, media personnel, writers, artists and raids on media offices. Also in 2019, during the time of the former president, the state owned TV “Rupavahini” was reported to have been brought under Ministry of Defense and the ICCPR Act was used and threatened to be used against writers. Self-censorship has re-emerged after the presidential elections.

New challenges for truth and justice

There has been some progress in perusing justice for Prageeth, but there is also uncertainties and fears that the progress achieved may not be sustained through the two trials which have just began. After the November 2019 presidential elections, there has been dramatic changes in the CID whose investigations and reports to Homagama courts had enable the trial to commence. A top investigator in the CID had fled the country and the Director of the CID was transferred. During the presidential election campaign, the present President had pledge to release all war heroes.

Compared to Ekneligoda, there has been very little national and international interest about Sugirtharajan, murdered four years before Ekneligoda disappeared. Not surprisingly, there is no progress in investigations and no arrests. Justice for Sugirtharajan is unlikely, as it is for killing numerous other journalists and disappearances of tens of thousands of Sri Lankans.

On 17th January 2020, the new President followed in the footsteps of former Prime Minister Ranil Wickramasinghe in making casual, insensitive and irresponsible statements that disappeared Sri Lankans are dead, without providing details of how, where, when and at whose hands they died to families. He seems to be ignoring the efforts of families of disappeared – some Tamil families have been at continuous roadside protests in the North for nearly three years, others have perused court actions in North and South, held discussions with the political leaders including former President, and involved in variety of initiatives to know the truth – about their disappeared sons, daughters, brothers, sisters, husbands and even grandchildren. The President had also chosen to refer to them as “missing” and tell this to the UN Resident Coordinator instead of to the families of disappeared. The President also says “Most of them had been taken by the LTTE or forcefully conscripted”. It is true that LTTE had taken away many, but many families of disappeared have personally seen their family members and others they knew been taken away by the Army after surrendering at the end of the war – this includes children and a Catholic Priest. They have stated this to Presidential Commissions of Inquiry appointed by Gotabaya’s brother Mahinda Rajapakse and also in Sri Lankan courts. President’s statement saying that death certificates will be issued is also very much concerning, as families only want to have death certificates after knowing for sure their family member are dead, such as by seeing the body, ascertaining identity of remains and / or knowing circumstances of the death. It is also a step backwards from the 2016 amending of the registration of deaths (temporarily provisions) Act no. 19 of 2010 to facilitate issuance of temporary “certificates of absence” till fate and whereabouts of disappeared persons are confirmed.

In this bleak scenario, there are signs of hope – journalists and others who continue to reveal uncomfortable truths, ask difficult questions, challenge the powerful and the rich and expose past and ongoing abuses such as corruption, militarization, environmental problems, repression of religious and ethnic minorities etc. Many survivors, victim’s families and affected communities continue to pursue truth and justice. On 28th January, media freedom organizations have organized the annual “Black January” commemoration. Despite fears, defiance and resistance is alive and must be nurtured.

Prageeth Ekneligoda’s wife, Sandya Ekneligoda is an icon of defiance, resistance and hopes for justice. A symbol of the power of the vulnerable, overcoming the vulnerabilities of the powerless.  She had braved death threats to her and children, intimidations, discrediting to pursue truth and justice. Hostile posters had appeared in public places against her and there has been online vilifications. Around 2012, she was subjected to harsh questioning in courts by a Deputy Solicitor General at the Attorney General’s Department, implying her search for truth and justice for her husband was bringing the country into disrepute. When Mr. Mohan Peiris, the head of the then Government’s delegation to the UN Committee Against Torture claimed that Prageeth was living abroad, Sandya wrote to the Committee to make further inquiries and in Sri Lanka, persisted in getting Mr. Peiris to testify in courts. She has been in courts more than 100 times, sometimes alone, despite the hostility of suspects and accused from Army Intelligence (and their supporters). When she was threatened inside court premises by Buddhist Monk Galaboda Ethhe Gnanasara, leader of the Bodu Bala Sena, she complained to the police, and later resisted attempts to “settle” the case through mediation. The Magistrate at that time, also complained about the Monk’s behavior in courts on that day and the Monk was convicted for both cases. The former President pardoned the monk, but Sandya is now challenging that pardon in courts. As a mother and a wife, Sandya wrote to the then President Mahinda Rajapakha’s wife, appealing for the first lady’s interventions to help find Prageeth. She stood outside the parliament with her teenaged son and distributed appeals to parliamentarians. She and her son went to the Galle Literary Festival and distributed appeals to the writers and others gathered there. She took the initiative in organizing numerous protests and vigils in Colombo. When it became obvious that Army was not cooperating with the investigators, Attorney General’s Department and courts, Sandya met the then Army Commander personally to appeal for help. She also met with diplomats, UN officials, international organizations and foreign journalists to generate international support to seek truth and justice. She worked with Prageeth’s friends and concerned people to publish books with his articles and cartoons. She also supported Tamil families of disappeared in their struggles, visiting and joining them in protests in the North and talking about their struggles in her own work. And alongside all of this, she also had to struggle to bring up her two teenaged sons, now young adults, trying to fill the void of the disappeared father.

Although I never knew Prageeth personally, in the last ten years, I had spent some significant amount of time with Sandya. Often on the streets at vigils, protests, religious events – in Colombo, but also in North with Tamil families of disappeared. Also in courts, at seminars, meetings. At the UN and with diplomats, foreign journalists. Sometimes interpreting for her. And at her house. This ten year long association with Sandya has been very challenging – her energy, proactive and regular initiatives, courage, determination is difficult to keep up with. But it’s also been one of the most rewarding and inspiring experiences for me as an activist.