Bring the Arjun gang, Cabral gang and the politicians who advice them before the law - MP Handunnetti (Forensic audit report here) 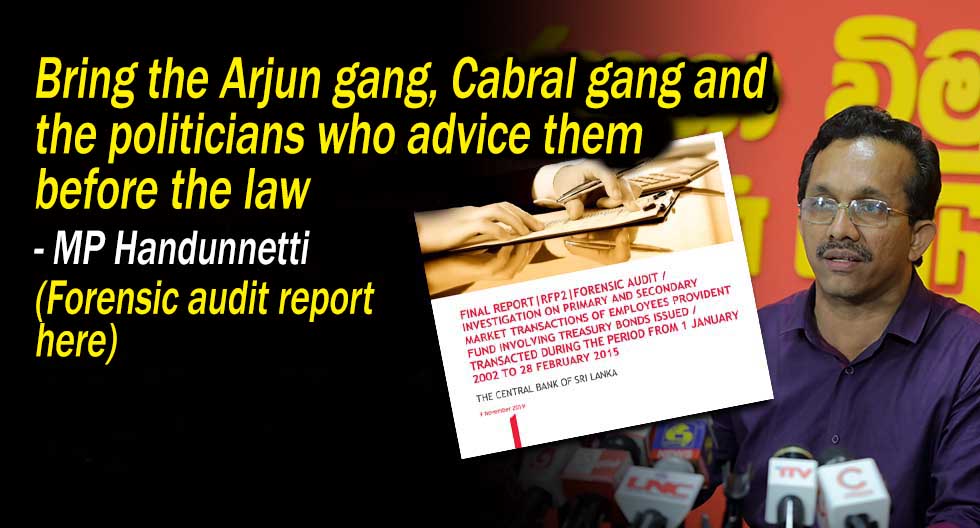 (Lanka-e-News- 25.Jan.2020, 11.30PM) Forensic audit report done by the COPE committee reveals that the central bank bond losses during the Mahinda era is Rs. 10470 million and Rs. 689 million during the Ranil era. Rs. 1200 million belong to the Perpetual treasury has been held by the Central Bank for the loss of Rs. 689 million during the Ranil era. The Rs. 10470 million losses happened during the Mahinda era is irrecoverable. Sunil Handunnetti, former chairman of the COPE Committee, today(24) revealed to the public the theft of public money by several families over the years.

Sunil Handunethi said this speaking at a press conference held at the head office of the JVP at Pelawatta today 24th.

We are exposing this corrupt ring to the country..

“We need to do a systematic detailed study of the biggest financial crime happened in our country with the five part forensic audit report and its attached annexes. As the JVP the political core we presented time to time has been confirmed again by this forensic audit report. We have said for the first time that there is a corrupt ring in our country. This corrupt ring is seen in many sectors including the political and financial sectors.  That corrupt ring has no difference whether it is UNP or SLFP. This corrupt ring is in the financial market. At one time they are in UNP and in a another time they are in the Podujana Peramuna. There is no difference whether they are in the opposition or in the government. Their job is to plunder public money from wherever it is. We are exposing this corrupt ring.

Why Cabral got panicked..

"This forensic audit report contains a description of a family tree. It has exposed from 2006 to 2015, Ajith Nivard Cabraal family group and from 2015 – 2016 it was Arjuna Mahendran family group. Due to our involvement these family tree was broken. If it was not broken, this family tree would have gone from 2015-2020, 2020-2025 and forward. We did not have technical knowledge to do this forensic audit. That was the reason as the chairman of the COPE committee I recommended the Central Bank to do a forensic audit report. At that moment Ajith Nivad Cabral told a news paper why this audit is done from 2002. However if an audit has to be done that should be done from the start. Why should we be against it? Why Cabral got panicked? No Central Bank governors before has got panicked. Cabral got panicked because there was something to hide. People should know them.

This forensic audit report was done only for the sole legal purpose. It is similar to a forensic autopsy report. This forensic audit report related to the bond case is prepared to report to the courts. White collar criminals from 2002 to 2015 should be brought to the courts. Both the Arjun Mahendran faction and the Cabral faction and the political leaders who advised them should be brought to court. The financial market in our country is not so developed and strong. There are only around 200 people operating this financial market. Only a small group of four or five families manages this financial market. This is a group affiliated political, family, religious and college wise.  It is their monopoly power that controls the financial markets
of our country."

White-collar criminals plundering the country not even investing a rupee..

"We suggest an impartial panel of experts to read this forensic audit report. Then it will be clear who has robbed the money of innocent people in our country. How our workers' EPF funds were plundered. The money of the farmers, laborers and plantation workers of the villagers are being robbed by these financial fraudsters. These white-collar criminals are robbing the workers' hard-earned money at no cost.

There are five reports on this forensic audit. The first report is about the bonds, the second report is about the whole process of bond transactions, the third report is about the robbery of the employee provident fund, the fourth report is about how the funds obtained by bond proceeds to the central bank and the fifth report is auditing of the Central Bank bond scam of the infamous Arjun Mahendran. The COPE forensic audit report has confirmed the fraud committed by Arjun Mahendran and his group. The audit report confirms what we have revealed at a press conference at this same location once before. In addition to what we have presented the forensic audit have presented very scientific investigations. The fifth report could be presented to the courts and punish the bond perpetrators. The judicial inquiry can be used by the COPE report and the report of the Presidential Commission of Inquiry. President Gotabhaya Rajapaksa has a good opportunity to fulfill the aspirations of the people who voted for him.

How the EPF fund was plundered..

"What is important here is what happened to the EPF. The employee provident fund is a fund consist of Rs. Billion 2290. Monthly income of that fund is Rs. 12000 million. There are 18 million members. It is owned by the labour commissioner. The Central Bank of Sri Lanka acts as the trustee of that fund. However, the Central Bank cannot deliberately invest EPF money into businesses. There are special criteria followed for investments. According to the four-month analysis of the Forensic Audit Report, the EPF funds have been invested directly in 19 companies. Accordingly, a loss of Rs. 57950 million has been incurred. Who is responsible for these losses? The criteria for investments are given in terms of percentage of investments for companies. However, during the tenure of Ajith Nivard Cabraal he had made investments that exceeded these proportions. When the maximum limit is 2% there are investments done 10%, 30% and 40%.

Both Arjun Mahendran and Ajith Nivard Cabral are corrupt Some of these bond purchases are not made with their own money. Since the bonds are purchased from other sources, no settlements have been made for the relevant dates. Also, some notorious companies buy shares at direct placements for a higher price. It is through the persuasion of the Central Bank Governor to the Monetary Board. There are occasions when shares of Rs. 17 are bought at Rs.40 and sold for Rs. 22. The Governor of the Central Bank has taken these decisions as his own property. Both Arjun Mahendran and Ajith Nivard Cabraal have carried out such corrupt deals. Such transactions cannot be done without political power. This corrupt process has been followed since 2002.

Who is responsible for this? The Central Bank has an investment committee. The audit report states that the investment committee was influenced by the governors. Ajith Cabraal got panicked because these interventions have been carried out. Some of the officers have become helpless due to pressure from the governors. It is the people of our country who have suffered the consequences of these influences."

"The forensic audit report reveals a special revelation about the family tree of these bonds. Nivad Cabraal’s  sister Shiromi Wickremasinghe has been the director of the Perpetual Holding Company while Cabral was the governor of the Central Bank. His brother-in-law, Ravindra Balakantha Thambiah, a relative Nihal Fonseka, Amal Cabraal and daughter-in-law Shibhani Renuka Thambiah has also served as directors. Also during the Arjun Mahen was the governor his son-in-law from Perpetual Treasury Arjun Aloysius was been working. Arjun Aloysius is known as the bond king. In the days of Ajith Cabraal and Arjun Mahendran it was Arjun Aloysius who was named as the bond king.

If the judiciary of our country is independent, they can find out what happened to the money of the Central Bank. We request the media and social media activists of our country not to let this forensic audit go undermined. Former Central Bank Governor Kumaraswamy has fulfilled his responsibilities. He continuously insisted to put this report out. Now we can say the facts in this report are correct or wrong without looking at false as how this report was made. if the family tree is false Cabral can say whether Shiromi Wickramasinghe is his sister or not. We tell Nivad Cabral since your involvement was exposed in these corrupt dealings not to save Alosious, Despite Cabral got caught, the UNP cannot wash their hands from this corrupt dealings. That was the reason we continuously said that this is a group of thieves. It is sad to note that only thieves are controlling the financial sector in our country. Therefore genuine foreign, local investors and businessmen in our country gave up their investments. Some people left the country. These gangs of thieves are placed on top chairs of our country's financial institutions. Members of these gangs take over the head of the Central Bank. If this ring is not broken, the thefts that take place in our country cannot be corrected."

"There are several ways in which Central Bank bond transactions take place. The Central Bank deals with bonds with official institutions and with unofficial brokerage firms. The Central Bank benefits from dealing with official institutions. On average, there are about 16 brokers that deal with the Central Bank. Perpetual Treasury is a registered brokerage firm that does not meet the eligibility requirements. The Central Bank has carried out about 5600 billion bond transactions since 2002. 90% of those have been given to broker companies. 90% of them are direct purchases. The Central Bank's monetary board was not informed of these direct purchases made from 2008 to 2015. At least a director board paper has not been submitted. Public monies continued to be looted by these two families. That is why the Bond Kings have been able to commit financial crimes."

The 6.9 million thought only the frauds of Ranil Wickramasinghe, but..

"The Central Bank has been robbed in the broad day light by several government officials. Both these frauds should be prosecuted. As Minister of Finance Mahinda Rajapaksa can start these transactions from the start or from the end. There is a mandate given by the people to punish bond thieves. 6.9 million People thought that it was only Ranil Wickremesinghe stole them. However the forensic audit report confirms, there have been cases of thefts before 2015. Employee provident fund has been robbed. Therefore, we urge the authorities to take swift legal action against those thieves. Otherwise people think there is a difference in law for the ordinary people and for the white color criminals."

"We requested a parliamentary debate for this. The speaker promised he will give us a debate on the first week of February. Meantime the annexure for this report has not been presented to the parliament. We believe these annexure would be presented to the parliament soon. A parliamentary debate is good to comprehend the facts but what should be done is to take legal actions against this. Arjun Mahendran can be brought to Sri Lanka using the extradition law. If judicial action is delayed the public will have doubts as to whether the law would not be enforced against white collar thieves. Meantime we tell the people to hear this and to take them to the brain. Some people instead of hearing by ears they hear from their nose and take that to their heart. Therefore, we emphasize not to switch organs. We tell people to listen to what we say and make decisions with their brain ”

Below are the sketch of the family ring which plundered public money, and the forensic audit report can be read from the below link without its attachment. 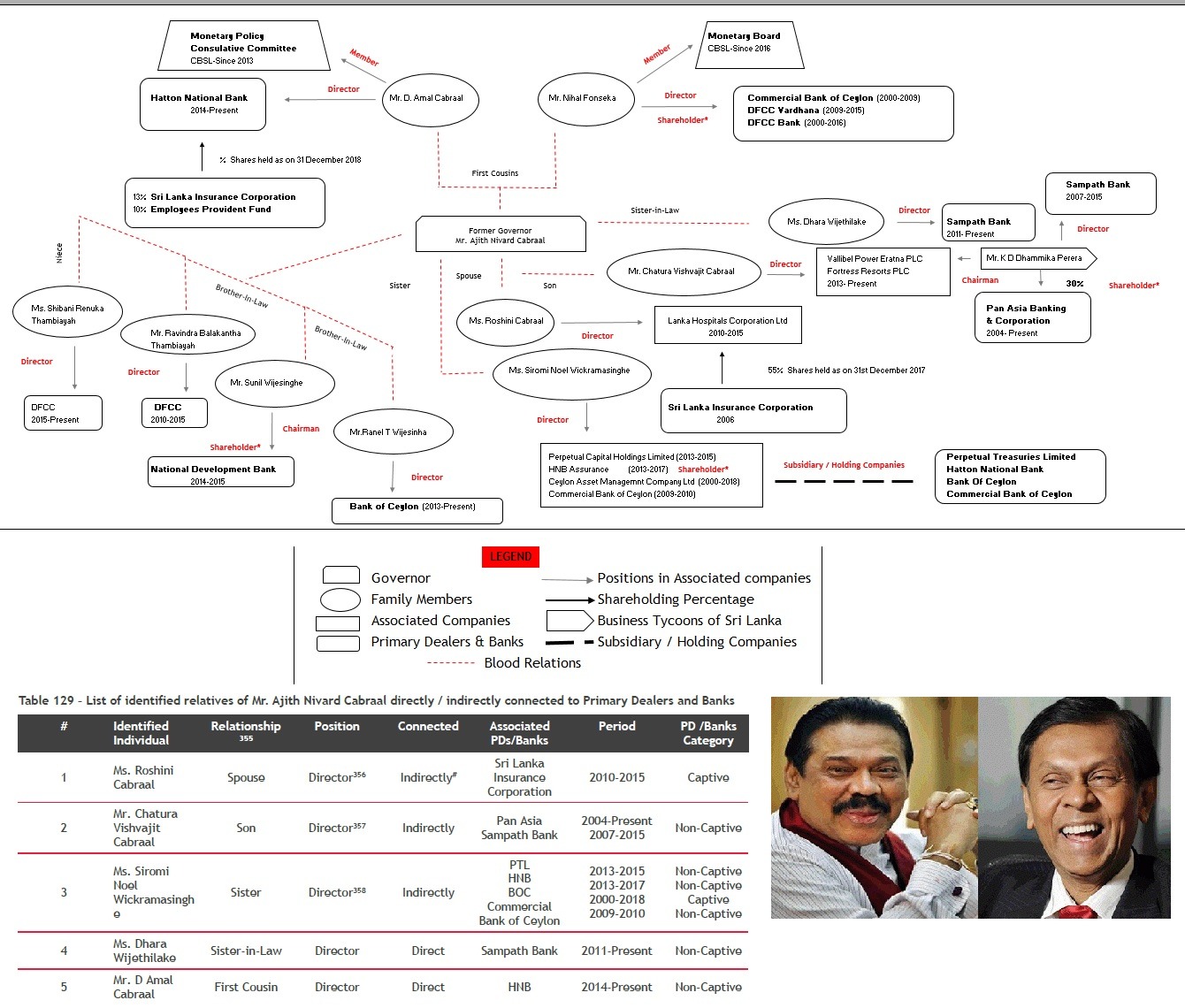