An exposure by the Jailor Podda 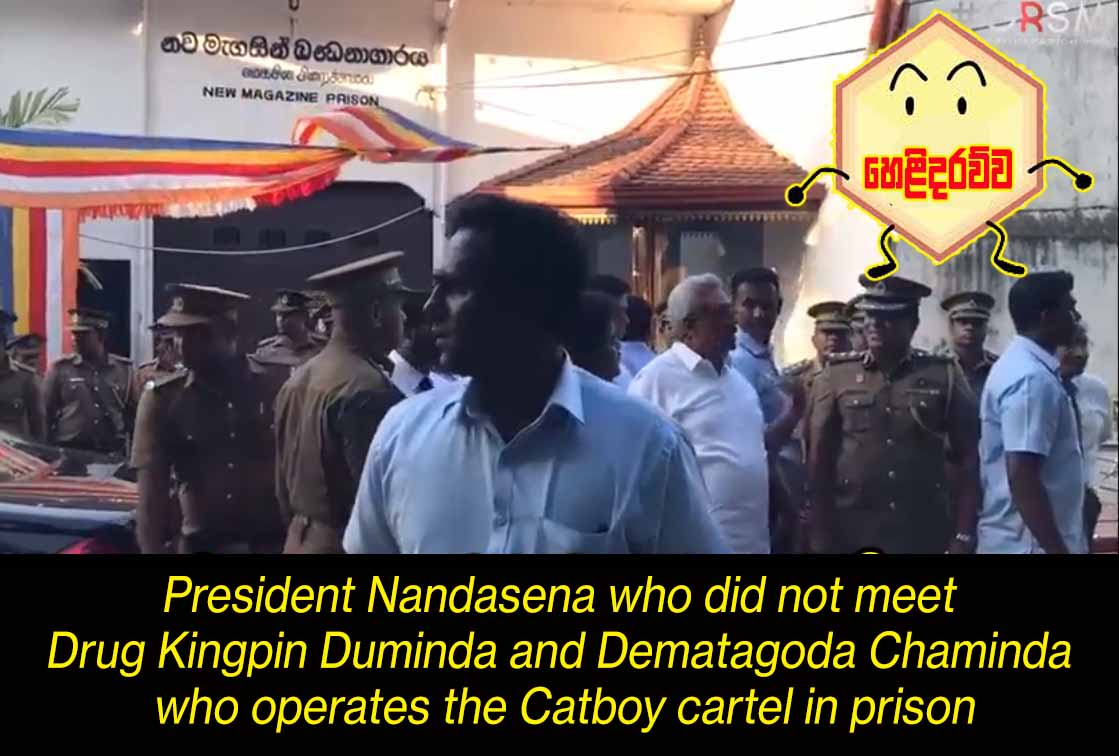 (Lanka-e-News -13.Feb.2020, 11.30PM) President Nandasena Gotabhaya Rajapaksa visited the Colombo prison recently. It would be great if he didn't go with the pre-planned cameras. However, it is our duty to expose him and to the public of the country the dangerous aspect of the development of the prisons, which he pretends to ignore.

The Colombo Remand Prison (CRP) and the Prison Hospital are completely controlled by these groups and the Prison Authority is the only the facilitator. For that, the prison officers are given many privileges and money.

Although all prisoners should have the same rights Duminda and his group is an elite class inside the prison. They receive meals from home, 24 hour visits, telephones and internet facilities at any time. Following the government change they could even visit their houses and can able to return to the prison after a sexual pleasure. Duminda Silva even had his birthday party at his home.

Prison officers who gourmandize with the underworld in one plate Prison Superintendent Samantha Alahakoon of the Magazine Prison, Superintendent of Prisons Sampath Warnakulasuriya and Chief Jailor Aravinda are the main partners of Duminda Silva.

Kosgoda Tharaka, a prisoner of the Duminda faction, is staying in Magazine Prison with his underworld force. The latter that is an accused for many crimes in the south was scheduled to send to the Boossa prisons but he remains at the Magazine prisons by force. Although the prisons authorities has made all documentation for his transfer, he remains at the Magazine prisons and distribute drugs and operate his underworld activities on behalf of Duminda Silva faction.

Recently Kosgoda Tharaka went through four cells and assaulted a prisoner inhumanly before the prisons officers. Some honest officers have become helpless as the law has worn out. It is common for underworld thugs to pose death threats to jailors who don’t comply and to threaten journalists who report incidents. Due to this many people are silent. Therefore Duminda Silva’s underworld has become stronger within the prisons.

Recently there was an attempt by a prisoner to kill another prisoner by injecting cyanide. The latter is Samantha Perera alias “Choova Samantha” is an underworld gangster and helper of Dumanda Silva faction. The victim prisoner was later transferred to another prison but the prisons officers could not take any action against Choova Samantha due to the power of Duminda Silva and Dematagoda Chaminda.

We have heard similar stories in the world in prisons controlled by the drug mafia cartel like Colombia and Mexico in South America. The same is now happening in Sri Lanka. What makes Sri Lanka so special than South America is that Duminda Silva's "Catboy Cartel" is the only underworld organization that owns a television channel in the world. In the recent past, a Buddhist monk of the Bodu Bala Sena Galabodaththe Gnanasara and a businessman spent time with these "Catboy Cartel".

After his release from prison, Gnanasara called a press conference and sympathized with Duminda and Chaminda. Gnanasara who met president Sirisena directly demanded the release of Duminda Silva. Meantime Magalkande Sudantha alias Begalkanda Dewadatta alais Priyawansa who was suspended by the police for stealing an expensive mobile of a senior police officer declared Duminda as a saint and he is ready to sacrifice his life for his freedom. He also works for the Catboy cartel group.

According to the businessmen Duminda Silva is an innocent who feeds the cats at home with chicken.

When all these equations are combined, Dematagoda Chaminda, Dematagoda Ruwan and Kosgoda Tharaka, the 'Catboy Cartel' team is under the protection of Duminda Silva who is invading the drug industry and most of the underworld due to political, media, religious and wealth power.

Although the names of the parties who elected him were in this vague equation, if he genuinely wants to change the country President Nandasena Gotabhaya Rajapakse should think about the future of the country he should pluck these pests from the bud. It is then that the country gets the real result of his prison inspection.