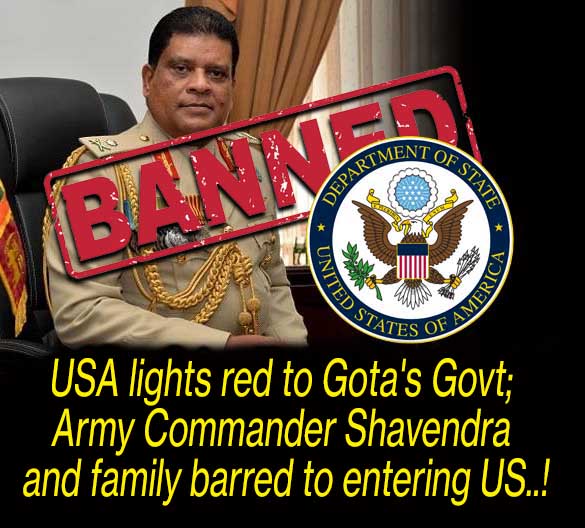 (Lanka-e-News -14.Feb.2020, 11.30PM) Commander of the Sri Lanka Army and Acting Chief of Defense Staff, Lieutenant General Shavendra Silva and his immediate family members have been barred to entering the United States. US state department's statement issued by Mr. Pompeo as follows;

Public Designation, Due to Gross Violations of Human Rights, of Shavendra Silva of Sri Lanka Under Section 7031(c) of the Department of State, Foreign Operations, and Related Programs Appropriations Act

The Department of State has designated Lieutenant General Shavendra Silva, current Commander of the Sri Lanka Army and Acting Chief of Defense Staff, as required under Section 7031(c) of the Department of State, Foreign Operations, and Related Programs Appropriations Act, due to credible information of his involvement, through command responsibility, in gross violations of human rights, namely extrajudicial killings, by the 58th Division of the Sri Lanka Army during the final phase of Sri Lanka’s Civil War in 2009.

We deeply value our partnership with the Sri Lankan government and the long-standing democratic tradition we share with the Sri Lankan people.  The United States remains committed to strengthening the bilateral relationship with Sri Lanka and helping reshape its security forces to tackle current and emerging threats.  Security cooperation will continue to emphasize respect for human rights as a fundamental component of our training, assistance, and engagements.

The United States will continue to use all available tools and authorities, as appropriate, to address human rights violations and abuses around the world no matter when they occurred or who perpetrated them.  Today’s actions underscore our commitment to support human rights, promote accountability for perpetrators, and encourage reconciliation in support of a peaceful, stable, and prosperous Sri Lanka.