An accused in a bribery case and a 'thief' who disappeared 80 lawsuit files takes up the Chairman of the Court of Appeal. 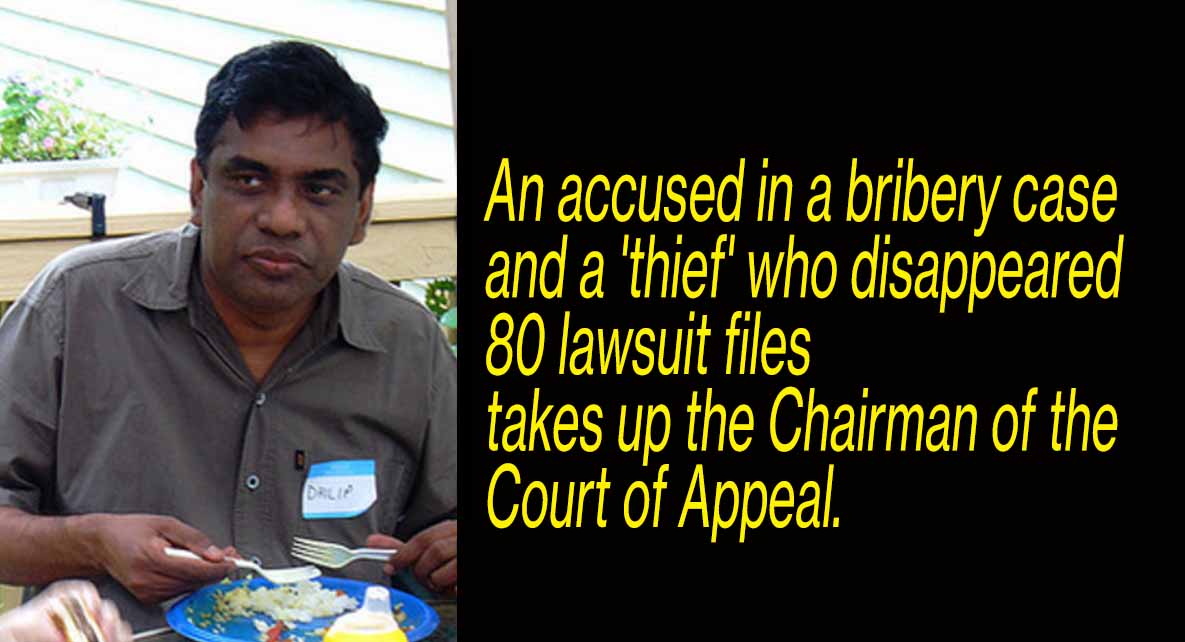 (Lanka-e-News -16.Feb.2020, 11.30PM) An accused of Rs 260 million bribery charges currently inquired in a magistrate's court was appointed as the Judge of the Court of Appeal. Law-abiding people will surely question in which tribal country the rule of law is. The answer is Sri Lanka, which is said to be the pearl of the Indian Ocean.

Following the death of the Supreme Court judge Prasanna Jayawardena, the chairman of the appeal court Yasantha Kodagoda was appointed for the vacant position and then the chairman position of the court of appeal became vacant. To fill the position president Nandasena Gotabaya named only one judge to the constitutional council. That is none other than A.H.M. Nawaz who is the speaker of this news. Unfortunately the constitutional council too approved the name and Dilip Nawas was appointed the president of the court of appeal. It is amazing that the legal community has not yet spoken about this grossly corrupt appointment. Dilip Nawaz is the worst corrupt villain we know in the world for the following reasons.

The history of Dilip Nawaz..

Dilip Nawaz was appointed as a judge of the Court of Appeal on September 17th 2014, when the Rajapaksa regime was in the throes of death. At the time, Dilip Nawaz was a Deputy Solicitor General in the Attorney General's Department. His area of law was international trade law. At that time there was no 19th amendment and judges of the Supreme Court and the Court of Appeal were appointed by the President. President Mahinda Rajapaksa who was on last moment of his Prsidency, appointed Dilip Nawaz as a judge when the latter was 18 positions below the seniority of the Attorney General's Department. From that, one can see how obedient Rajapaksa stooge he is.

The first corruption Dilip Nawaz did..

He was the deputy solicitor general at the time when the CID was investigating about a corruption against him. It was nothing but a fraud of Rs. 260 million by LECO (lanka electricity Company) during 2010 when MMC Ferdinando was secretary of the Ministry of Power and Energy. When the CID initiates an investigation into a large scale fraud, a letter is sent sorting Attorney General's advice. Eva Wanasundara was the Attorney General at the time. Before Eva Wanasundera received the letter from CID, Dilip Nawaz had taken the letter and sent a reply to the CID on bahlf of Eva Wanasundera. It said, "This investigation cannot be carried out any more." The CID officers were surprised reading the response and asked Eva Wanasundera. She has said she did not know such a thing and that she had not sent such a letter to the CID. Subsequently, an investigation was launched against Dilip Nawaz for abusing the Attorney General's powers by forging a fake letter.

Dilip Nawaz escaped imprisonment for a double-fraud, sending a fictitious letter as the Attorney General to halt the investigation, which involved a Rs. 260 million fraud. Thereafter, Mahinda Rajapakse appointed Dilip Nawaz as a judge of the Court of Appeal on September 17th 2014.

Bribery Commission files case against an officer at the Attorney General's Department for the first time...

Anyway it is a Guinness records that Dilip Nawaz, who had been suspended the bench for more than two and a half years, became the president of the Court of Appeal.

Dilip Nawaz is another wonderful judge. Since his appointment as a judge of the Court of Appeal, he has not written verdicts for more than 80 previous cases. Although the verdicts were pronounced in open court, they had been avoiding writing the verdict for over 2 years. The worst case scenario is that even the case files of those cases have disappeared. A hero who came to create a law-abiding country has appointed such an unethical president to the Court of Appeal.

Dilip Nawaz has been a member of the Board of Examinations of the postgraduate degree in Law College or the LLM. He has illegally passed a person who had not even sat for the examination. When questioned by other candidates the scam came to light. Candidates sued Dilip Nawaz in court. It was then the former Chief Justice-turned-Mohan Peiris, who had come to his rescue. The latter rescued him by removing him from the post of Examiner without being punished for his fraud.

Another corruption reveals how Dilip Nawaz is a psychopath. He once worked as a State Counsel in Ampara courts. Once he was called to Colombo by the attorney general. The latter came to Colombo by calling a bus from the Ampara bus depot for only him. He acted as a attorney general The fraud of Dilip Nawaz was exposed when the depot asked the Attorney General's Department the bus fare from Ampara to Colombo. There again he was prosecuted. Once again the same former chief justice Mohan Pieris who was a lawyer at that time appeard and defended him.

Despite being aware of international trade law the person who was sworn today as the President of the Court of Appeal is a fraudster, corrupt and a thief.

With such appointments, the Constitutional Council should be held accountable with President Nandasena for destroying the dignity of the judiciary of the country before the international community.