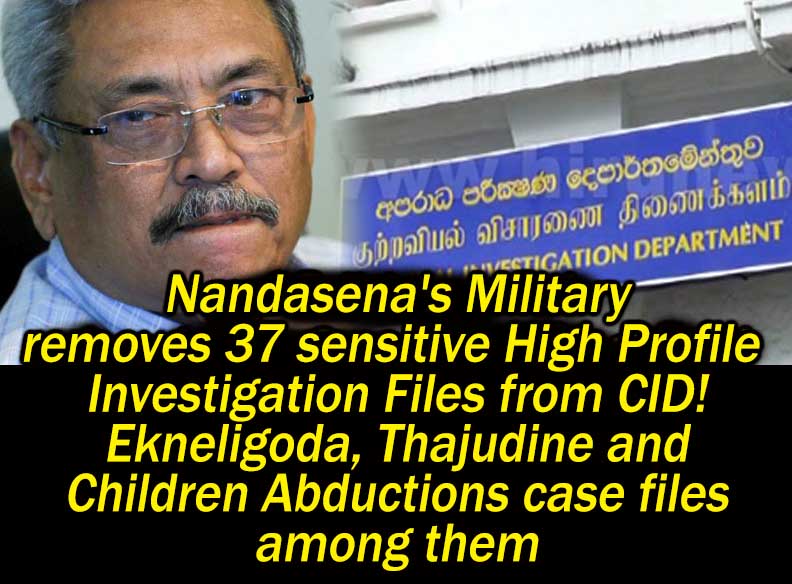 (Lanka-e-News- 27.Feb.2020,3.55PM) While militarising entire law enforcement sector, Military Intelligence arm of the Nandasena Rajapakse government, removed original investigation files relating to 37 high profile sensitive from the CID. The most respected and effective police Division of Sri Lanka police, established for the purpose of civil law enforcement in 1797,  was Criminal Investigations Department, which has never been subject to such external interference before. The removal of police investigative files by the Military is unprecedented and unlawful.

It is significant to note that this unlawful move happened on 25th February, just one day after President unlawfully appointing a six-member military intelligence Unit, headed by the head of Military Intelligence Major General Jagath Alwis,  to supervise the CID  investigations into the Good Friday Bomb.  A few days ago, Lanka E-News warned the public of the illegality of the appointment of military Intelligence to oversee police investigation.

It appears that the purported reason for the removal of the files is on the direction of the infamous Presidential Commission consisting of Upali Abeyratne (Piissu Pusa), Retired Court of Appeal Judge Daya Chandrasiri Jayathilaka and retired Inspector General of Police Chandra Fernando who is appointed to examine political victimisation. These three commissioners were well known corrupt individuals who were benefited under previous Rajapakse regime and were close associates of Rajapakse family.

Among the case material removed by the Military intelligence were the case registers, which maintains the movement of files. These files cannot even be removed by the IGP and no entry has been made when removing these files. Production registers relating to the 37 files had also been removed.  Most of those cases are on going trial in High Courts and the investigation officers will have to now give evidence without relevant documents.

It is now confirmed that among the files so removed include investigations relating to the abduction of Prageeth Ethneligoda by Military Intelligence, the assassination of Lasantha Wickramatunga at the instigation of the current President and the abduction of school children by Navy Intelligence.

What President did was to completely destroy the CID by transferring the most effective and steemed  Director Shani Abeysekara to a peon position out of CID. Later he was interdicted on trumped-up charges.  Thereafter, an unprecedented travel ban was imposed on all CID staff members., including 11 CID retired investigators. This was followed by bringing into CID 43 police officers serving in the police division giving security to Rajapakse family. The most significant transfer was to appoint as OIC of the Homicide Unit one `Seram`, who has only been trained to salute politicians and to carry out orders of Rajapakses family. He had only served previously in the Ministerial Security Division and Presidential Security Division. All the files so taken by the Military Intelligence, that were in the custody of Seram.

It is disturbing that there is not a single Opposition Politician who is courageous enough to express their resistance to  Rajapaske's militarization of police. Those the Opposition should challenge Nandasena's government, Opposition leader is now sleeping in the comfort with Killy Maharaja. Thus we hope the opposition must now consider wearing a Lightning conductor helmet for protection against thunder!