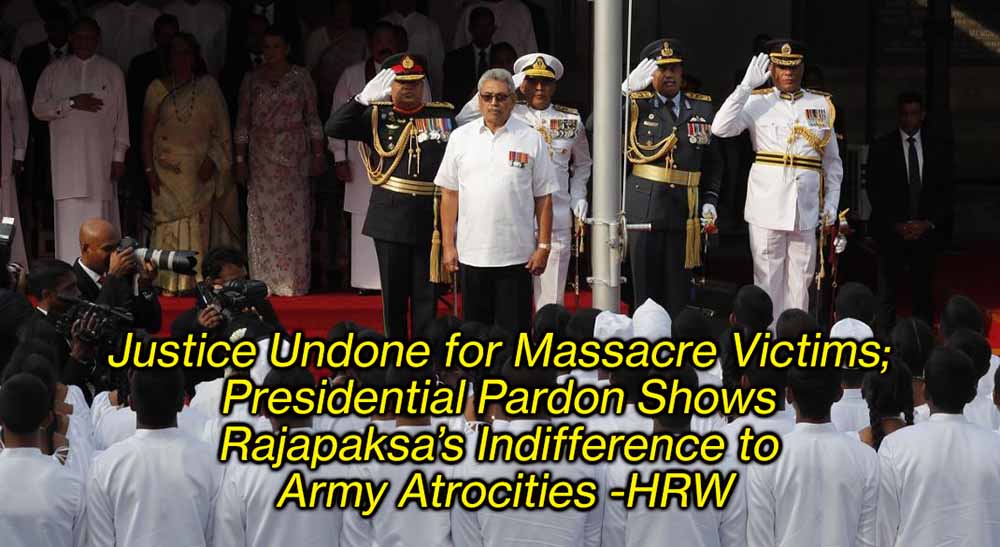 (Lanka-e-News -28.March.2020, 12.25PM) Sri Lankan President Gotabaya Rajapaksa’s pardon of a soldier convicted of massacring eight civilians, including children, shows the administration’s disregard for justice for the worst abuses, Human Rights Watch said today. The conviction of former Sgt. Sunil Ratnayake had been one of the very few cases of security force personnel being criminally punished for civil war-era atrocities, despite the huge number of credible and extremely serious allegations.

Ratnayake, who was pardoned on March 26, 2020, was found guilty in 2015 of killing eight civilians, including a 5-year-old, at Mirusuvil, in northern Sri Lanka, in 2000. The bodies of the victims showed signs of torture. The conviction had been upheld by Sri Lanka’s court of appeal.

“The Gotabaya Rajapaksa government couldn’t make it any plainer to victims and their families that it opposes any form of justice for even the worst atrocities,” said Meenakshi Ganguly, South Asia director at Human Rights Watch. “Concerned governments need to take the government’s own message on board and respond appropriately to uphold basic human rights protections and prohibitions on war crimes.”

Both government forces and the successionist Liberation Tigers of Tamil Eelam (LTTE) were implicated in numerous abuses during the conflict, which ended with the LTTE’s defeat in 2009. Gotabaya Rajapaksa was defence secretary during the final stages of the civil war, when the United Nations has found that tens of thousands of civilians were killed, hospitals were shelled, and prisoners were summarily executed. He came to office as president in 2019, promising to release “war heroes” who had been imprisoned on “false” charges.

“The Presidential pardon is an affront to victims and yet another example of the failure of Sri Lanka to fulfil its international human rights obligations to provide meaningful accountability for war crimes, crimes against humanity, and other gross violations of human rights,” noted a statement from UN High Commissioner for Human Rights. “Pardoning one of the sole convicted perpetrators of atrocities committed during the Sri Lankan conflict further undermines the limited progress the country has made towards ending impunity for mass human rights abuse.”

Since taking office, President Rajapaksa appointed army chief Shavendra Silva, who faces credible allegations of war crimes, as his chief of defence staff. In February, Silva was banned from entering the United States due to the allegations against him. Rajapaksa has also appointed retired general Kamal Gunaratne, who is implicated in alleged war crimes committed by the army’s 53 Division, which he commanded, as defence secretary. Gunaratne is currently leading the government’s task force to combat the COVID-19 pandemic.

In February, the Sri Lankan government withdrew from its commitments under a UN Human Rights Council resolution that included provisions for justice for abuses committed by both sides during the civil war. That resolution, which was passed by consensus in 2015 and reaffirmed as recently as 2019, represented the commitment of UN member states and their strategy for upholding international human rights and humanitarian law for civil war-era violations.

“The Rajapaksa government has appointed alleged perpetrators of war crimes to high office while pardoning one of the few soldiers convicted for a terrible offense,” Ganguly said. “It should be clear that to deliver justice for victims and to deter future atrocities, an international justice mechanism is needed in Sri Lanka.”