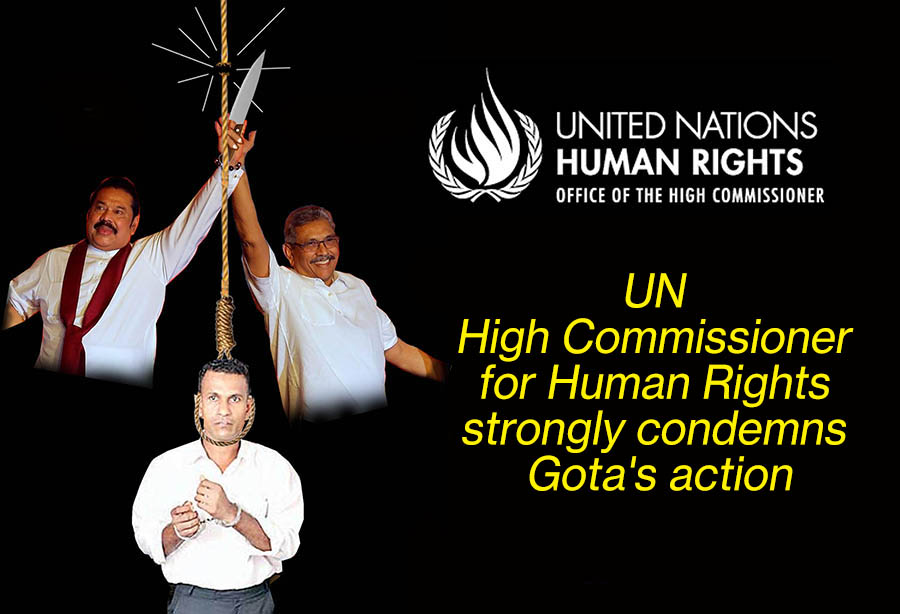 (Lanka-e-News -28.March.2020, 12.45PM) The Sri Lankan president has been criticized by the United Nations for abruptly releasing an army officer who was sentenced to death by the courts.

Spokesperson for the UN High Commissioner for Human Rights,  Rupert Colville has release the statement about this as follows;

We are troubled by reports that the convicted perpetrator of the Mirusuvil massacre, in Sri Lanka, has received a Presidential Pardon and was released from jail this week.

Former Army sergeant Sunil Ratnayake was sentenced in 2015 for the murder in 2000 of eight civilians, including a five-year-old child, after more than a decade long trial. Five defendants were brought to trial but only Sgt Ratnayake was convicted. The conviction was confirmed by the Supreme Court of Sri Lanka in May 2019.

This was one of the rare human rights cases from the decades long conflict that had ever reached conviction.

The Presidential pardon is an affront to victims and yet another example of the failure of Sri Lanka to fulfil its international human rights obligations to provide meaningful accountability for war crimes, crimes against humanity and other gross violations of human rights. Victims of such violations and crimes have the right to a remedy. This includes equal and effective access to justice and reparation, and that perpetrators serve a punishment that is proportionate to the seriousness of their conduct.

Pardoning one of the sole convicted perpetrators of atrocities committed during the Sri Lankan conflict further undermines the limited progress the country has made towards ending impunity for mass human rights abuse.