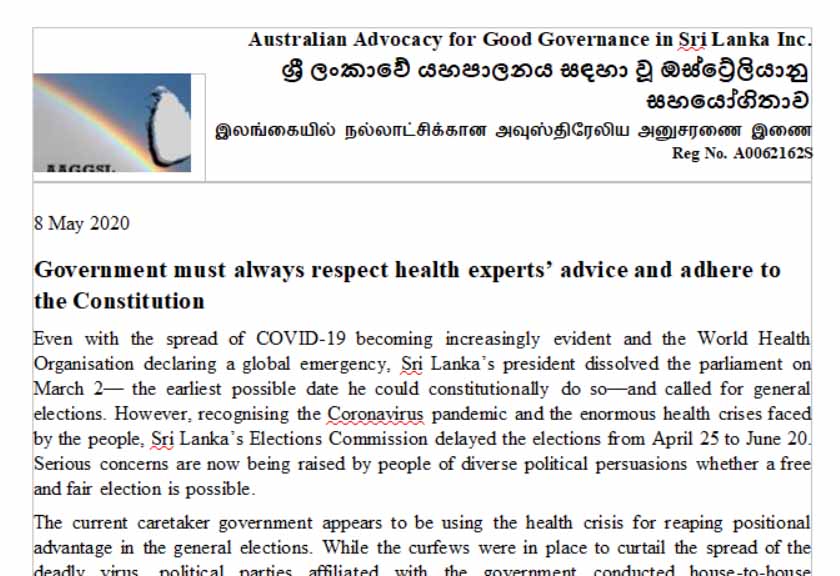 (Lanka-e-News -09.May.2020, 11.00 PM) Even with the spread of COVID-19 becoming increasingly evident and the World Health Organisation declaring a global emergency, Sri Lanka’s president dissolved the parliament on March 2 -the earliest possible date he could constitutionally do so- and called for general elections. However, recognising the Coronavirus pandemic and the enormous health crises faced by the people, Sri Lanka’s Elections Commission delayed the elections from April 25 to June 20. Serious concerns are now being raised by people of diverse political persuasions whether a free and fair election is possible.

The current caretaker government appears to be using the health crisis for reaping positional advantage in the general elections. While the curfews were in place to curtail the spread of the deadly virus, political parties affiliated with the government conducted house-to-house campaigns and even meetings to bolster their election victory. It is widely reported that politicians allied with the government distributed COVID-19 relief packages countrywide. Many see this as the worst form of coercion – indeed bribery – to extract political favour from the most impoverished and vulnerable people of the country. Those who criticised such questionable relief and financial hardships programmes were met with heavy-handed police response.

In a parliamentary democracy, government must remain a “government of the people, by the people, for the people”. If there ever was a better time to put the people first in Sri Lanka, it is now. It is essential that the government exists with the consent of the governed - this government is yet to test that - and respects not only those who have voted for it, but also other voters and their representatives.

Article 70(5) of the Constitution stipulates that with the dissolution of parliament, president should fix a date for the first sitting of the new parliament and that this date should fall within three months of the proclamation of the dissolution. Accordingly, the new parliament must sit before 2nd June 2020. With the polls set for June 20, this is on course for a constitutional dilemma. Almost all opposition parties are now appealing for the recalling of parliament so that proper constitutional process can be followed consensually. Also, according to Article 148––‘parliament shall have full control over public finance’. To maintain public services and address the current serious health emergency, the only option available is to table Supplementary Estimates and have it passed by majority members in the parliament. Article 70(7) enables the president to do so.

The constituencies are suffering due to social distancing restrictions, prolonged curfews, and loss of employment.  Front line health workers lack reliable personal protective equipment, face high risk of contracting the Coronavirus and endure increased mental health issues. Understandably, the country appears to be in no mood for a General Election at this juncture and the possibility of conducting COVID-safe election campaigns is very remote.

With fear and anxiety all around, the public’s ability to make an informed choice at the polls, or even the desire to participate, is dissipating. Now is the time to build consensus among politicians and bureaucrats, not divide the people or suppress their civil rights or resort to PTA to silence potential political opponents. A poll conducted with disdain for the feelings of the electorate and against the wishes of the opposition parties will be regarded with suspicion and scepticism.

The Coronavirus emergency has defied many a norm throughout the globe. And Sri Lanka stands to learn from governments around the world which have done well by taking a considered bipartisan approach on civil and economic matters and adopting advices given by medical advice from experts, supported by civil administrators and security forces.

Not coercion, but cohesion is the need of the day. At a time of unprecedented health and economic calamity, this is a patriotic responsibility of rational leaders.