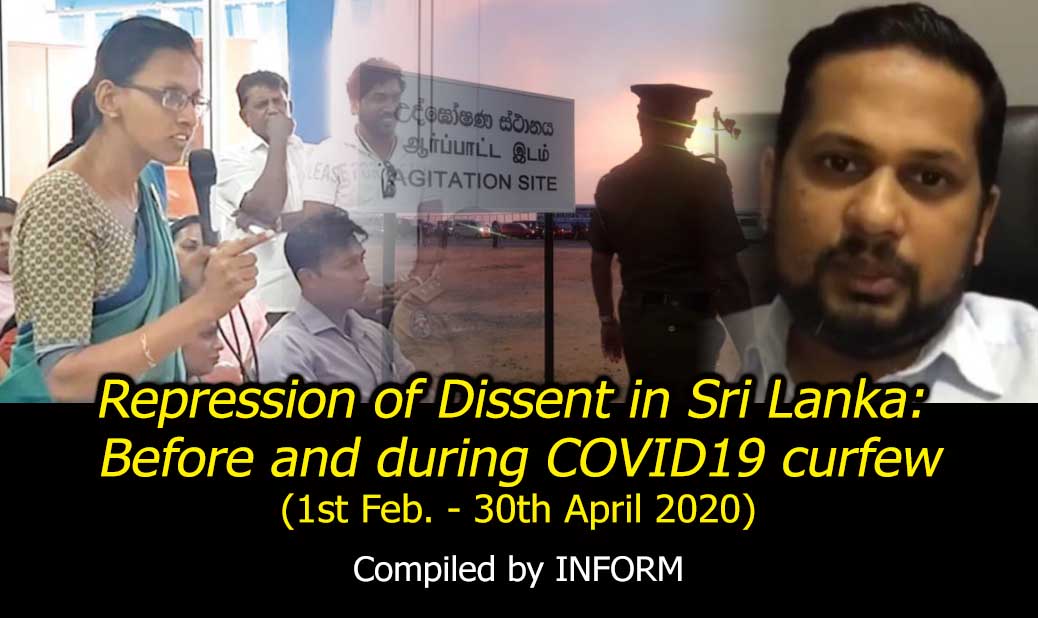 Journalists faced questioning at home, by phone and summoning to offices of the Criminal Investigation Department (CID) of the police. There were also death threats against journalists by a son of a politician and a shop owner. A journalist and a source were also arrested, while another journalist was assaulted. A private TV station had expelled journalists who had exposed a special event organized by the institution violating curfew laws and for requesting protective equipment.

Two prisoners were shot dead in tensions that had arisen in context of covid19 related protests in a prison in Anuradhapura. In Colombo, protesters were assaulted and threatened with arrest by police and a temporary hut of protesters were taken down by police. Persons protesting on covid19 related issues were also arrested in Batticaloa and Kandy districts. A court order was issued to stop a student protest in Colombo and students in Jaffna University were stopped from entering the University to have a protest.

On 1st April police announced that those criticizing and pointing shortcomings of government officials will be arrested. At least 17 persons had been arrested by 19th April for fake news and the Human Rights Commission had expressed concerns about legal basis for some of the arrests. Amongst those arrested was Ramzy Razeek, a commentator who regularly posts on his Facebook profile on topics related to ethnic harmony, minority rights, gender etc. At least two persons were arrested for publishing online content criticizing the government’s covid19 response. A student activist’s house was visited by the police after he had posted a Facebook comment questioning the government. A former MP of an opposition political party and LGBTIQ community, including one activist were subjected to online hate speech campaigns. Two potential Tamil female candidates, for upcoming parliamentary elections faced vicious personal attacks online. Such attacks, as well as a number of fake news and hate speech content, mostly against minorities, published or broadcasted by mainstream media with large outreach, didn’t seem to result in legal actions.

In other incidents, a leader of an indigenous community (Vedda) was attacked after he spoke to the media criticizing sand mining in the local area and its damages to the environment. A businessman was assaulted and CCTV camera equipment at his house were damaged by Police after he questioned about Police violence against two other persons in his neighborhood. A lawyer who had appeared in significant cases related to rights and democracy and vocal on minority rights, was arrested on suspicion of terrorism and he has not been provided proper access to lawyers nor been produced before a Magistrate. Visits by intelligence agencies to offices of NGOs, houses of NGO staff and phone calls continued. A female activist vocal in demanding investigations into a child abuse case was threatened that her nude photographs will be made public. Police also held an inquiry against an information technology activist after he pointed security loopholes in an ATM machine of a private bank.

A number of legal and policy changes, including appointments, looked ominous for dissent. The Government declared it was withdrawing from the co-sponsorship of the UN Human Rights Council resolutions on reconciliation and accountability. The President’s office and Parliament Committee on National Security indicated restrictions on civil society and NGOs. A senior district level government official issued a letter asking NGOs to de-prioritize human rights, women’s empowerment and land rights. Activists who defied the decision to sing the national anthem only in Sinhalese at the official Independence Day function faced online threats and vilification. An Army officer being prosecuted for killings of protesters in 2013 was promoted. The police chief requested to temporarily suspend some ongoing legal cases and an investigation officer who handled a key corruption case for several years was suddenly replaced with a new officer. And President Gotabaya said that the 19th Amendment to the Constitution, which had reduced presidential powers and strengthened independent oversight bodies, are a hindrance in fulfilling the aspirations of the people, at a meeting with heads of media.

Government officials trying to do their duties, including police officers, public health officials, village officers (Grama Niladharis) excise officers, forest conservation officers, coastal conservation officer, and a school principal faced reprisals. These included verbal attacks with obscene language, physical assaults, and threats including a death threat at gun point. Politicians, a Buddhist Monk and agitated villagers were amongst those responsible. Many of these incidents were related to environmental issues and covid19.

Especially during the curfew period, restrictions and limited court work made it difficult for victims to seek protection, legal remedies. It was also difficult to seek and offer support from other defenders, lawyers, journalists diplomats etc. Detainees faced more challenges.