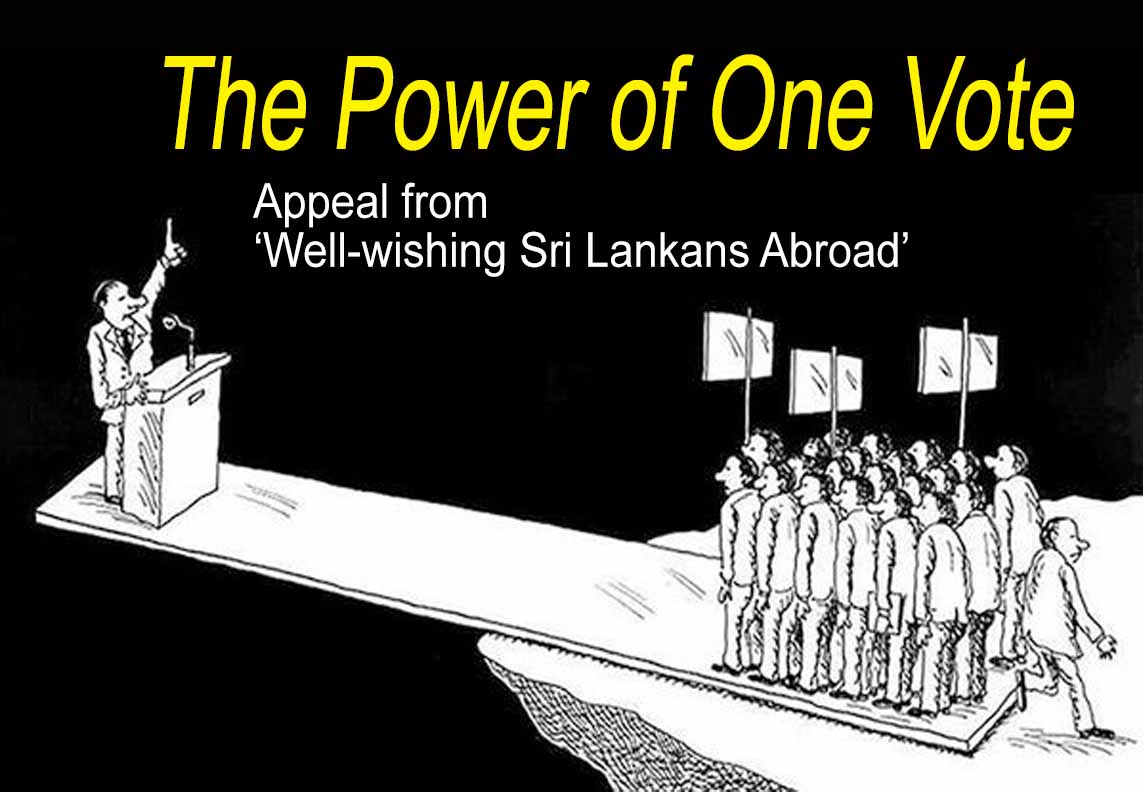 (Lanka-e-News -12.July.2020, 3.10AM)  After lengthy debate, confrontations and legal challenges, Sri Lanka’s 16th parliamentary election is set for August 5, 2020. Many are waiting with excitement to exercise their democratic right to elect the legislature that will decide the destiny of the country for the next 5 years. All the same, those who are confused and overwhelmed by a myriad of false promises and misleading media campaigns would rather let others decide for them their political future. Much is expected of such dejected and disinterested voters, for it is they who could in fact make a significant impact on the outcome of this historic election.

In a democracy, when things go wrong the people should set them right by the peaceable use of their franchise. That is the power of your vote, and now is the time to exercise that power, proudly and prudently.

The caretaker government’s declared intention to ditch the 19th Amendment to the Constitution is a bold attempt to remove all ‘checks and balances’ so painstakingly incorporated into the constitution. It is not difficult to contemplate a continuation of the astounding greed, executive fiats and condescension that prevailed in the decade prior to 2015, should they be re-elected to govern the nation.

The calculated and misleading campaign that an authoritarian rule would ensure security and economic development for Sri Lanka is aimed at institutionalizing a culture of impunity and repressive social order. There are several issues at stake in this election, but a few stand out in particular:

What is in the offing?

In a multi-ethnic, multi-lingual, and multi-religious society like ours, the best security comes from inclusivity, tolerance, and consensus-building.

A strong democratic system, not an autocratic system, that will deliver a fairer future, peace, and prosperity to our country. If a government is afraid of ‘checks and balances’, transparency, and accountability, do not entrust them with power to rule over you with tyranny.

Rather, this is the time to ensure that militarisation and authoritarian rule does not rear its ugly head ever again. Casting your votes ignoring this possibility and taking a chance is not a wise option. Think of those bad times. Unbridled executive powers; bribery; corruption; fearful, self-censoring media; legislative interference with judicial functions; unfair persecution of minority communities … and so on. Can we prevent this from happening again?

“Yes, we can”. Should we not give the country and its multi-ethnic society some reason for hope? Each of the voters can.

So, let us not fail ourselves on August 5. We owe this historic duty to ourselves and the generations to come. Civil society actors must get involved in educating the people the importance of voting with their feet, keeping the long-term best interest of the country at heart.

How your garden will look will depend on the seeds you carefully select and plant. How your futures will unfold will depend on the decision you make on Wednesday, 5 August. It will fundamentally shape our society, economy, and your children’s future, for years to come. There is no excuse to waste away your precious vote. Rather, study the candidates, know their motives, assess their credibility, reject those candidates who are known criminals, and cast your vote conscientiously for the most capable and honest candidates.

Each of your vote matters and each one of you can make a difference.

So, go and vote, and let your voice be heard. In the absence of civil liberties, democracy, accountability, respect for human rights, and justice – economic prosperity and security can only be a pipe dream.

Australia, Canada, Europe and the UK

On behalf of Convenors
Melbourne, Australia